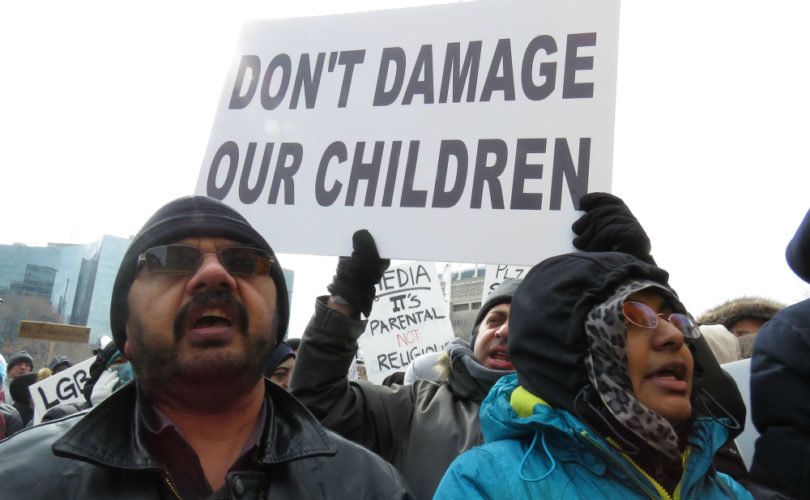 TORONTO, ON (LifeSiteNews) – Several hundred upset parents converged on the Ontario legislature earlier today, February 24, to protest the Liberal's new sex-ed curriculum, which was released the day before.

While speakers at a makeshift podium faced a huddle of media cameras, and fought to keep their papers from blowing away in the sharp wind, people on the edge of the rapidly growing crowd turned spontaneously to face Queen’s Park and began chanting vigorously “We say no! We say no!”

According to emcee and organizer Sam Sotiropoulos, a former trustee with the Toronto District School Board, the rally’s genesis was one parent, Sandra Hamill, who advertised it on Facebook several weeks ago, and “it just exploded.”

“It shows clearly the power of social media” to bring parents of like mind together, Sotiropoulis told LifeSiteNews, adding that this is “just the tip of the iceberg, the beginning of our movement” to oppose a curriculum that was “shoved down our throats.”

“This is not a gas plant, this is not the blowing of a billion dollars that most people can’t even comprehend,” he said, referring to past scandals that have dogged the Ontario Liberals. “This has to do with people’s children. This strikes right into the hearts of our homes and our families.”

The nearly two-hour rally included remarks from MPP Monte McNaugton (Lambton-Kent-Middlesex) and MP Patrick Brown (Barrie), both of whom are running for the leadership of Ontario’s PC Party, as well as Farina Siddiqui, co-ordinator of the Greater Toronto group Coalition of Concerned Parents, Jack Fonseca of Campaign Life Coalition, a representative of the Russian Canadian Congress, and parents Claudia Rulli and Tatiana Zhadanova.

Fonseca said what the Liberals released February 23 is “word-for-word the same controversial curriculum presented in 2010, at the same inappropriate age levels.  The only difference is that Kathleen Wynne has added some new goodies to make it even more sexually explicit, more age-inappropriate and to even more aggressively target the parent’s moral beliefs for eradication.”

Both Fonseca and parent Claudia Rulli pointed out that Ben Levin, who was deputy minister of education when the 2010 curriculum was developed, has now admitted to asking a mother to sexually assault her child for him. (Levin will plead guilty March 3 to three charges involving child pornography.)  Rulli rhetorically asked if Premier Wynne “really expected parents to believe” that Levin “did not have a hand” in the sex-ed curriculum.

“Premier, we will not co-parent with you,” she declared, to cheers of the crowd, “This sex education curriculum is tainted, and the only solution is to scrap it altogether.” A mother of a two-year-old son and a five-year-old daughter, Rulli objects to the government telling her how to teach her kids about sex, and pointed out that Education Minister Liz Sandals hasn’t even read the curriculum because “in her own words, ‘people don’t expect me too.’” Rulli said she was tempted to send Sandals the curriculum “in graphic form” to spare her the trouble of reading it, but that the material would be too “offensive and pornographic.”

“I’m not afraid to talk to my daughter about sex, but when it’s time,” she told LifeSiteNews. When she heard about the rally through Facebook, Rulli decided to speak up “for my kids. What they’re learning is inappropriate, and we were not consulted. The parents who were picked were cherry-picked.”

Ontario PC leadership hopeful Monte McNaughton, who exhorted parents to fight the curriculum, later told reporters he is the only MPP publicly objecting to the sex-ed curriculum. “I stand shoulder to shoulder” with parents, he said, adding, “I’ve got a message for Kathleen Wynne: ‘the real consultation begins today.’ She’s got no choice but to listen to parents.”

McNaughton brushed off a reporter’s remark that he is singling out Kathleen Wynne because of her “sexuality” – the premier is openly lesbian – replying that he is singling her out because she is “embroiled in scandal,” was responsible for the 2010 sex-ed curriculum as then-minister of education under Dalton McGuinty, and because she said “she would seek meaningful consultation” and has not.

Barrie MP Patrick Brown, another PC leadership hopeful, told the crowd that “teachers should teach facts about sex education, not values. Parents teach values.” He derided Wynne for thinking she “knew better than parents,” and said that parents must be the ones who decide what is age-appropriate, and should be told in advance what is being taught so they can withdraw their children from class if they wish to.

Tatiana Zhadanova also spoke, and later told LifeSiteNews she heard about the rally on Facebook, and became involved because, “I’m a concerned parent and want to know what is going on with my child.”

Sam Gayed, a Coptic Christian, told LifeSiteNews he was there out of worry for his four-year-old daughter. “It’s not good for children to be exposed to this kind of teaching at an early age. It’s the suitable age for them to play with dolls and teddy bears, not to learn about sex and homosexuality,” which is “completely wrong.” Gayed, who carried an icon of Jesus Christ, added, “My wife told me we may decide to go outside of Ontario because of this.”

Parental opposition is galvanizing in other ways as well. Parents as First Educators (PAFE) has an online petition which has 45,613 as of this writing, and just one day after its launch on February 23, a LifeSiteNews petition has been signed by over 15,000, and the number is climbing steadily.

Nor is opposition to the sex-ed curriculum confined to one specific faith or culture. A busload of Muslim parents from the Dar Foundation traveled to Queen’s Park from Oakville, and Sotiropoulos believes that “every single faith, as well as agnostics and atheists” were represented at the rally.