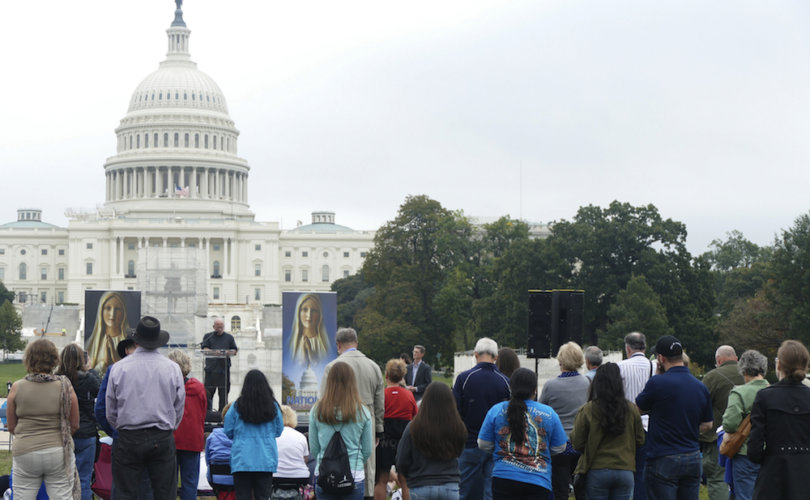 WASHINGTON, D.C., October 7, 2016 (LifeSiteNews) — Hundreds of Catholics gathered in front of the U.S. Capitol to pray all four rosary mysteries Friday, concluding a 54-day novena for the nation. Organizers say thousands of Americans have prayed for life, marriage, and religious freedom.

Clouds and a threat of rain at the beginning of the event turned to sunshine just as the crowd began the fourth and final rosary, the glorious mysteries.

Participants traveled from Wisconsin, Colorado, North Carolina, and other parts of the country for the rally, which was on the feast day of Our Lady of the Rosary. There were many small children and adolescents in the diverse crowd.

One pilgrim was Father Gary Selin, who teaches at St. John Vianney Seminary in Denver, Colorado. He told LifeSiteNews he was most struck by the unity among the people praying and the vital connection between the Eucharist and pro-life activism. The Catholic Church teaches that the Eucharist is the literal body, blood, soul, and divinity of Jesus Christ.

“Even though we have not met before, we are one in the Body of Christ,” Selin said. “That unity is found … through the Eucharist [and] in Our Lady. Our Lady always brings us to focus on the Holy Eucharist … the Eucharist is the most precious reality in our life. The most vulnerable person in the whole universe is Jesus Christ in the Eucharist. And for that reason, there’s a close connection between Eucharist and pro-life.” This is because “the pre-born children in their mother’s womb are likewise vulnerable, and so there’s a connection of life between the two,” Selin said.

Father Stephen Imbarrato of Priests for Life led participants in praying the joyful mysteries “for a ‘yes’ to life from conception to natural death.” Austin Ruse, the president of the Center for Family and Human Rights, and wife Cathy Ruse, a senior fellow at the Family Research Council, led the crowd in the luminous mysteries “for families, supernatural grace, and the sacraments.”

Led by Doug Barry of Battle Ready and an EWTN co-host of “Life on the Rock,” the crowd prayed the sorrowful mysteries for “religious freedom and an end to religious persecution.” He stressed that America is not in a good place spiritually, partly thanks to the imposition of same-sex “marriage,” and that this fall Catholics must pray diligently.

Brice Griffin, a pro-life activist from North Carolina, told LifeSiteNews she and her family welcomed the “opportunity to gather with fellow Catholics and pray publicly, especially for healing for our nation, an end to abortion, [the] sanctity of life, [and the] sanctity of marriage.”

Despite how culturally dark the world might seem, “We’re not allowed to live in a bubble,” Griffin said. “We are called to evangelize and above everything else we need to … spread the Gospel. We can’t do that by being hermits.”