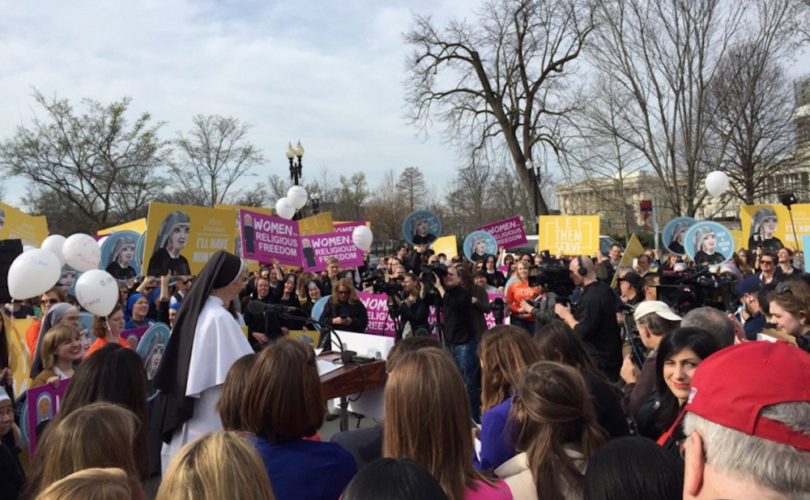 WASHINGTON, D.C., March 23, 2016 (LifeSiteNews) — Pro-abortion groups may claim to represent “women's rights,” but today it was women opposed to the Obama administration's abortifacient, sterilization, and contraceptive mandate who said they spoke for the nuns and other women targeted by the federal government.

A rally in front of the Supreme Court today, organized by Women Speak for Themselves, drew hundreds of supporters for the Little Sisters of the Poor and other organizations.

“All we are asking for is the same treatment under the law as Pepsi and Chevron,” The Catholic Association's Ashley McGuire told the crowd.

McGuire's reference was to the mandate's exemptions, provided to approximately one-third of Americans, including corporations like Pepsi and ExxonMobil — but not to Catholic groups like Priests for Life, EWTN, and Little Sisters of the Poor, or other religious and pro-life groups like March for Life and Oklahoma Wesleyan University.

Watch the Little Sisters of the Poor deliver a statement outside the Supreme Court Wednesday morning:

The rally also hosted commentary from attorneys and plaintiffs fighting the mandate shortly after the Supreme Court hearing ended at 11:30 a.m. Eastern.

Moments after the hearing ended, Sister Loraine Marie Clare told the hundreds of supporters that “we find ourselves in a situation where the government is requiring us to include services in our religious health care plan that violate some of our deepest held religious beliefs as Little Sisters.”

Picking & choosing who gets to live out their faith does not comply with federal law – @sarahtorre #LetThemServe pic.twitter.com/tLrSDClcof

“It is a privilege for us to care for the most vulnerable members of our society; serving them, comforting them, being a loving and healing presence in their lives; just being a 'Little Sister to them' is our joy.  All we ask, is that we can continue to do this work. After hearing the argument today, we are hopeful for a positive outcome.  We will continue to trust God because–as our Mother Foundress St. Jeanne Jugan said: 'God will help us, the work is His.'”

Women Speak for Themselves has posted updates on the rally, including quotes and photos, to their Facebook page.

Mother Assumpta, superior of the Dominicans, Mary Mother of the Eucharist in Ann Arbor, Michigan, told rally-goers, “Filling out a piece of paper is not the issue. What concerns the Little Sisters is that the piece of paper demanded by the government triggers the provision of contraceptives and abortifacients to the women in the Little Sisters health plans, making the Little Sisters a vital part of the chain and materially complicit in the provision of services that they find morally objectionable. Complicity with sin is sin in itself. And the government cannot make this otherwise.”

Gloria Purvis of EWTN told said that “the mandate claims it offered the Sisters an opt out but it is really an opt in!”

Elise Italiano of The Catholic University of America said, “We are here, today, before the Supreme Court, because this mandate renders us unable to fulfill our mission, and compromises our credibility with the students entrusted to our care. How can we teach our students about the nature of human dignity and human sexuality as understood by our faith and then directly violate that teaching in our actions?” ‪

Co-plaintiff Alveda King of Priests for Life, said shortly before praying at the rally, “I'm exercising my religious freedom to stand in front of the Supreme Court and so are you!”

Dr. Marguerite Duane, who testified before the Institute of Medicine committee on the mandate, told attendees that “When I first began to speak, the committee listened with interest as I highlighted my expertise in the area of preventive health services, as a medical director, Adjunct Associate Professor at Georgetown University and author of chapters on preventive health.”

“As soon as it became clear that I was speaking against the HHS Mandate,” said Duane, “the committee seemingly ignored everything else I would say, as it was clear they had their own agenda.”

In a statement released just after the hearing, Alliance Defending Freedom (ADF) Senior Counsel Gregory Baylor said, “The government has many other ways to make sure women are able to obtain these drugs, but it has chosen the unlawful and unnecessary path of forcing people of faith to participate in acts that violate their deepest convictions.”

“Thousands of businesses and organizations, like Pepsi and Exxon, are already exempt from the administration’s abortion-pill mandate for reasons that have nothing to do with religion, yet the government is targeting people of faith—forcing them to comply with an unjust edict that tears at the very heart of who they are. We hope the justices will agree that this injustice shouldn’t stand.”

ADF is representing multiple clients to the U.S. Supreme Court. One of those clients, Oklahoma Wesleyan University, was represented by its president, Dr. Everett Piper, who told the crowd of supporters that “our commitment to affecting culture and actively standing up for what we believe and know to be right has now led us to the Supreme Court, asking for our basic constitutional freedom to be who we have always been.”

“If the government had wanted to, they could have set up plans on the state and federal health exchanges that would allow women to access these particular drugs and devices. Instead, the Obama administration has exempted billion-dollar corporations for reasons that have nothing to do with religion and is targeting Christian institutions like us, under threat of millions of dollars in crippling fines, to carry life-ending drugs like the week-after pill in our employee health insurance plans—against the beliefs and mission of our school and against the beliefs of the Oklahoma Wesleyan women who are eligible for these plans.”

Millie Johnson, a faculty member at Geneva College — another ADF client — said, “As I give all the glory and honor to my Lord and Savior Jesus Christ, I am most of all blessed and honored to stand before you on today to represent Geneva College in this fight for the sanctity of life.”

“Geneva College simply wants to continue to operate according to the faith it was founded on and the faith that still inspires the college to serve the community and the world today. Geneva College is committed to preserving freedom, and we live according to our God-ordained and constitutional right to not contribute to the mass genocide that is abortion.”

“The government has many ways to deliver its services without using the Little Sisters of the Poor—alternatives that it says are as easy to use as shopping on Amazon or Kayak, and which it has already extended to millions of Americans” said Mark Rienzi, senior counsel at the Becket Fund for Religious Liberty and lead Becket attorney for the Little Sisters of the Poor. “Yet the government admitted today that it is forcing the Sisters to violate their sincerely held beliefs. That’s wrong and unnecessary. As Paul Clement said in concluded oral argument today, the Little Sisters are happy to be conscientious objectors, but they can’t agree to be conscientious collaborators.”