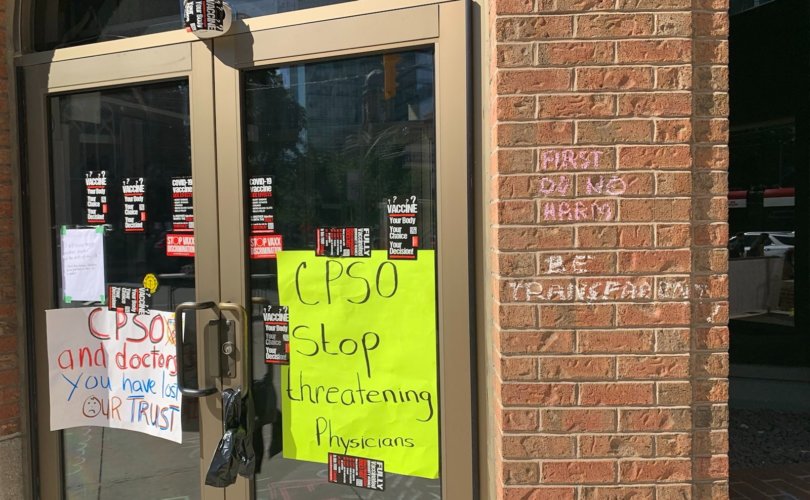 TORONTO (LifeSiteNews) — Hundreds of medical freedom advocates showed up to the College of Physicians and Surgeons of Ontario building in Toronto last Friday to protest COVID-related coercion.

“On Friday, June 24th 2022, Canadians protested against provincial Colleges of Surgeons and Physicians across the country. These colleges have abused their authority, blocked life saving treatment of patients with covid, muzzled doctors, persecuted doctors who refuse to be muzzled, and [have played a major role] in the criminal coercion of the entire population into the deadliest injection campaign in history,” wrote outspoken COVID vaccine critic and experienced Ontario ER physician Dr. Mark Trozzi on his website Monday.

Photos from the Toronto rally, which took place outside the College of Physicians and Surgeons of Ontario (CPSO) building in the city’s downtown core, show dozens of Canadians gathered with pro-freedom signs and messages scrawled in chalk on the sidewalk.

“Autonomy and privacy are the bedrock of freedom,” read one chalk-written message.

According to Trozzi, “Hundreds of truth and freedom lovers attended” the rally, which featured prominent speakers such as Dr. Mary O’Connor, Dr. Emad Guirguis, and Dr. Chrystal Luchkiw.

As extensively reported by LifeSiteNews, Ontario doctors who have chosen to speak out against the mainstream COVID narrative — particularly those who have mentioned the experimental nature of the so-called vaccines and the thousands of reports of injury and death associated with the shots — have faced harsh and even career-ending sanctions by the CPSO.

O’Connor and Luchkiw have had their medical licenses suspended by the CPSO for questioning the often-injurious shots and for granting medical exemptions to patients who had been mandated the jabs.

In O’Connor’s case, the CPSO specifically took issue with the fact that she has referred to the injections as “gene therapy,” even though top experts in the field – including mRNA vaccine pioneer Dr. Robert Malone and Bayer pharmaceutical executive Stefan Oelrich – have publicly confirmed that the term “gene therapy” is indeed accurate.

Regardless of the “safe and effective” marketing deployed by government health agencies, politicians, and the mainstream media, it remains a fact that the jabs are in the clinical trial phase until 2023.

Moreover, the COVID-19 injections approved for emergency use in Canada have been associated with severe side effects such as blood clots, rashes, miscarriages, and even heart attacks in young, healthy men.