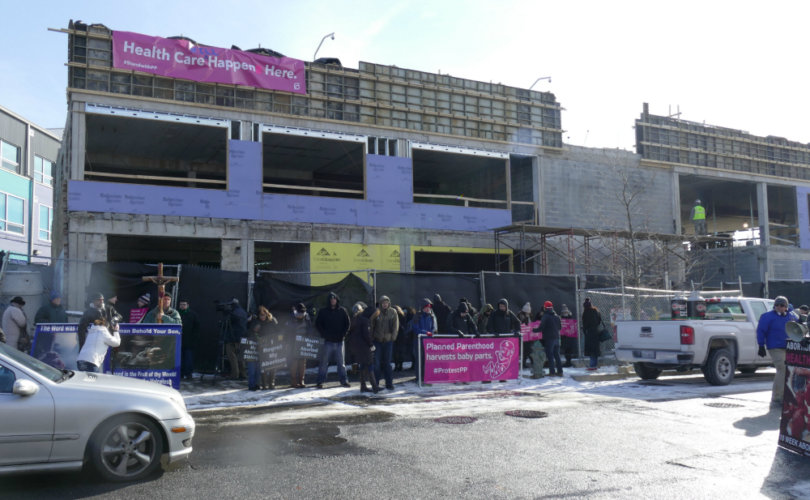 WASHINGTON, DC, January 22, 2016 (LifeSiteNews) – Pro-lifers must be willing to pray, protest, be politically active, and ultimately to lay down their lives in order to end America’s abortion holocaust, said several speakers at a rally Thursday at the site of a future Planned Parenthood abortion facility.

But the abortion giant has since spent an estimated $6 million to buy and renovate a property on 1225 4th Street in the city’s northeast quadrant. The new abortion center is scheduled to open in May.

“On the day that this death mill is going to open, will there be anybody here? Will somebody lay their body in front of the door? Will you handcuff yourself to construction equipment?” Dr. Monica Migliorino Miller, director of Citizens for a Pro-Life Society asked a crowd of over 300 on a chilly Thursday morning. “Think about what you are willing to really give up to make sure that not another single unborn child will die.”

Fr. Frank Pavone, director of Priests for Life, urged pro-lifers to get politically active. “We need to elect public servants who know the difference between serving the public and killing the public,” he said. “And if somebody doesn’t know the difference between those two things, they don’t belong in public office. And if they’re in public office, they need to be kicked out.”

“And if they’re running for public office and they don’t know the difference between serving and killing, well then, they need to be defeated.”

Pavone emphasized that prayer and protest “necessarily go together” and that while “we know politics is not our salvation” Christians “need to be involved in the political arena.” Jesus “put us here and and he expects us to use that privilege of citizenship to make a change.”

David Daleiden of the Center for Medical Progress also spoke at the rally. Beginning in the summer of 2015, his group released a number of undercover videos that exposed Planned Parenthood personnel selling baby body parts, videos that arguably prompted Congress to pass a bill defunding Planned Parenthood, which President Barack Obama vetoed.

Those videos galvanized Americans to get active, noted Bryan Kemper, founder of Stand True Pro-Life Outreach and youth director for Priests for Life. Kemper related how a pastor accosted him and said, “You’re that pro-life guy? I saw those videos about Planned Parenthood and God just broke my heart that I have been apathetic, and my church has ignored the abortion holocaust.”

“Pro-life is not a noun. It must be a verb, it must be an action,” exhorted Kemper.

“I do believe that if this generation will stand up, that we can be the generation that abolishes abortion, because abortion remains legal by the permission of Christians who do nothing about it.”

“We all have to fight Planned Parenthood,” Sedlak said, and “we have to use all our weapons and Our Blessed Mother is a great weapon.”

When in front of Planned Parenthood abortion facilities, pro-life advocates should display an image of Our Lady of Guadalupe, whom Catholics honour as the patroness of the pro-life movement, he said.

One abortion worker told pro-lifers that “she was quitting her job. And the people said why, and she said, ‘Because that woman is here,’ and she pointed to a picture of Our Lady of Guadalupe,” Sedlak related.

“She said, ‘I used to work at another Planned Parenthood facility, and that woman showed up, and I couldn’t take it, so I asked for a transfer. And now she’s here, so I’m quitting.’”

“Mary will close down Planned Parenthood,” he said. “We’re going to see it happen. It’s starting, it’s going on right now, it will happen in our lifetime. We encourage you to just keep fighting. We’re winning.”

Joan Andrews Bell spoke about the Apostolate of Christ Crucified which she has started and that she described as “a rescue movement apostolate, we live together, pray together, and go to jail for the babies.”

Andrews Bell for many years was involved in non-violent rescues, in which people block the doors of abortion facilities, and spent two-and-a-half years in nearly continuous solitary confinement in a maximum security prison in the early 90s, because she also refused to cooperate with a penal system that protects the abortion industry.

Andrews Bell told the crowd about Canadian pro-life prisoners of conscience Linda Gibbons and Mary Wagner. (Gibbons was released from a Toronto-area jail the morning of the rally, after 141 days in custody following her September 2 arrest outside a Morgentaler abortion center. Wagner, who was arrested on December 12, remains in jail pending her March 12 trial.)

Andrews Bell foresees a resurgence of the rescue movement that peaked in the late 80s and early 90s. “I think God’s grace is going to touch the hearts of every single person who loves Him and who is pro-life…I believe they will gain the heart of Christ in such a deep and powerful way, they will rescue again,” she told LifeSiteNews.

Migliorino Miller pointed out that “abortion represents a grave spiritual crisis and I believe that the only way to ultimately overcome this horrific spiritual crisis is by what I call radical acts of love…To stop abortion, to be involved with this injustice, to want to see it end, you can’t live a normal life anymore. All that’s gone.”

“Are we willing to really allow ourselves to be spent…so that others may live?” questioned Migliorino Miller, who teaches theology at Madonna University in Michigan. “And that means, are we willing to allow our property to be taken, our jobs to be lost, our reputations to be lost?”

“We are at a critical moment,” rally organizer Mahoney told LifeSiteNews. “We are seeing for the first time in history America self-identify as pro-life. We’re seeing for the first time in history a bill go to the desk of the president defunding Planned Parenthood, we’re seeing this incredible movement the select committee in the House investigating Planned Parenthood, we’re seeing abortions down to near historic lows.”

“Americans are moving away from abortion on demand and the violence of abortion,” he added. “We as a country cannot consider ourselves a great nation if we take the lives of our innocent children and diminish women.”