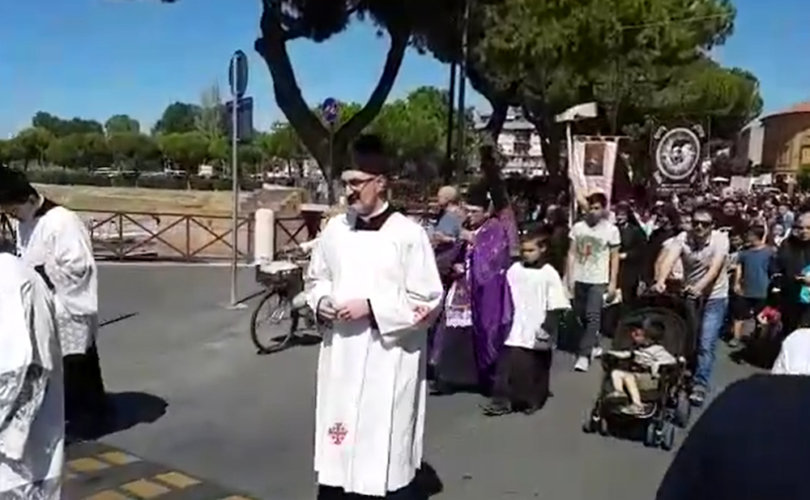 RIMINI, Italy, July 31, 2017 (LifeSiteNews) — An estimated 400 Italians joined a rosary procession to do public penance in reparation for the “public scandal” of a seaside town’s second annual homosexual “Pride” celebrations.

The parade, described as “sombre,” took place as announced in Rimini, Italy on Saturday, July 29. It was organized by the “Comitato Beata Giovanna Scopelli” (Blessed Giovanna Scopelli Committee), which first organized a public penance for “Pride” celebrations in Reggio Emilia on June 3. Since then, similar rosary processions have taken place in several Italian cities, including Milan.

In a jubilant press release, the Committee reported that their procession in Rimini was a “great triumph from every point of view.” They had expected only 100 marchers, had prepared booklets for 150 and welcomed 400. The procession had received the blessing and encouragement of Archbishop Emeritus Luigi Negri of Ferrara and American Cardinal Raymond Burke.

Italian news website “Rimini 2.0” reported that the Blessed Giovanna Scopelli Committee had received a message from Cardinal Burke on Friday afternoon. He had written: “Dearly beloved, I affectionately agree to your prayer request, thanking you for the witness of faith that distinguishes you. With assurance that I will remember you in prayer, in entrusting you to the Sacred Heart of Jesus and the Immaculate Heart of Mary, I heartily give you my blessing.”

Archbishop Negri wrote to the organizers, “I am with you in affection and gratitude. Your testimony to the truth is becoming a service to the common good of the people.”

These episcopal blessings were in contrast to the distancing efforts of local clergy, as previously reported by LifeSiteNews, both in Rimini and earlier in Reggio Emilia.

“The churches are open to all,” the Committee noted, “to [Emma] Bonino, to other ‘religions,’ to many homosexuals publicly describing themselves as such and proud of their homosexuality, [proud] to continue in homosexual ideology, but not to Catholics who want to pray and show publicly their faith.”

The Committee, which has no hierarchy but claims more than 2,000 members, has pledged to continue public reparations. On Facebook, it rejected vigorously claims by Italian media that there were only about 200 marchers.