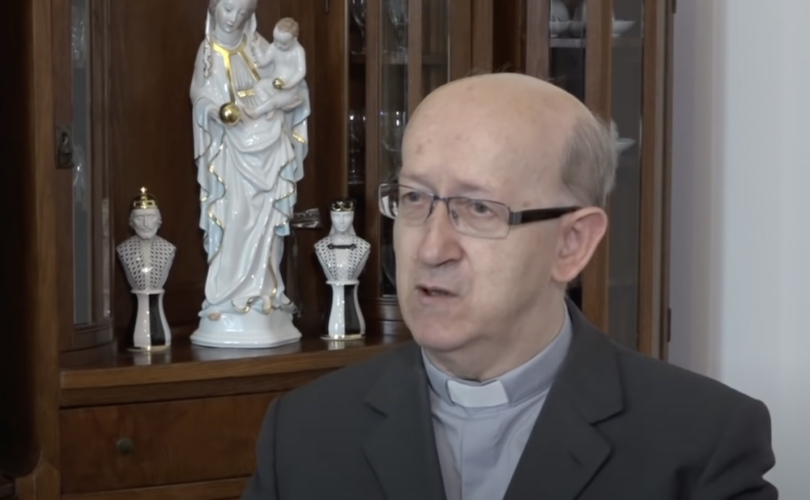 VESZPRÉM, Hungary (LifeSiteNews) – A Hungarian prelate recently sounded off against the rise of LGBT ideology, Islam, and anti-Christian sentiment in Europe and the influence of Freemasonry over leaders of the European Union.

In an interview last month with conservative Hungarian newspaper Magyar Jelen, Archbishop Emeritus Gyula Márfi of Veszprém warned of a multi-pronged assault against European Christianity from left-wing forces within the E.U.

“One of the most striking signs of the European Union’s anti-Christianity,” he said, “is that its constitution did not commemorate Europe’s Christian roots,” a point similarly emphasized by Pope St. John Paul II and Pope Benedict XVI.

“They write about Greco-Roman traditions and enlightenment, but not about Christianity,” Archbishop Márfi said, referring to the E.U. Constitution. “Yet ancient culture and art have survived precisely because of Christians: the writings of Virgil, Tacitus, Homer, and others have been copied by monks deep in their cells.”

He also cited the vicious anti-clericalism directed at Pope Benedict XVI, who insisted on the importance of Christianity to European civilization.

The archbishop additionally lamented the erasure of Christmas in the public square, noting the growing trend of replacing the word “Christmas” with “holidays.”

He recalled how the city of Brussels, the capital of the E.U., declined to put up a Christmas tree in 2012 for fear of offending its Muslim population.

Archbishop Márfi identified Freemasonry, a longtime enemy of the Catholic Church, as a principal group working to secularize Europe.

“The aim of the Freemasons is to ‘rid’ Europe of Christianity,” he said. “To achieve this, they are willing to use all means, taking advantage of their lobbying force to infiltrate the leaders of the Union.”

Former French president Valéry Giscard d’Estaing, who presided over the drafting of the E.U. Constitution, was a Freemason.

READ: Everything you need to know about Freemasonry’s core teachings

The retired archbishop also pointed to the mass migration of Muslims as a chief means of weakening Europe’s Christian culture.

“In my opinion, Muslims are also being called in to get Christ and Christianity out of Europe,” he told Magyar Jelen.

“Today, Freemasons and Muslims are coming together to make Christianity disappear from Europe,” he observed. “It was practically the same as it was in the age of the Savior, when the Scribes and Pharisees worked with their deadly enemy, Pontius Pilate, to get Jesus out of the way.”

“In a multicultural, mixed society,” he continued, “the individual loses his identity, sense of identity, culture, faith, language, practically everything,” making people easier to manipulate for powerful corporations “who want to turn the whole Earth into a huge collective farm, where there are no ethnic, national and religious identities, only obedient workers and consumers manufactured according to standards.”

But European liberals “will ultimately ruin themselves” by embracing large-scale Muslim migration, he said, as “Islam will never accept their liberal principles.”

Archbishop Márfi has long been an outspoken critic of left-wing immigration policies, putting him at odds with Pope Francis, who has made embracing unfettered migration a central theme of his pontificate.

“The Holy Father asked every parish to accept a refugee Syrian family. Well, many parishes cannot sustain themselves without outside help,” the Hungarian prelate remarked in 2015.

“The leaders of the Muslim masses can clearly see that the situation is ripe to occupy the apostate continent,” he starkly warned at the time.

In his interview with Magyar Jelen, Archbishop Márfi alluded to Muslims’ long history of violence and terrorism against Christian Europe, and particularly Hungary, which suffered widespread devastation at the hands of the Turks during the Ottoman wars.

“They have been here in Hungary for 150 years, we know how much destruction they have caused,” he said of Muslims. “We Hungarians still carry the memory of this in our genes to some extent.”

LGBT movement an even ‘greater threat’

Despite the grave danger that Islam poses to European Christianity, Archbishop Márfi named LGBT ideology an even “greater threat” and strongly condemned the embrace of homosexuality across much of Europe.

Legalization of same-sex “marriage” is a “deadly sin,” affirmed the prelate. “I regret that it has already happened in most European countries.”

He further stressed the protection of children’s rights from the radical LGBT movement. “Incidentally, with regard to the LGBTQ issue, we must not forget the rights of the children,” he insisted.

Children “have the right to a mother and a father,” he said, reiterating Catholic teaching. “They should not be allowed to be insecure about their gender identity and orientation through the media, advertising, and education,” he added.

Hungary in 2021 enacted a ban on the promotion of homosexuality and gender confusion of minors in education and the media, prompting legal action from the E.U., which previously sued the country over its strict immigration policies.

The archbishop additionally touched on the widespread embrace of LGBT ideology among the Catholic hierarchy in Germany, calling the situation “catastrophic.”

“I don’t understand that either, this can’t be justified,” he said. “The situation in the German Church is really catastrophic.”

“A significant portion of German Catholic priests now bless same-sex ‘marriage’ as well as cohabitation,” he noted. “This is no longer Christianity, it is already anti-Christ.”

“We need to cling very strongly to our faith,” Archbishop Márfi declared.

The prelate’s comments resemble those of Cardinal Gerhard Müller in a recent interview with LifeSiteNews, in which he described same-sex “blessings” as “absolute heresy and schism.”

READ: Cardinal Müller: Transgender ideology is ‘self-mutilation,’ promoting it is a ‘serious sin’