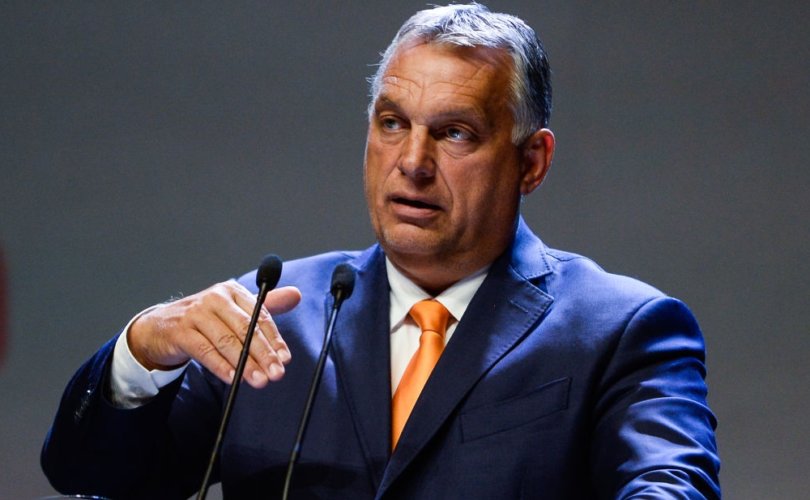 BUDAPEST, Hungary (LifeSiteNews) – The Hungarian Prime Minister has hit back at U.S. President Joe Biden for his criticism of the European state as a “totalitarian regime” in a Fox News interview, telling the broadcaster that “it’s better even for the leftist liberal government in the United States” to stay out of Hungarian politics.

Fox News host Tucker Carlson spoke with Hungary’s Prime Minister Viktor Orbán in an August 6 meeting to discuss the growing disparity between the political conservatism of Hungary and the wider European community, and the influence of the U.S. on Hungarian politics

Carlson noted Biden’s open animosity towards Hungary, including his characterization of the country as a “totalitarian regime” which “embraces all the thugs in the world.”

Orbán explained that, upon learning of Biden’s disdainful portrayal of Hungary, the reactions of the citizens of the Central European nation were “not very polite” and wondered how Biden could make such a judgement.

Ultimately the prime minister chalked up the president’s words to bravado. He called Biden’s act “a fake” and declared that he and the nation of Hungary have a respect for American values and culture, if not the current Democrat administration.

Orbán noted that the American president, “somebody who does not speak our language, has a very limited knowledge of Hungary, even in the recent several decades of our life,” does not understand the country.

“By itself it’s a personal insult for all the Hungarians,” the prime minister added, “but because he is the President of United States, we have to be very modest, we have to be very respectful, and we have to [explain] a lot of things to clarify that what he is doing is rather a fake.”

Orbán noted that Hungary, like Poland, stands out among civilizations of the west as a conservative “success story,” bucking the liberal trend among the wealthiest of its European neighbors.

The prime minister, a member of the Calvinist Hungarian Reformed Church, highlighted that his country’s flourishment is “a real challenge for the liberal thinkers.”

“What is going on in central Europe … is building up a society which is very successful economically, politically, culturally,” he explained, adding that the country’s adoption of family friendly policies has helped bolster their successes.

“The fundamentals of this success,” he said, “are totally different than what is wished and run and created by the many other western countries.”

Those opposed to Orbán’s conservative ideals “cannot accept that inside the western civilization there is a conservative national alternative which is more successful at everyday life … than the liberal ones,” he added. “That’s the reason why they criticize us. They are fighting for themselves.”

“We are an example that somebody, or a country, which is based on traditional values, on national identity, based on the tradition of Christianity, could be successful or sometimes even more successful than the leftist liberal government.”

Biden’s hostility to Hungary notwithstanding, Orbán spoke highly of the American regime and lauded the “American democracy, American culture.” Accordingly, “we would not like to destroy our relationship because the bilateral relationship with the Americans is basically very good,” Orbán said.

In fact, Orbán delighted in a range of happy relations established between America and Hungary, especially under the leadership of former President Donald Trump, with whom Orbán described having “much support … not just personally, but also politically.” The prime minster said that the two countries have been “cooperating well on the on the field of defense as NATO allies,” and that “economic cooperation is excellent.”

This includes substantial American investment in the Hungarian economy and positive trade relations.

“Everything is fine except the politics when the liberals are in government in Washington; that’s the problem,” Orbán lamented.

“We have to manage that because the American-Hungarian good relationship is of value, even if the Americans don’t perceive it today as [they did] previously … We have to save what we can save out of it.”

Orbán has faced intense scrutiny from the leaders of many states within the European Union (EU), a supranational government of which Hungary is itself a member. The President of the European Commission, which acts as the executive branch of the EU, declared in July that Hungary breached EU law by introducing legislation designed to tackle pedophilia, including a ban on pro-LGBT materials in schools.

The EU subsequently passed a resolution denouncing the Hungarian law, stating that “LGBTIQ rights are human rights” and formally requesting the EU to use its powers to strangle Hungary’s budget allocation, with the hope of coercing the nation to submit to the EU.

The Hungarian premier responded by declaring that he would not be bullied by the EU, adding that in his country, “Brussels bureaucrats have no business at all.”

“No matter what they do we will not let LGBTQ activists among our children,” he declared.