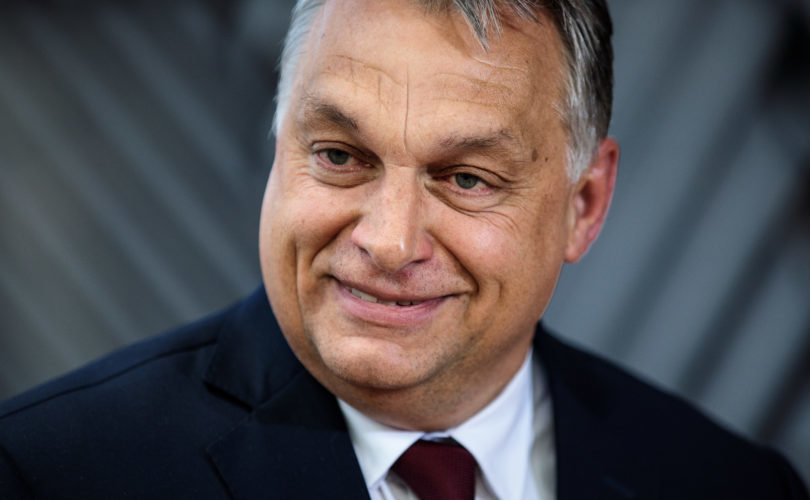 BUDAPEST, Hungary, June 17, 2021 (LifeSiteNews) — Prime Minister Viktor Orban promised to “protect our children” with the recently passed legislation which includes forbidding the showing of pornographic material or content portraying homosexuality or transgenderism to minors under the age of 18.

“The liberal steamrollers are once again at work against Hungary,” he said. “They’re now setting off alarm bells across Europe over Hungary’s new laws to severely punish pedophiles and protect our children.”

“Education in schools must not be in conflict with the will of parents,” he continued. “It must at most be supplementary, its form and content must be clearly defined, and it must be subject to parental consent.”

“Parents also rightly expect that on platforms used by our children, pornography, sexuality for its own sake, homosexuality and gender reassignment programs should not be available,” Orban stated. “These restrictions must also be defined with surgical precision.”

At the same time, he explained that these laws do not apply to those over 18, saying “in our view, a free adult should not have to give an account of his life in front of any secular authority — only before God when the time comes.”

He argued that the ongoing left-wing campaign against Hungary proves that “the left is the enemy of freedom.” “Instead of freedom of speech,” he said, “they want political correctness as defined by them, and hegemony of opinion instead of a pluralism of ideas.”

He affirmed that Hungary aims to preserve freedom. “The reasons for this are rooted in our cultural traditions, in Christian freedom, in the struggle for national freedom and in a deep contempt for communism and communist tyranny.”

“Hungarian freedom means not only political freedom, freedom of choice, freedom of speech, freedom of assembly and association, but also the right to defend our families and educate our children as we see fit,” Orban boldly stated. “Our law is a worthy continuation of the European tradition of freedom.”