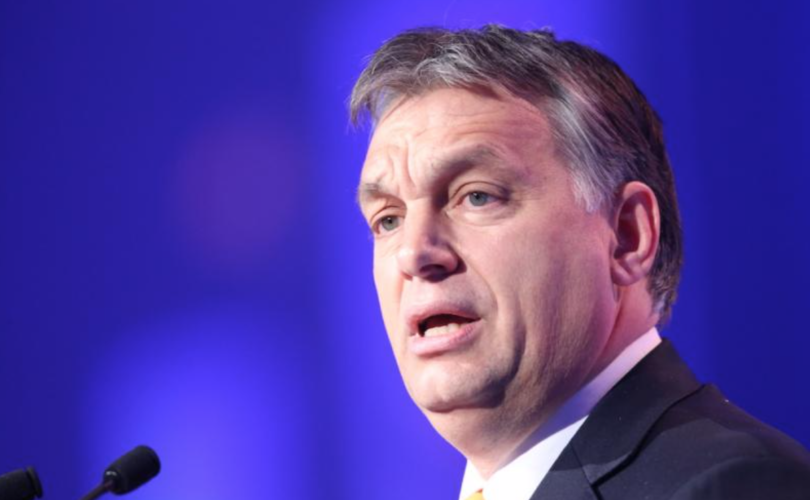 BUDAPEST, Hungary, October 31, 2018 (LifeSiteNews) ― The Hungarian government wants to reverse its own demographic decline the old fashioned way: by making it easier for the nation’s own citizens to have bigger families.

To this end, Prime Minister Victor Orbán’s government is launching a formal consultation with Hungarians to elicit their ideas on how the state can give more effective support to families. Survey forms will be sent to an estimated 8 million households over the next month. Parliamentary State Secretary Csaba Dömötör says that subjects to be discussed will include support for young married couples, ways to encourage couples to have more children, and flexible employment hours for working mothers.

According to the pro-Orbán “About Hungary” website, Hungary’s demographic policy – which eschews mass migration in favour of homegrown babies – has already had a strengthening effect on the nation’s families:

“About Hungary” also reported that since Orbán’s election, 83,000 Hungarian families have received subsidies for buying homes, saved on their taxes, and discovered 50 percent more daycare places.

Hungarian university student Alexander Masir, 22, told LifeSiteNews that Orbán’s policies have indeed had an effect on the nation.

“I think his reforms are a moderate success,” he said. “The birth rate is growing, and his tax reform means that families with four or more children pay virtually no income tax or other contributions.”

Masir, who is studying at Glasgow University, says that the policies have also helped his own family.

“My family, although smaller, also benefits from recent legislation, receiving support for my little brother mainly.”

Orbán’s policies are at odds with those of the European Union, which emphasize porous borders and mass migration instead of national identities. In July Orbán gave a speech in which he offered five politically incorrect tenets for “building up” Central European countries, beginning with a defense of European Christian cultures and the traditional family.

“The first is that every European country has the right to defend its Christian culture, and the right to reject the ideology of multiculturalism,” he said.

“And the fifth tenet is that every European country has the right to insist on the principle of one nation, one vote on the most important issues, and that this right must not be denied in the European Union. In other words, we Central Europeans claim that there is life beyond globalism, which is not the only path. Central Europe’s path is the path of an alliance of free nations,” Orbán concluded.

“Earlier governments, notably before 2010, emphasised individual autonomy instead of the reasonable duty of contributing to the community that raised us,” the Kecskemét native said. “There was nothing at all said about the tens of thousands of young people moving abroad to work and villages and the countryside being depopulated.”

“Alongside the important reforms, the most recent major one being CSOK, a benefit scheme for building or acquiring a first home for new families, the youth are invited to stay in the country, to settle down, and to have large, stable families,” he continued. “It's being made clear that the workplace is only one of the many options available to women. However, there was also a response to the more Western-style urban model certain families are following, and so the government also started building many new nurseries.”

Meanwhile, Masir believes that Orbán has not yet turned the demographic tide.

“I’d say the program gestures in the right direction,” the student said. “However, it so far has failed to turn around the demographic loss [although] there is an improvement in that field as well. They do a lot for large families, both in poverty and the middle class; however, there is less of a success with getting young professionals to have their first or second child.”

If consulted on how to make Hungary even more family friendly, Masir would suggest that the government work more closely with the Catholic Church.

“There is still an obvious link that's being neglected between faith and families,” he said. “The largest and healthiest families in my classes were all practicing Christians, and most of those Catholic; I would advise him to integrate the government's action with that of the Church.”