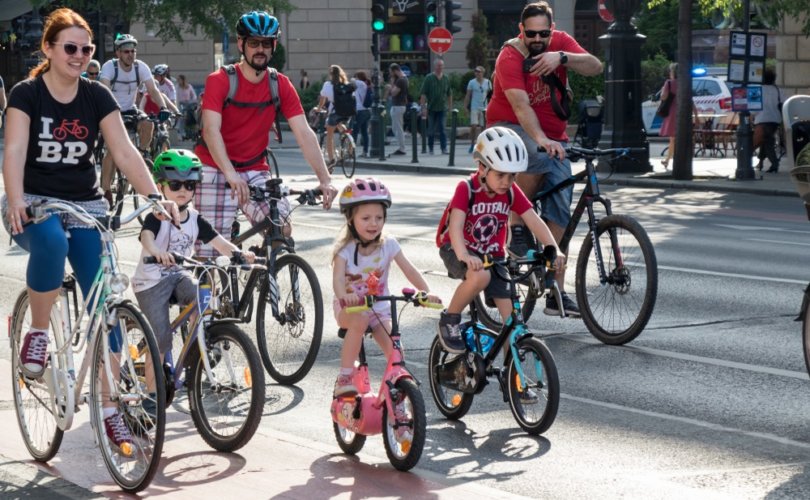 ROME, Italy, June 1, 2018 (LifeSiteNews) – Hungary's ever increasing support for families by the government is creating an environment where marriages and families are flourishing and abortion numbers are dropping, one of the country’s ministers advised a recent international conference on life and family.

“A precondition of the medium and long-term social development and the sustainability of Hungary is a lasting turn in demographic trends,” Katalin Novàk, Hungarian Minister of State for the Family, Youth and International Affairs, said.

“The objective can be achieved with a stable, complex, targeted and flexible family policy that is capable of adapting to changing needs and conditions,” she added.

Novàk’s office is responsible for the management of the central European country’s family policy. Titled “Hungarian Family Policy in the Spirit of Humanae Vitae and Veritatis Splendor,” Novak’s address was delivered to a May 21 conference in Rome on the topic of “Human Life, the Family, and the Splendor of Truth: Gifts of God.”

The conference was convened by the John Paul II Academy for Human Life and the Family (JAHLF) and concerned the key Church encyclicals Humanae Vitae and Veritatis Splendor on their 50th and 25 anniversaries, respectively.

Christine de Marcellus Vollmer read Novàk’s remarks for the conference. Vollmer is president of Provive and a former member of the Pontifical Academy for Life, and has been a member as well of the Pontifical Council for the Family.

“The Fundamental Law (Hungary’s constitution) attaches special importance to the family, protects the institution of marriage, and states that the foundation of family lies in marriage and in parent-child relationship. It declares that Hungary shall encourage the commitment to have children,” Novàk said.

Hungary’s approach includes assisting families with reconciling of work and family obligations. Considering this “of key importance,” current Hungarian family policy has comprehensive programs to offer this help to families.

Statistics on demographic and economic developments in Hungary between 2010 and 2017 indicate an increase in the number of live births and the overall fertility rate, according to Novàk’s report, and the number of abortions and divorces has decreased, while marriages have increased.

Novàk’s address was one of several offered at the inaugural official meeting of the JPII Academy for Life.

The pope had not invited back many former Academy members appointed by Pope St. John Paul II, removed the requirement for members to sign a declaration upholding the Church’s pro-life teachings, and in the process he also appointed abortion supporters and implemented a different mandate that included immigration and the environment.

Novàk’s full address is reprinted below:

The Fundamental Law (Hungary’s constitution) attaches special importance to the family, protects the institution of marriage, and states that the foundation of family lies in marriage and in parent-child relationship. It declares that Hungary shall encourage the commitment to have children.

A precondition of the medium and long-term social development and the sustainability of Hungary is a lasting turn in demographic trends. The objective can be achieved with a stable, complex, targeted and flexible family policy that is capable of adapting to changing needs and conditions.

Parents and parents-to-be need to have long-term stability and reliable financial situation. In this respect, employment and the easy reconciliation of work and family obligations are of key importance. Therefore, we make attempts to help parents harmonise their career and child raising as much as we can.

The present Hungarian family policy has complex toolkits to offer such help to families. A prioritised objective is to implement a lasting turn in demographic trends; for this reason, efforts are made to give all help to ensure that all children wished for are actually born.

In Hungary, the State Secretary's Office for Family and Youth Affairs of the Ministry of Human Capacities is responsible for the professional control of family policy. After the general elections of 2014, in the new governmental period family affairs were separated from social affairs, as the connection of the two areas used to convey the message that having children equals poverty.

In Hungary, families are offered outstanding support: Hungary spends 4.8 % of its GDP for such purposes comparing to the OECD average of 2.55% (2011, Source: OECD Family Database).

The forms of family support are either universal (given on the basis of a subjective right) or conditional upon employment before the child's birth.

Child home care fee (GYED) extra package, introduced in 2014, offers significant support and marked a conceptual change. Its objective is to ensure that having children does not exclude individuals from the labour market and that mothers with children will not be forced to decide if they want to be at home with their children or to take up employment.

In 2017 nearly 90,000 parents were entilted to GYED Extra (of whom 39,491 parents received the benefit after more than one child and 847 parents benefited of the student's GYED).

An emblematic tool of Hungary's family support system is a generous family tax benefit, offered gradually to more and more citizens in recent years. However, the biggest budgetary item is the family allowance, offered on the basis of a subjective right and for each child;

Hungary allocates approximately 1.1% of its GDP to this purpose. 1 January 2011, parents expecting their first child are eligible for the benefit from the date onwards when the foetus is 91 days old.

The financial situation of families has been considerably improved with the decrease of overheads (costs of gas, district heating, electricity, water and water treatment, chimney sweeping and waste collection), introduced gradually

Between 2010 and 2017, the net average earnings of the Hungarian families has increased by 63.8% thanks to the family tax reduction. A parent with one child earns more by 13% (26,000 HUF) on average compared to an adult without any minor.

Housing is promoted with a non-repayable grant (housing allowance for families), loans with subsidized interest, and state-supported housing savings programmes.

As of 1st July 2015, social housing subsidy is replaced by family home-start subsidy (Hungarian abbreviation: CSOK) which is now offered to a wider range of beneficiaries to promote the achievement of housing-related objectives of families who bring up children.

As of 1 January 2016 families who are currently raising three or more children or who undertake to raise at least three children in the future (including the children they already have) may uniformly receive a one-off in-cash support of 32.260 Euros when building or buying a new estate. In addition, these families are eligible to a 32.260 Euro (HUF 10 million) reduced residential loan with a State interest-rate subsidy. From July 2015 to February 2018, nearly 70,000 families benefited from the family home allowance in the amount of 635.5 million EUR (HUF 197 bn), so a family received of approximately nine thousand Euros (HUF 2.8 million) in subsidies on average.

Tax allowance for first-wed new couples, a new tool to decrease the tax base, was introduced in 2015. This measure is intended to encourage young couples to marry: a newly-wed couple is eligible for a tax allowance of 16 Euros (HUF 5.000) per month provided that it is the first marriage of at least one of them. Until the end of 2015, 21.5 thousand couples could decrease their tax base by a total of 1.6 million Euros. A new benefit of the allowance introduced in 2017 is that couples continue to be eligible for this allowance for a maximum period of two years.

Parents have the opportunity to save money for their children with state support. The Baby Bond (currently managed by the Hungarian State Treasury) means that an amount – made up by the new start allowance of 137 Euros deposited by the state for each new born baby, by an amount optionally deposited by the parents and by an amount credited annually by the state each month for the first two payments (10% of their amount, but a maximum of 19.35 Euros) collected on the Start securities account opened at the Treasury – is deposited on a bond of a maturity of 19 years.

The government introduced the Elizabeth Programme of social vacation to ensure that those in need have opportunities for holidays. Every year, the major target groups include pensioners, large families, persons with disabilities, and children.

The government has extended the opportunity for free or subsidised child catering. From September 1, 2015, the number of children eligible for free meals during kindergarten and kindergarten has increased nearly threefold. In the 2016/17 academic year, 467,000 children received free meals.

Extension of the free supply of textbooks. As of the academic year 2016/2017, primary school pupils from their 1st until the 4th year have access to textbooks free of charge. At the same time, textbooks continue to be supplied free of charge to children in need (e.g. children living in large families or children with disabilities). As of the academic year 2017/2018 the Hungarian government extended this supply for each student in primary schools.

The period of degree holder’s child care fee is extended for university students until the child reaches the age of two.

The debt of families with three children having mortgage loans decrease by HUF 1 million and by further HUF 1 million if they have more children; the state will take over this amount from them.

The Woman 40 was introduced from 1st January 2011.Old age pension for women having a 40-year entitlement period without age restriction . The aim of this measure is to acknowledge multiple load on women as well as their engagement and give an opportunity for grandmothers to provide active help to their children primarily in looking after their grandchildren.