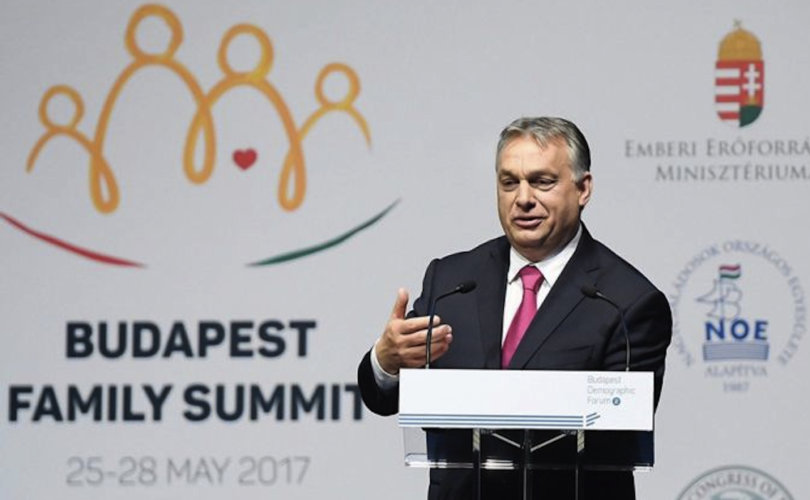 The World Congress of Families and Orban’s Hungarian Civic Alliance party are in agreement on several key social issues. WCF’s website describes Hungary as “an advocate for the natural family in Europe” and praises the country’s revised constitution, which defines marriage as between a man and a woman and proclaims that pre-born babies have rights.

The U.S. State Department under President Obama criticized Orban’s government on human rights grounds. The European parliament has called for sanctions against Hungary because, in the EU’s view, the Orban government discriminates against homosexuals.

The Southern Poverty Law Center calls the pro-family World Congress of Families a “hate group” because it opposes abortion and same-sex “marriage,” and also supported Russia’s 2013 law against homosexual propaganda given to children and minor teens.

Zoltan Kovacs, Orban’s spokesman, said the government is not anti-gay. “We are not demonizing anyone. We are putting our priority into families,” he said. “We believe that that families and having kids is the key to the crisis of demographic we face, and that is the declining population.”

Another area of contention is the outside liberal influence of wealthy globalists like George Soros. The 86-year-old multibillionaire has locked horns with Orban over the Central European University (CEU) he founded in 1989, which has been criticized as a funnel for anti-nationalist views.

Orban and Soros have a history, beginning in partnership and ending in acrimony. Orban started public life as a crusader against communism and attended Oxford on a Soros scholarship. Soros, who expatriated from Hungary, also funded Orban’s political organization, the Alliance for Young Democrats.

But Orban’s defense of conservative values has led to breaking ties with Soros, whom he now criticizes as a foreigner meddling in his country’s affairs.

Peter Torcsi of the Hungarian Research Center on Fundamental Rights defended the new laws, explaining that CEU leaders say they are unbiased academics but in fact are pursuing an anti-nationalist, anti-Orban agenda.

“Educational freedom is guaranteed in Hungary constitutionally,” Torcsi admitted, but quickly pointed out that “the problem is when a university or non-governmental organization starts acting as a political player.”

In April, the European Commission began an investigation into whether the new laws violate EU rules.

Agenda Europe stated, “There can be absolutely no doubt the Hungarian government is fully within its rights to regulate (universities). Every claim to the contrary is just outright ridiculous.”

Soros funds more than 60 NGOs in Hungary alone. He has sought to impose his pro-abortion, pro-gay agenda on not just Hungary but Europe, the United States, and nations across the globe.

Soros money has been behind the ‘orchestrated refugee crisis,’ revolutions around the world, the war on police, Black Lives Matter, Occupy Wall Street, globalism, and more.

In 2016, leaked documents from Soros-funded NGOs exposed his goal of eliminating pro-life laws around the world.