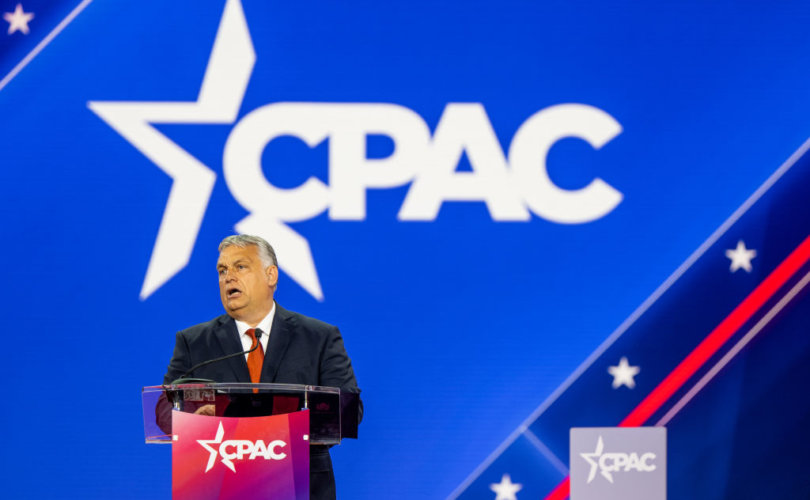 “Hungary shall protect the institution of marriage as the union of one man and one woman!” Orbán told the cheering crowd at CPAC Dallas on Thursday in a speech titled “How we fight.”

“Family ties shall be based on marriage or the relationship between parents and children. To sum up, the mother is a woman. The father is a man. And leave our kids alone. Full stop. End of discussion,” added the conservative leader, at which point the camera shows members of the crowd giving the Hungarian politician a standing ovation.

Orbán, who has won four consecutive elections in Hungary, also explained that when tackling the current issues in society, “Politics, my friend, is not enough. This war is a culture war. We have to revitalize our churches, our families, our universities and our community institutions.”

Describing how he has achieved political success, Orbán said one of the main factors is his government’s devotion “to law and order without compromise,” humorously adding that his government “decided we don’t need more genders, we need more rangers.”

“Less drag queens and more Chuck Norris,” emphasized the Hungarian, as the crowd responded with laughter.

Immediately after the speech, those on the political left took to social media to accuse the democratically-elected prime minister of being an “authoritarian” and a “dictator,” insisting that Americans who support him likewise deserve to be labeled that way.

“The Republican Party is a full blown authoritarian movement. The American people have taken notice of their extremism and are watching in disgust as the party fawns over Hungarian dictator Viktor Orbán and strips away our freedoms,” wrote left-wing media network MeidasTouch on the company’s Twitter page.

Despite the “authoritarian” accusation, critics of Orbán seem to be largely focused on his desire to keep immigration into the small country limited, or actions he has taken on social issues through the democratic process, such as his government’s decision to ban same-sex “couples” from adopting children or his country’s law preventing people from being allowed to legally “change” their gender.

In fact, one critic, Princeton University sociologist Kim Lane Scheppele, has admitted that “Budapest is one of the most beautiful cities on Earth. It feels so functional and free — you get there and think ‘this can’t possibly be a dictatorship,’” but claims that is not because Hungary is indeed a free country, but rather because Orbán engages in “21st-century repression” with which he is able to achieve his goals through “changes to the Constitution, rather than through violence.”

As noted by LifeSiteNews, while Orbán is often referred to as a “dictator” by many in the mainstream media, the truth remains that in the country’s most recent election, in April, Orbán soared to a supermajority in Parliament, capturing over two-thirds of the seats despite early polls predicting he would be ousted.