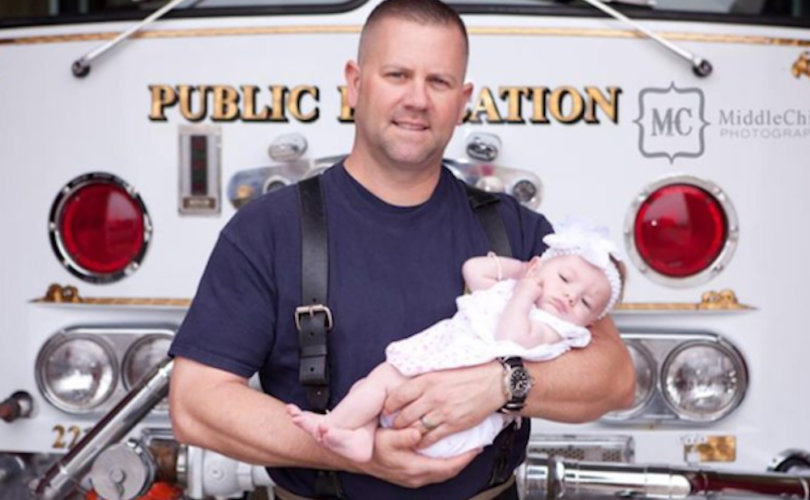 MYRTLE BEACH, South Carolina, February 20, 2017 (LifeSiteNews) – Marc and Rebecca Hadden had two sons but could only pray for the daughter they wanted because Rebecca could bear no more children. Then a baby literally fell into Marc’s lap as he helped a young mother give birth in his ambulance. Three days later, she was home with them for good.

“I will never forget that day. It was a day when a lot of things came full circle,” Marc Hadden told CNN. “We had prayed about it for so long. We wanted to adopt because we were unable to have more kids. We always dreamed of adopting a little girl.”

Hadden and his fellow firefighters were first on the scene one day in November 2011, answering a 911 call about a woman suffering extreme abdominal pains. They quickly determined the woman was in the final throes of childbirth.

In a manner of minutes, her baby emerged. “I was tasked with everything to do with Gracie,” Hadden told CBS News. “I helped her take her first breath.”

At the hospital, the mother told staff immediately she wanted to put the baby up for adoption. Somehow, Hadden, as he filled out paperwork, was among the first to hear this. He immediately responded, half jokingly, “Throw my name in the hat if this baby’s being put up for adoption.”

The nurse saw through his joking tone. “You need to go talk to this Mom.”

Hadden did just that. He explained his family situation, how he had two sons and how his wife could bear no more children. But they both wanted a daughter.

“We checked into adopting, but it was way too expensive,” Hadden told CBS.  “We prayed about it.”

The woman did not commit, but Hadden took a picture of the baby with his cellphone and sent it to his wife. She responded, “Can we keep her?”

At home, they decided to pursue the opportunity God had given them. Rebecca visited the woman the next day and explained more about the Hadden family.

“We had families, support, and a ton of stuff,” Hadden told CBS. “This mom didn’t. She had nothing. No family that was there.”

Again, the mother was noncommittal. However, as Rebecca was leaving the hospital, a doctor stopped her.

“She’s ready to go forward with the adoption,” he said.

Two days later, all the legal work was done without a hitch and the Haddens brought Gracie home for good.

“To see my wife's face light up,” Hadden recalled, “when we brought Gracie home. I can't even begin to tell you.”

Gracie is 5 now and evidently prized as much by brothers Will, 15, and Parker, 12, as by her parents. She plays soccer and is learning gymnastics.

“She contributed to all of our lives,” her father said.  “Every day I look forward to waking her up, getting her ready for school, then picking her up later on. She’s an awesome kid.”