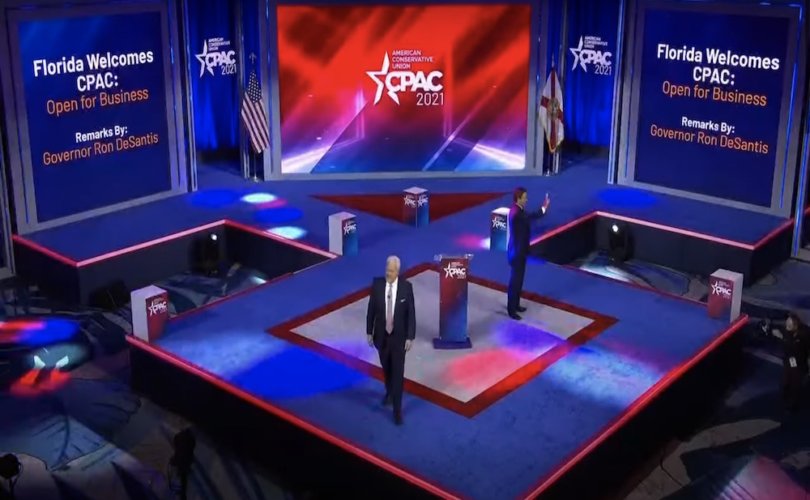 March 3, 2021 (LifeSiteNews) – Just days after hosting the annual Conservative Political Action Conference (CPAC) at one of its Orlando, Florida locations, Hyatt Hotels has succumbed to left-wing pressure to criticize the event and its parent organization, the American Conservative Union (ACU), over far-left online activists’ claims that the stage design resembled the shape of a Nazi symbol.

As CPAC got underway over the weekend, social media erupted with posts claiming that the shape of the stage – a diamond main platform with parallel background stages for entry and exit, connected to the main stage by tails – resembles an odal rune, a letter from a pre-Roman alphabet incorporated into certain Nazi uniforms during World War II.

This is the CPAC stage design below. It is a rune which was used by the SS.

This is the stage from which @tedcruz screeched “freedom.”

The left-leaning Anti-Defamation League acknowledges that, due to the age of the runic alphabet, the shape “can also be found in non-extremist contexts” and therefore “care should be taken to evaluate the symbol in the context in which it appears.” Nevertheless, leftists and their media allies ran with the claim that the stage’s resemblance to the symbol was a deliberate nod to fascists and white supremacists, and began a pressure campaign to punish Hyatt for hosting the conservative event.

“We take the concern raised about the prospect of symbols of hate being included in the stage design at CPAC 2021 very seriously as all such symbols are abhorrent and unequivocally counter to our values as a company,” Hyatt declared in the first of two statements the company issued Sunday. “We discussed directly with ACU leadership who told us that any resemblance to a symbol of hate is unintentional. We will continue to stay in dialogue with event organizers regarding our deep concerns. Any further questions can be directed to CPAC.”

In the second statement, Hyatt said it agreed to host CPAC out of “belief in our role as a hospitality company to help facilitate meetings, events and peaceful expressions of views,” with “constructive public discourse, in particular by duly elected officials…more critical than ever to the preservation of our democratic norms.”

“When we learned that CPAC 2021 stage design had been compared to a symbol of hate, we promptly raised this concern with meeting organizers who strongly denied any connection to such symbols,” the second statement continued. “Had we initially recognized the potential connections to hate symbolism, we would have proactively addressed it prior to commencement of the event. Unfortunately, this became clear to us only after the event kicked off. With CPAC’s denial of any intentional connection to hate symbols and our concerns over the safety of guests and colleagues in what could have been a disruptive situation, we allowed the event to continue.”

The statement also accused “many” CPAC guests of showing “disrespect” to hotel staff over COVID-19 measures.

Stage design conspiracies are outrageous and slanderous. We have a long standing commitment to the Jewish community. Cancel culture extremists must address antisemitism within their own ranks. CPAC proudly stands with our Jewish allies, including those speaking from this stage.

“When we learned of the orchestrated assault on us, we immediately contacted your senior management to set the record straight,” ACU general counsel David Safavian responded in a letter to Hyatt executive chairman Thomas Pritzker. “Together, we quickly responded to these slanderous accusations. Your hotel’s senior management was on notice and acknowledged that these claims were false and agreed to share any statement before its release. We agreed that coordination was critical so that the general public would know the truth and that you would treat your customer with honesty. Thus, we were shocked that the Hyatt waited until after the conference concluded to issue additional statements – ones that are irresponsible, untrue, and contribute to a climate of division and hatred.”

“For months we have collaborated with your team on logistics, including sharing, reviewing, and approving the stage design that was created by one of our subcontractors,” Safavian continued. “The fact that no one on the Hyatt staff ever raised concerns during the process shows the ridiculous nature of your statements. Moreover, your statements falsely conceal your oversight role. In fact, the Hyatt Hotel, with our organization and subcontractors, approved and worked collaboratively to build this stage. Only after a coordinated far-left assault to destroy our conference arose did you succumb to lies and compound them with your own.”

While it is a long-running trope on the Left to compare mainstream conservatives to Nazis, the truth is that actual fringe extremists on the “alt-right,” such as Richard Spencer, openly oppose conservatives on issues such as abortion.