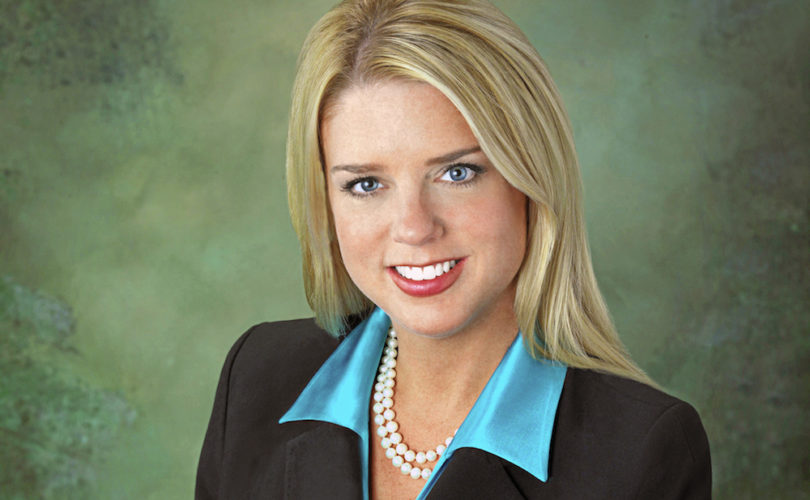 Florida Attorney General Pam Bondi is not backing down in her effort to defend the state's marriage amendment, even in the face of five judicial decisions against it.

On Thursday, the same day that U.S. District Judge Robert Hinkle ruled the state's amendment was unconstitutional, Bondi told reporters that her continued defense of marriage was related to her “oath to defend the Constitution of the state of Florida.”

“When I was sworn in as attorney general, the 37th attorney general of the state of Florida, I took an oath,” continued Bondi. “Six years ago, by over 62 percent of the vote, the voters of this state put [the ban on same-sex marriage] into our Constitution. That is part of the Constitution, which I am sworn to uphold.”

Bondi acknowledged Hinkle's ruling in her comments, including his “stay” of the ruling, and said that her continued defense of the law “is me doing my job as attorney general. And I will continue to do that and if anybody wants me to moderate my message or stand for less, I have a message for them: I am just getting started.”

Bondi has taken fire for her defense of the state law. Critics point to her two divorces and a recent trip she took with her fiance as evidence of a double-standard, and in May she was heavily criticized for saying overturning the state's law would “impose significant public harm.” Same-sex “marriage” advocates took the comments as evidence that Bondi believes heterosexual relationships are superior to homosexual relationships.

Shortly after the uproar over Bondi's May statement, State Solicitor General Allen Winsor said in a statement that “Florida is harmed whenever a federal court enjoins enforcement of its laws, including the laws at issue here.”

“Florida’s voters approved a constitutional amendment, which is being challenged, and it is the attorney general’s duty to defend Florida law,” he added.

Numerous studies, most prominently one done by Mark Regnerus in 2012, show that the best environment for children is that which consists of a married heterosexual couple.