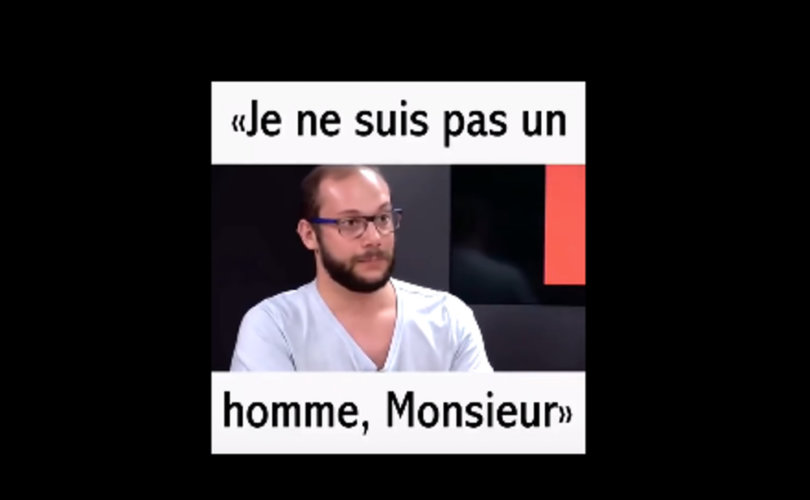 Despite the beard, masculine voice, receding hairline, and light skin tone, this person insists that he is neither a man nor Caucasian, but rather a non-binary half-Lebanese person. YouTube

MONTREAL, July 10, 2018 (LifeSiteNews) – Bearded and with a masculine-sounding voice, the guest with the receding hairline on a French television show quickly takes exception to being identified as a man in a video clip that’s going viral.

“You’re not a man?” the host asks in disbelief in French.

“Your appearance,” the host proffers.

“Ah, well, we must not confuse gender expression with gender identity,” the individual continues.

Put online only seven days ago, that short video clip – it’s less than two minutes in length – on YouTube has already been seen more than 232,000 times.

It seems the guest identifies as “gender non-binary,” neither a man nor a woman.

And even though that guest certainly appears to have light-colored skin, he is equally quick to point out, when someone notes the panel on which the sits is comprised of four Caucasians, that this too is apparently a mistaken perception.

“I’m half-Lebanese,” the manly-looking individual says. “We should question all our stereotypical presuppositions because without even asking you have assumed I am a man and, because of my appearance, you consider me to be Caucasian.”

In the comments section below the video on YouTube, some of those who watched the video mocked the guest’s insistence of a non-Caucasian, non-gender binary identity.

“I am not a man, I’m a dragon who is half-Cameroonian,” wrote someone identified as Anthony Post.

Not to be outdone in chiding the TV show’s guest, another YouTube user claimed also to not be a man but rather a non-binary Yamaha bisexual V8 turbo half-lawnmower, half-tractor. Other YouTube users were equally silly with their suggestions.

At the Le Journal de Montreal daily newspaper in Quebec, journalist Mathieu Bock-Côté tried to make sense of it all in a column headlined A Man Is Not A Woman. After suggesting that people who feel like strangers to their own biological sex must be treated with empathy and insisting good faith efforts need to be made to accommodate them, Bock-Côté also called for common sense to prevail.

“Let’s get real: these are the outliers and a society cannot be redesigned based on them,” Bock-Côté wrote in French. “We cannot let the radical left exploit their unhappiness to justify its agenda of deconstructing identity.”

Entire societies are getting drunk on identity politics and the deconstruction of identity – and no longer even know how to stop the process, the columnist warned.

“They are throwing themselves into the abyss and it is young people who will pay the price for the disorientation caused by the destruction of fundamental points of reference,” Bock-Côté wrote. “They are already paying for it.”