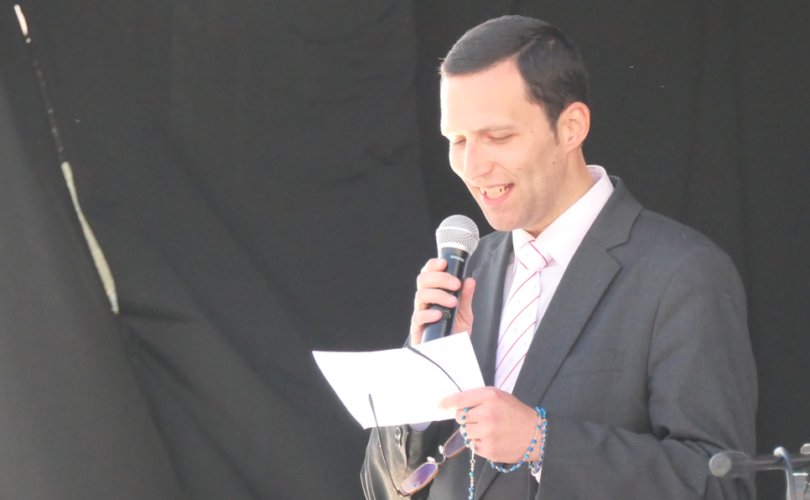 Stéphane Mercier at the 2017 Rome March for LifeClaire Chretien / LifeSiteNews

June 1, 2017 (LifeSiteNews) – The young professor facing termination from his job at Belgium's Catholic University of Louvain for showing his students pro-life arguments says he doesn't fear for his future because “Our Lord is eternally victorious.”

Stéphane Mercier, who is currently under “investigation” by the Belgian university, spoke to LifeSiteNews at the 2017 Rome Life Forum. He revealed that his inspiration for the lecture that caused so much backlash was articles he read on LifeSiteNews.

“It’s thanks to LifeSiteNews that I felt somewhat compelled to say a few things to my students about the truth about abortion,” he said. “Your work has determined me in the best of ways.”

He says he wondered “what would I say on the day of judgment, when the Lord will ask me, 'what have you done with your teaching activity?'”

“I’ve done quite a few interesting things in my opinion, but nothing that really matters from an existential point of view,” Mercier explained. “And so, I thought that I should speak about human dignity.”

To “allow the students to reflect on the importance of human dignity from the very beginning in the mother’s womb,” Mercier showed them non-religious arguments for the humanity of the pre-born child.

“I told them that I’m not here to teach them what to believe,” he said. “I’m here to teach them that they have to reflect by themselves, not on the basis of slogans that are being given by the mass media or the culture of death. They have to think by themselves and reflect on real arguments…as I teach philosophy, I didn’t want to enter the theological realm. I strictly kept to philosophy.”

Most of the students were “quite welcoming” to considering this viewpoint, he said. But a few weeks later, he made “another strong statement,” this time against gender studies and its accompanying ideology. He explained how gender ideology is “a matter of ignoring biology” and reality.

Using summaries of books from prestigious Paris book publishers, Mercier made the case for why gender ideology is “completely confused and wicked.”

Just a few days later, the Belgian media “became rabid” – not about Mercier's comments on gender, but about his abortion lecture from a few weeks before. His gender presentation hadn't yet been published on his lecture website, and he said if his opponents were going to call him “homophobic,” then they should be calling the prestigious Paris publishers whose books he used “homophobic” as well.

“The authorities of the university reacted very quickly and very emotionally in favor of the media and against me,” he said.

The university quickly issued a statement saying it “defends the fundamental right to abortion, and particularly women’s right to choose.” It suspended Mercier and launched an investigation into the matter.

The Catholic University of Louvain said that regardless of what its investigation concludes, “the right to abortion is enshrined in Belgian law and the note that was brought to the attention of UCL is at odds with the values upheld by the university. Conveying standpoints that contradict these values in the framework of a teaching course is unacceptable.”

“They really want me to be fired,” said Mercier, whose contract will be up for renewal in September. He's working with two lawyers who have prepared “a big file showing that the whole process of the university against me is ridiculous, biased, and illegal.”

“If the university says that they were wrong, they have to fire two or three people” in top positions, he explained. “If they say I am wrong, they have to confront with…the fact that I am just speaking philosophically in my own right and also in conformity with the teaching of the Church, and that should be expected in a Catholic university.”

Despite the stressful ordeal, Mercier is calm and at peace.

“I am not afraid because we don’t have to be afraid,” he said. “We are on the winners' side actually. And Our Lord is eternally victorious.”

He knows his career is “quite compromised to say the least.”

This doesn't bother him “because God wants what is best for me even more than I do. So He will help me to find out a way out of this predicament.”