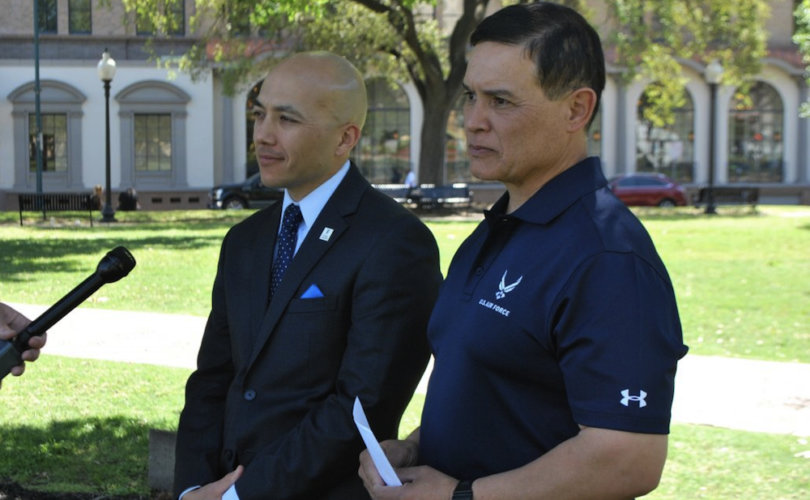 SAN ANTONIO, Texas, April 12, 2017 (LifeSiteNews) — Col. Michael Madrid knows he is not the only person in the military who has experienced “religious hostility” for his beliefs and so he decided to take a stand out of concern that “religious freedom will continue to slip away.”

Madrid, whose 26 years of military service earned him the Meritorious Service Medal four times, was punished by his new commanding officer because Madrid believes marriage is the union of one man and one woman.

Despite Madrid being completely cleared after a thorough Air Force investigation into allegations that he spoke derogatorily about homosexuals, Major Gen. John E. McCoy arbitrarily and without evidence accused Madrid of lying and issued a surprise Letter of Admonishment against him, ensuring he would never be promoted and could be demoted.

LifeSiteNews:  Tell us about your 26-year record of military service.

Col. Madrid: I began my military career as a Naval aviator. In the Air Force, I attended Uniformed Services University of Health Sciences and became a physician. As an Air Force flight surgeon, it has been my privilege to look after and care for the Air Force’s “human weapon system.”

LSN:  Why do you believe marriage is between one man and one woman?

Col. Madrid: It’s the definition of marriage according to the Bible.

LSN: How did you meet the Airman who accused you of discrimination?

Col. Madrid: My duties included supervision of numerous aerospace programs to include supervision of flight surgeons. I tried to mentor him and stood by him to help him through his personal struggles until I became aware of the criminal nature of his issues.

LSN: If you were never called as a witness, why did the Airman file a complaint?

Col. Madrid: I supported his being court-martialed because of the serious nature of his criminal actions that could have caused someone to be seriously hurt, or worse. (Note:  The gay Airman was discovered to have been prescribing narcotics illegally, performing duties while high, and illegally bringing a loaded weapon onto the Air Force base.) He knew that I supported his being court-martialed, and I believe he wanted to discredit me, a senior officer, so that I would not testify against him.

LSN: Were you surprised by Major Gen. McCoy's Letter of Admonishment against you?  What was your relationship like with McCoy before that?

Col. Madrid: To say I was shocked is an understatement. I didn’t really have any relationship with him prior to this. When I found out he wanted to talk to me, I had no idea what it could possibly be about.

LSN: What do you mean when you say you feel like you have to “look over my shoulder” now?

Col. Madrid: After this incident, I was warned that I should be careful not to talk about my Christian beliefs because it might offend someone. I am not someone who feels ashamed of my faith or that I should have to hide it, but I certainly don’t want to go through this again just because of my religious beliefs.

Col. Madrid: They have not responded that I am aware of.

LSN: What do you think of the military's former “Don't Ask, Don't Tell” policy? What have you observed as the effect of its abandonment?

Col. Madrid: I don’t really have an opinion on it other than to say that I believe all service members should be treated with dignity, respect, and professionalism regardless of their beliefs. I just hope the Air Force treats me with the same dignity and respect.

LSN: What do you think of President Obama's aggressively instituting pro-gay and pro-transgender policies in the armed forces? Have they affected troop morale or cohesion?

Col. Madrid: That is a separate issue. I have no comment.

LSN: Are you aware of other cases of religious discrimination against Christians in the military?

Col. Madrid: I have seen an Air Force Chief of Medicine comment that an officer didn't deserve to be a medical provider because, based on his beliefs, he did not wish to provide the abortion pill. After working with First Liberty Institute, and learning more about their work in the military, I am much more aware of the growing epidemic of religious hostility in our military.

LSN: How has this incident affected your family? Your wife? Yourself personally?

Col. Madrid: My family, friends, and colleagues are a source of steadfast support; they know my heart and the injustice of the actions taken against me. But I am concerned for what actions may occur against my family and me. I have to be increasingly cautious in all my interactions, which is difficult as a leader.

LSN: Thank you, Colonel, for sharing with us.

Col. Madrid: I appreciate your prayers.

“Colonel Madrid is known to be a devout Christian,” First Liberty Institute’s Director of Military Affairs Mike Berry explained. “Based on the available evidence, we can only conclude that Major General McCoy judged and punished a decorated Air Force officer simply because he became aware of the officer’s traditional religious views.”

First Liberty Institute is representing Col. Madrid. The religious freedom defenders sent a demand letter on March 29 to the U.S. Air Force, explaining that Col. Madrid was denied due process and that McCoy’s Letter of Admonishment must be rescinded.

“I’m not the only one who has experienced this kind of religious hostility,” Col. Madrid said. “And I know that if I do not take this stand, religious freedom will continue to slip away.”

First Liberty warns that if the Letter of Admonishment is not rescinded, Col. Madrid’s lifetime of service to the United States will be dishonored and his rightful benefits destroyed.

“With the Obama administration flooding the armed forces with political correctness, many service members felt compelled to hide their faith,” a First Liberty press release explained. “Others who did express their beliefs were punished or falsely accused of bigotry.”

“It’s unfair, even cruel, to ask men and women who lay their lives on the line for America’s freedom to be denied their most basic right: religious liberty,” the press release continued. “Fortunately, the newly established presidential administration has proudly advocated protection for religious freedom and support for the U.S. military. But the battle is still underway.”

First Liberty encourages the public to sign a letter of support online.