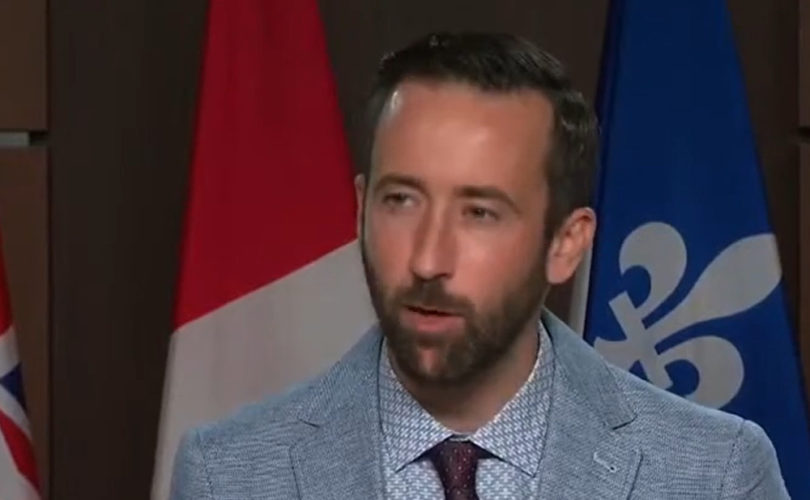 OTTAWA, Ontario, June 17, 2021 (LifeSiteNews) — A politician, a researcher and doctors have spoken out against the ongoing censorship and intimidation of those who question the mainstream COVID-19 narrative.

Derek Sloan, a former Conservative — now Independent — MP, was ousted from his party for criticizing the government’s actions during the COVID-19 pandemic. Today he hosted a press conference on Ottawa’s Parliament Hill to give Canadians who have been hurt by COVID-19 policies a chance to speak freely.

“Many people at high levels across the federal and provincial governments are misleading the public,” Sloane stated. “And the media must now hold these officials accountable for their lack of transparency and honesty on these matters.” (Note: presentations begin at 25:45 in below video. Derek Sloan is first, Dr. Bridle begins at 35:05, Dr. Philips 48:53, Dr. Welsh 54:25 ).

Sloan stated that several weeks ago he issued a call for whistleblowers in Canadian medical and scientific communities to reach out to him. In response, doctors, nurses, medical scientists, and other experts have responded.

“At times the information they have provided has been shocking,” said the MP for Ontario’s Hastings—Lennox and Addington riding.

“However, the single uniting factor was that none of their stories were being told, either here in Parliament or in our national media. In fact, these individuals are being blocked at many levels from telling their stories.”

These included a veteran nurse who reported that the COVID-19 figures for her community were being inflated and also that some of the COVID-19 patients had already been vaccinated. She was afraid to say anything publicly because the College of Nurses of Ontario was threatening to punish nurses who spoke out. They also included physicians who rebelled against threats made on April 30, 2021, by the College of Physicians and Surgeons of Ontario (CPSO) against doctors who spoke out. Sloan said that as a result of the CPSO warnings, his office was “inundated” with calls from practitioners. He told the press that he had spoken with “dozens and dozens” of doctors personally, and that he was “certain there are hundreds of doctors and scientists across this country who are facing extreme pressure and censorship for asking legitimate scientific questions.”

The MP also heard from a 30-year-old Winnipeg woman who was diagnosed with inflammation four days after receiving her first Pfizer dose. She told him that she knew of three other women under 35 in Winnipeg who had developed heart issues after vaccination.

“The most concerning part is that we are still being advised by our doctors to get a second dose,” the woman wrote. “At this point, it feels like they are purposely trying to harm us.”

A member of the Canadian Armed Forces (CAF) contacted Sloan to describe the pressure soldiers are facing to take the vaccines and their concerns that they will be mandatory for all CAF members in November.

“It was like a nuclear bomb went off in my world.”

Sloan was joined by Dr. Byram W. Bridle, a viro-immunologist from the University of Guelph, Dr. Patrick Philips from Englehart Hospital, and Dr. Don Welsh from the University of Western Ontario. All three condemned the “unprecedented” censorship against normal scientific debate. Two described the harassment they had suffered from telling the truth, boldly asserting that there is evidence Ivermectin is an effective preventative and treatment for COVID-19.

Bridle said that as a “public servant” at a publicly-funded university, he sees it as his responsibility to Canadians to give them “the most informed answer” that he can to those questions “so that they can make informed decisions.” As a vaccinologist who specializes in novel vaccines, he had read “very deeply” into the literature and, like many of his collaborators, had developed concerns about the COVID-19 shots. Therefore, two weeks ago Bridle told a radio interviewer that there could indeed be a possible link between COVID-19 vaccines and cases of heart inflammation in young men that had been reported around the world.

“After I did this interview … it was like a nuclear bomb went off in my world and my life was thrown upside-down,” Bridle said.

Within 24 hours, a libelous website was set up with his domain name, a fake Twitter account began to slander him, and he has been harassed by phone, email, and social media ever since. Some of the harassment is coming from colleagues at the University of Guelph, and one of the members of the Ontario COVID-19 Science Advisory Committee joined the smear campaign by linking to the slanderous website, the professor said.

“They even went so far as to release confidential medical information about my parents,” he said.

Bridle is very concerned about “healthy Canadian children” receiving the under-tested COVID-19 vaccines and has written a guide for parents about the jabs. He is a member of the Canadian COVID Care Alliance, a group of experts committed to giving the public the facts about the virus, the vaccines, and the alternative treatment.

Revealing that he represented doctors, politicians and even media who are too afraid to speak out publicly, Bridle concluded his speech by saying, “Right now I don’t recognize the country I was born into, and I would simply ask all Canadians, ‘Please, I simply want us to learn to respect one another again.’”

Dr. Patrick Philips described how lockdowns had led to suicidal children and patients coming to the emergency room only after cancer had spread through their bodies. This inspired him to speak out despite the CPSO’s threats against physicians.

“They were very explicit and threatened an investigation and discipline for any physician who expressed any of the negative aspects of any of these interventions, no matter what the evidence,” Philips said.

— Article continues below Petition —
PETITION: No to mandatory vaccination for the coronavirus
Show Petition Text
1081974 have signed the petition.
Let's get to 1100000!
Thank you for signing this petition!
Add your signature:
Show Petition Text

The doctor said that he had done a lot of research, and there is a lot of evidence for alternative prevention against COVID-19, including the use of Vitamin D and Ivermectin.

“I want to emphasize that there are over 85 studies and 27 treatments trials,” he said. “Many of these are peer-reviewed scientific literature that have shown a 56% reduction in mortality in patients who take Vitamin D compared to those who don’t for COVID-19.”

But scientists have learned even more in the past few months about Ivermectin, Philips added.

“We have on our hands a very safe treatment that has won the Nobel Prize … At this point we have 97 studies and over 30 randomized control trials that have shown a huge benefit to this medication in reducing the risk of death and hospitalization in patients who have COVID,” he continued.

“There is also a role — and there are 14 randomized control trials — for prophylaxis, meaning taking this medication for high-risk patients early … can reduce your chances of catching COVID in the first place …”

Philips revealed that the CPSO had been threatening to take away his and his colleagues medical licenses for promoting what the professional organization calls “unproven treatments” which are actually well-supported by scientific research.

He said that, knowing what he knows, he would not be able to live with himself if he did not give Ivermectin to a suffering COVID patient in his office. The doctor was audibly shocked that the Ontario Science Table is even recommending against Vitamin D.

“Every Canadian citizen needs to see this presentation”

In introducing the press conference, Sloan cited his own background as a critic of the Canadian government’s COVID-19 policies.

“I have been among the most outspoken of all Canadian politicians with my concerns towards the way the federal government, in addition to our provinces and territories, have responded to the pandemic,” the MP said.

“Whether it was never-ending lockdowns, the curtailing of constitutionally protected rights, the extreme measures taken against Canadian small businesses, or basic concerns about informed consent and vaccination, mental health and deferred medical procedures that have caused a cascading effect on our health system, I’ve consistently stood up for Canadians, when no other federal party would.”

Stephen Campbell of Manotick, Ontario, shared with LifeSiteNews a letter he had sent to Sloane, praising the presentation and saying that its duration was “frankly the most important hour” he and his wife Pamela had “spent in the last year.”

“Every Canadian citizen needs to see this presentation,” he wrote.