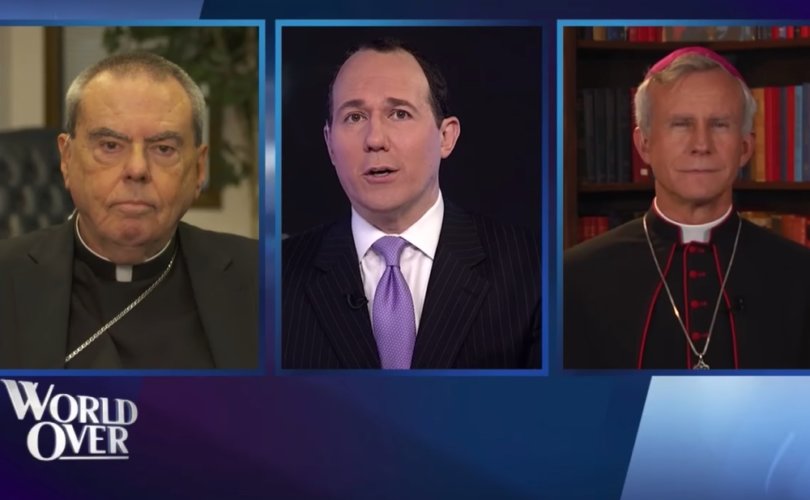 WASHINGTON D.C. October 7, 2019 (LifeSiteNews) — EWTN news host Raymond Arroyo asked U.S. Bishops Michael Sheridan and Joseph Strickland in a joint interview last week about whether U.S. Catholics who are troubled by Pope Francis’ teachings and statements are schismatics or part of a “plot” to “get” the pope.

Regarding accusations by Rev. Antonio Spadaro that some American Catholics are fomenting schism in the Church, Bishop Strickland of Tyler, Texas said, “I don’t see it.”

“I see people of real committed faith in the Real Presence — those who believe that the bread and wine truly becomes the Body and Blood of Christ — it’s those people who are concerned and asking, and saying ‘Give us the truth of Christ clearly.’ All this confusion isn’t helpful for them, for their children, for their grandchildren. So I’d say, absolutely, the reality is to live Jesus Christ. Everything else really falls by the wayside, as it has through the centuries – if it is not of Christ, it won’t last,” he said.

Strickland, an outspoken defender of traditional Catholic teachings who frequently uses social media to proclaim its truths, said that Catholics in his rural diocese are seeking answers about the “solid deposit-of-faith truth.” He believes that Pope Francis is dealing with a number of “influences” that “dilute his message sometimes and also confuse people about what the truth really is.”

While there are no faithful Catholics that he knows in his diocese who are “anti-Pope Francis,” Strickland said, “they are seeking to follow Christ with many who are ignoring the message of Jesus Christ. So, those are the most faithful people. They love the Pope, they love the papacy, they love the Church, they love Jesus Christ, and are concerned at some of the confusion that so many around Pope Francis are promulgating.”

Bishop Sheridan of Colorado Springs, Colorado agreed that many people are confused by some of the Pope’s teachings and “off the cuff remarks.” Sheridan serves on the Committee on Education of the U.S. Conference of Catholic Bishops and on the Board of Governors of the Pontifical North American College in Rome, and the Board of Directors of Catholic Relief Services.

When he was asked how the Pope’s remarks should be interpreted, he said that they must be seen in the light of tradition and the Magisterium. “If there is confusion, you know where to go. And they do,” Sheridan said.

Arroyo asked the pair of bishops questions about the Amazon Synod which is now currently underway in Rome. In the Instrumentum Laboris — the preparatory document for the synod — the prospect of ordaining “viri probati” — mature married men — to the priesthood is raised, as well as how to respond to the specific needs of the Amazonian region of South America. Critics of the document and the synod have raised concerns about whether the synod could foreshadow great changes in the Catholic Church, which in the Latin rite has had celibate priests for centuries. The influence of certain German bishops and advocates of the so-called Theology of Liberation has also been noted by critics.

When Arroyo asked whether priestly celibacy should be optional, Bishop Sheridan responded: “I don't believe it should be optional, Raymond. I don’t think our recent popes who have spoken about this would think so either. In fact, if I'm correct, Pope Francis has said that optional celibacy is not what this synod is about. But I think that this idea of ordaining viri probati just to be 'Mass' priests is, to me, a strange thing. It separates the three-fold office of the priesthood out and simply makes them 'Mass' priests. I understand the reason behind it. But it seems to make more sense if we tried to evangelize that region of South America so that priests could be raised up from that population.”

Strickland agreed with Bishop Sheridan that evangelization is needed in the Amazonian region to encourage vocations to the priesthood, but he also said that “we need celibate clergy in the history of the Church, in this age, more than ever because we need that counter-sign to a culture that says that the lifestyle of a committed, chaste, celibate priest doesn’t make sense.”

Strickland insisted, “It makes absolute sense for humanity. To lose that, even for a portion of the Church, I think is a diminishing of what evangelization is about.”

Arroyo recalled the Vatican decisions that allowed female altar servers, Extraordinary Ministers of the Eucharist, and distribution of Holy Communion in the hand, have since become widespread. Despite explanations that married priests would be limited to the Amazonia region, Arroyo asked Strickland whether the practice might actually become universal. Strickland said he fears that if married priests are approved for that region, other regions would appeal for the same.

“To bring the light of the Gospel,” to Amazonia, said Strickland, “is always the answer,” adding that Amazonia has its challenges like anywhere else. “Let’s not change it to adapt it. Let’s bring the fullness of the light to them.”

Strickland agreed with Germam Cardinal Gerhard Muller, the former head of the Congregation for the Doctrine of the Faith, that the prohibition of a female priesthood stated by St. John Paul II is indeed “dogmatic,” even while he praised the “complementarity” of the role of women in the Church.

Arroyo noted the influence of German prelates in the preparations for the Amazon synod and that, while Pope Francis has gone on the record in opposition to female ordination, he appears to be overshadowed. Sheridan said that it is one of the strangest things he has seen in 50 years, noting that some of the German bishops have actually opposed the Pope on the issue.

“I don’t know what this is going to come to, but I fear for it,” Sheridan said.