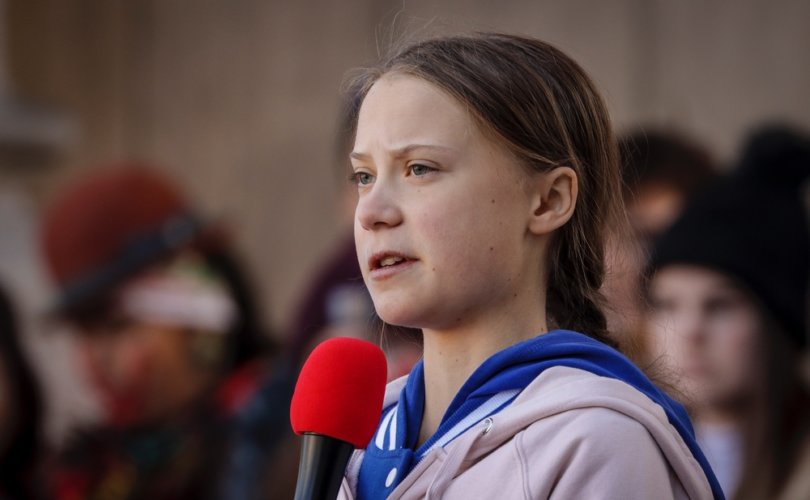 After returning home from school on October 4, eight-year-old Joylaea Blazevic of Toronto told her mother that they had only eight years left to live. Joylaea and her seven-and-eight-year-old classmates had watched a video of Thunberg’s famous UN Climate Action Summit speech in the library of Elmbank Junior Middle Academy that day.

Joyalea’s mother, Lejla Blazevic, told Canada’s National Post that the presentation had confused and scared the little girl and her friends.

“She’s like, ‘Mommy, they said that we’re going to die in eight years,’” Blazevic recalled.

“They were terrified with the information.”

Joylaea also told her mother that one of her classmates shouted, “I don’t want to die,” which led to similar cries among the children.

A spokesman for the Toronto District School Board told the National Post that the teacher had assured the children that “[it] wasn’t true” and that she had followed up with the boy and his parents afterwards.

“We were assured from the family that indeed he was just joking,” the spokesman said.

In her impassioned speech, the furious Swedish teenager told her hearers that the world is on the brink of a mass extinction.

“People are dying. Entire ecosystems are collapsing. We are in the beginning of a mass extinction, and all you can talk about is money and fairytales of eternal economic growth. How dare you!”

Thunberg, 16, emphasized that she is a child, one with a serious grievance against adults.

“I should be back in school on the other side of the ocean,” she told her listeners. “Yet you come to us young people for hope. How dare you! You have stolen my dreams and my childhood with your empty words.”

Thunberg also told her audience that the science around climate change has been “crystal clear” for over 30 years. She stated that current plans to cut carbon emissions in half in ten years would give the world only a 50% chance of avoiding raising the global average temperature by 1.5 degrees, risking “setting off irreversible chain reactions beyond human control.”

After Greta’s speech, the children were shown a video of a “carbon clock” counting down from eight years: “the estimated amount of time it will take to emit enough carbon to warm the world by 1.5 degrees Celsius, according to the Mercator Research Institute on Global Commons and Climate Change,” the National Post reported.

‘Children this young are highly impressionable’

Pediatrician Dr. Michelle Cretella told LifeSiteNews via email that politics, not pedagogy, must have been the motive for showing such little children Thunberg’s speech.

“You know that politics – not the best interests of children – is a school system's top priority when its staff defends showing Greta Thunberg's apocalyptic UN climate change speech to 7 and 8 year old kids,” she said.

“Children this young are highly impressionable concrete thinkers who interpret what they hear very literally,” she continued.

“Between the ages of 7 and 11, children gradually become able to understand specific examples of cause and effect, but they still struggle with abstract ideas and putting issues in context.”

Cretella added that children this age do not need to hear the horrors about climate change. She recommends that they are taught the basics of environmental science in a way that is interactive and instills a desire to be good stewards of nature.

“Classroom projects centered around growing vegetables, recycling items at school and home, and having a pet item drive for a local animal shelter, are all developmentally appropriate ways to teach children to care for our planet,” she suggested.

Tanya Granic Allen of Parents as First Educators (PAFE) told LifeSiteNews that children deserve to go to school in peace and safety and not be subject to propaganda.

“Climate sensationalism has had a destructive effect on some children and continues to induce ‘eco-anxiety,’” Allen stated over email.

She objects to children being dragged into ongoing debates among scientists.

“Certainly, teaching children about environmental stewardship is a healthy and good thing,” she said.

“However, since the quantitative man-made effect on climate change is still being debated by the scientific community, and until there is scientific consensus, children’s classrooms ought not be used as testing labs for theories.”

Retired Glasgow school teacher and founder of Catholic Family Voice Pauline Gallagher agrees that the presentation described by the National Post was inappropriate for children.

“I would not even have used this with high school children. They worry ― a lot.”

Gallagher pointed out that the human psyche is not equipped to safely absorb the quantity and degree of bad news contemporary children are exposed to.

“Every awareness-raising lesson needs to plant seeds of hope, not rob pupils of their peace of mind,” she said.

“There is always hope. What purpose is served by overwhelming our children?”