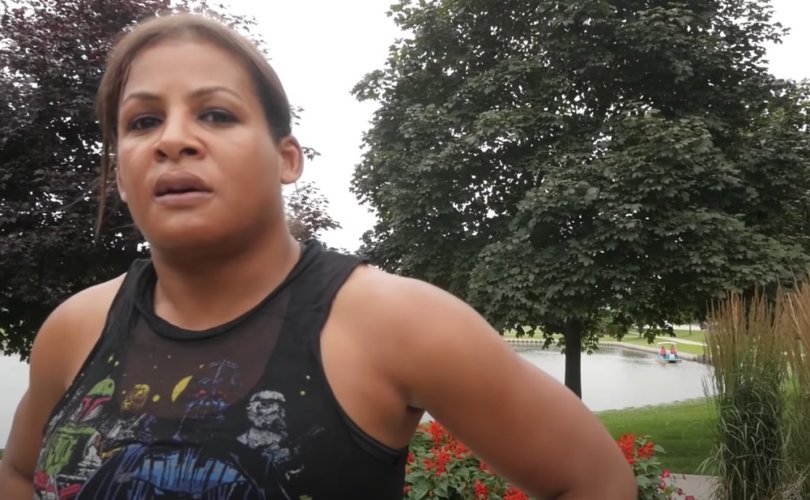 Boyd Burton, aka Fallon Fox, a man who has competed as a woman in mixed martial arts cage fights and has celebrated fracturing the skull of an opponentYouTube / screenshot

June 18, 2020 (LifeSiteNews) — A male cage fighter who claims to be a woman has signalled his enjoyment of hurting women.

Transgender mixed-martial artist Fallon Fox, 44, tweeted on June 16 that he loves “smacking up TE[R]FS.” TERF, which stands for “trans-exclusionary radical feminist,” is an expression used by trans activists for any woman who will not say that biological males are, or can become, women.

“For the record, I knocked [two] women out,” he tweeted to other Twitter users, including Harry Potter author J.K. Rowling.

“One woman’s skull was fractured, the other not. And just so you know, I enjoyed it. See, I love smacking up TE[R]Fs in the cage who talk transphobic nonsense. It's bliss. Don't be mad.”

Fox was responding to a Twitter user who criticized him for participation in the women’s division of the violent sport. Fox had recently used the medium to insult Rowling.

Fox’s tweet echoed a November 15, 2015 post in which he said that seeing female martial artist Ronda Rousey get hurt in a fight with victor Holly Holm made him happy.

“Just so everybody knows. Watching @RondaRousey getting her face cracked did bring a HUGE smile to my face.”

“It's no surprise that a man who chooses to fight women in Mixed Martial Arts speaks using such grotesque woman-hating language,” Keen told LifeSiteNews by email.

Keen added that the “dehumanising tactic of calling women TERFs has been very effective in threatening us and using violence to silence us.” She called for the public to take action against Fox’s views.

“What is more alarming is that this is considered acceptable by state-run entities and social media giants,” she said.

“It is time to act against this. I suggest that we all stop supporting sports, schools, politicians and public figures who endorse these harmful views, endorsement including their complicity in silence.”

Caroline Farrow, the Campaign Director for CitizenGO in the U.K. and Ireland, told LifeSiteNews today that Fox’s violent message “perfectly demonstrated” why women object to men competing in their sports.

“Fallon Fox’s tweet perfectly demonstrates women’s fears when it comes to allowing biological males to participate in female sports, as they clearly enjoy a competitive advantage and can endanger the physical safety of female athletes,” Farrow said.

“Fox is openly glorifying and [reveling] in the serious physical injuries he inflicted on his opponent and also threatening to do the same to any other female opponent who dares to challenge his entitlement to compete as a woman.”

Farrow stated that these comments were “deeply unprofessional and unsporting” and showed disregard for the health and safety of Fox’s opponents.

“Fox should be immediately banned from the sport by its governing body along with all other biological males,” she said.

According to the New York Times (NYT), Fallon Fox grew up as Boyd Burton, the second of three children born to a mixed-race, conservative Christian family. Growing up, Burton used to try on his mother’s and sisters’ clothing secretly. After high school, he married and had a daughter. The NYT says that Burton then served in the Navy for four years before continuing his education. Burton became a trucker to save money for his 2006 sex surgery in Thailand. In 2007, he divorced his wife.

Burton told the NYT that after he discovered women’s mixed martial arts, he watched them on video for “days on end.” He emphasized his interest in the bare-knuckle aspect of the sport.

“It was like, wow, women are fighting,” he said.

“I remembered watching the first U.F.C. You couldn’t get it on TV. They were doing it bare knuckles. No gloves. I wanted to do that.”

Now presenting himself convincingly as a woman, Burton/Fox took up women’s mixed martial arts without revealing that he was a biological male and “turned pro” in 2011. In his 2013 interview with the NYT, Fox exulted in the memory of punching a woman in his first fight.

The NYT reported: “As Fox watched video of her [sic] first fight on her cellphone recently, her eyes danced, and she said: ‘There’s the triangle. Then I punch her in the face. Into arm bar. She’s already out.’”

Worried that his secret would be revealed, in August 2012 Fox sought advice from the National Center for Lesbian Rights about coming clean. His plans were sped up by a savvy reporter, however, who got in contact. On March 5, 2013 Fox told his story to Sports Illustrated and the online Outsports magazine.

Fox’s continued career in women’s professional mixed martial arts was opposed by many MMA fans and female athletes but upheld by sporting authorities. Female MMA champion Ronda Rousey, a former Olympic athlete, criticized Fox’s decision to fight in the women’s division, saying that Fox still had a male bone structure and that it was “unfair” for him to compete.

On September 13, 2014, Fox fractured the skull of female opponent Tamikka Brents, damaging an orbital bone and giving her a concussion.

In a post-fight interview, Brent said that she had “never felt so overpowered” in her life.

“I’ve fought a lot of women and have never felt the strength that I felt in a fight as I did that night. I can’t answer whether it’s because [he] was born a man or not, because I’m not a doctor,” she stated. “I can only say, I’ve never felt so overpowered ever in my life, and I am an abnormally strong female in my own right.”

His “grip was different,” she added.

“I could usually move around in the clinch against…females but couldn’t move at all in Fox’s clinch.”

In 2014, Fallon Fox was inducted into the National Gay and Lesbian Sports Hall of Fame. In 2020, his Outsports magazine interviewer declared Fallon Fox “the bravest athlete in history.”