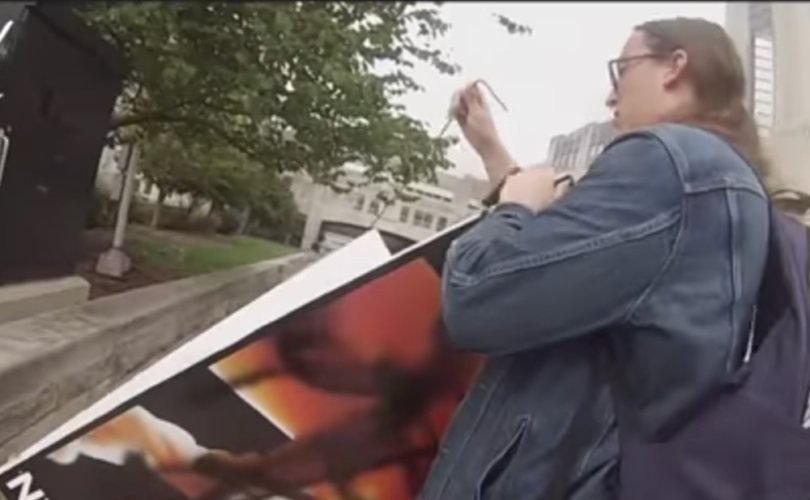 October 10, 2018 (LifeSiteNews) – Amid a reported increase in attacks directed at the latest outreach effort of the pro-life group Created Equal, an Indiana University student attempted to steal and repeatedly vandalized the group’s signs as university officials aided the student in fleeing.

Created Equal released video Wednesday of what it’s calling the most shocking example of pro-abortion aggression toward the group in the first week of its Road Trip for Life tour on the Bloomington campus of Indiana University (IU), the first part of the Ohio pro-life group’s 40-school fall outreach.

While repeatedly hurling profane insults at a Created Equal field captain, the male IU student first tried to steal and bring to his car the group’s signs showing images of aborted children. After the field captain retrieved the signs and the pro-abortion student initially fled, he then returned to spray paint and otherwise destroy the signs, still cursing the pro-lifers.

Later, finally fleeing on his bike, the pro-abortion student stated, “You want women to be child-rearing surrogates that don’t have any rights. And I f***ing hate you.”

Arguably more disturbing than the student’s actions, Created Equal says, was the failure of IU administration officials on site to intervene.

The university had dispensed officials to the location of Created Equal’s outreach, and they were present when the student first stole the signs and tried to leave with them in his car. Before the student could take off with the signs, and Created Equal’s field captain recovered the signs from the would-be thief’s car, the car door remained open.

The first IU official shown in the video then says to the pro-abortion student in the car, “I’ll close it for you,” and shuts the door, allowing the perpetrator to flee.

“He then walks from sign to sign, spray painting and breaking signs, violently throwing bungee cords and metal rods from our equipment,” Harrington explained.

The pro-life group’s team take the signs from his reach and attempt to stand in front of them, as another IU administration official says to the pro-abortion vandal, “Sir, I’d like to encourage you to stop.”

She made no actual attempts to stop him, according to Created Equal, and the group’s team leader had to call police and pursue the pro-abortion perpetrator on his own because of university administration’s failure to intervene.

The video continues with police detaining the pro-abortion student, and explaining to the Created Equal representative that they’d file for a warrant for disorderly conduct on him, and likely deal with him later. Should the perpetrator return after being warned about his disorderly conduct, the officer said, he will go immediately to jail.

Pro-life groups have reported violence directed toward their displays on campus and demonstrations in general for years, and began noting last year how violations of free speech rights for pro-life students are escalating across America beyond the vandalism of pro-life displays.

The pro-life group captured pro-abortion aggression toward its representatives last fall, too.

In April 2017, a pro-abortion volunteer nearly ran down an Ohio priest after trying to steal Created Equal’s signs during a peaceful pro-life demonstration, injuring him in the process.

Last week, a pro-abortion male kicked a pro-life female in the shoulder during the annual Life Chain in Toronto, and another pro-abortion woman assaulted pro-life demonstrators in the same city.

Conservative writer Denise McAllister announced last month she would take a break from social media after getting threats of death, rape, and other sorts of violence because of a pro-life tweet she wrote.

Pro-abortion supporters have as their example leaders in the abortion industry and the political left, who call more and more for pro-life supporters and conservatives to be assailed in public and at home.

Planned Parenthood Action Fund tweeted last week to U.S. senators that it was “coming for” them if they voted to confirm then-Judge Brett Kavanaugh to the Supreme Court because of the threat his spot on the High Court is presumed to pose to Roe v. Wade.

A Minnesota special-needs teacher recently resigned after calling on Twitter for someone to murder Justice Kavanaugh.

Created Equal encourages concerned citizens to contact IU President Michael McRobbie regarding the administration’s failure to intervene and defend the rights of peaceful pro-life demonstrators when their display was attacked on the IU campus.

To respectfully express concerns to McRobbie: