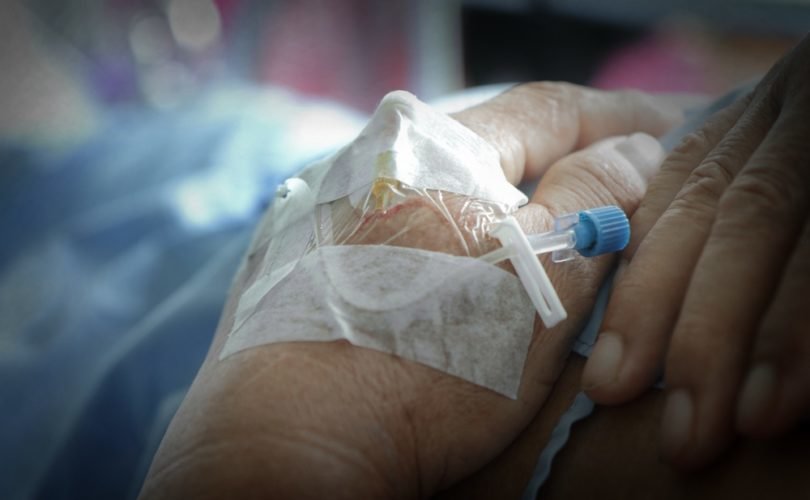 LAVAL, Quebec, July 22, 2021 (LifeSiteNews) — A Quebec nurse has testified that in accordance with provincial health department directives, her long-term care home administered morphine to coronavirus patients instead of caring for them to prolong their lives.

“I had never seen deaths happen so quickly,” Sylvie Morin told the Globe and Mail. Morin was an assistant chief nurse at Sainte-Dorothée, a long-term care (LTC) home where more than 100 residents died last year during the “first wave” of COVID-19.

She explained that the nursing home staff were instructed to give the residents thought to have COVID-19 a “respiratory distress protocol” that included morphine, the sedative Ativan, and the anti-nausea drug scopolamine. The Mayo Clinic notes that common side effects of injected morphine are “difficult or troubled breathing,” “irregular, fast or slow, or shallow breathing,” “shortness of breath,” and “very slow breathing.”

“You should not take morphine if you have severe asthma or breathing problems…Morphine can slow or stop your breathing,” warns drugs.com, a popular reference website that offers “free, peer-reviewed, accurate and independent data on more than 24,000 prescription drugs, over-the-counter medicines.”

Of Ativan, the Mayo Clinic warns, “This medicine may cause respiratory depression (serious breathing problem that can be life-threatening), especially when used with narcotic pain medicines.”

Morin said the protocol is “not what kills the person. It makes them more comfortable,” but pointed out that she had never seen such a rapid track to death.

“The person had symptoms, we tested, we got the results 24-48 hours later. A day later, they were dead. It wasn’t long.”

“They didn’t all die but most did,” said Morin.

The nursing home procedures stemmed from provincial Health Department orders, which were designed to “offload 80 per cent of hospital patients who didn’t need acute care,” so that hospitals weren’t overwhelmed with COVID-19 patients.

Such patients were either discharged or sent to LTC homes, according to a document filed at a coroner’s inquest, the Globe and Mail reported.

A health-board planning document also filed at the inquest revealed that the families of LTC residents were contacted to change their loved ones’ level of care to “move towards C and D levels.”

C and D levels of care aim to alleviate pain as a patient approaches death, while A and B levels are geared towards prolonging life.

Jean-Pierre Daubois, whose mother Anna José Maquet was among those who died at Sainte-Dorothée, told the Montreal Gazette that in retrospect, “the decisions that were taken to call the families and change the level of care, for me, were nothing but death sentences.”

Daubois also recounted that on the eve of his mother’s death, he got a call from a social worker who told him there were no COVID-19 cases on his mother’s floor.

Morin recalled how her unit supervisor was anticipating a wave of deaths in early March.

“She was saying if we have COVID, it’s going to empty the LTC,” said Morin. “She had 250 death certificates, 250 forms for the respiratory-distress protocol. I looked at it and I said, ‘come now, they’re not all going to die’. But it was all set up ahead of time.”

Another nurse, Agnieska Mroz, said that she saw a Sainte-Dorothée resident struggling to breathe, whom staff could not send to a hospital because of the care-level restrictions. The resident’s family eventually called 911 themselves.

The coroner’s inquest is examining the deaths of patients in long-term care homes throughout the COVID-19 pandemic, which account for more than 60 percent of fatalities in Quebec’s “COVID-19” death wave.

The Montreal Gazette reported, “The objective is not to find a guilty party but to formulate recommendations in order to avoid future tragedies.”

Alex Schadenberg, Executive Director of the Euthanasia Prevention Coalition, said “these are cases of murder” that call for criminal investigation.

“This should be treated as a criminal case. It should not be treated as, ‘We’re going to investigate what we did wrong to make sure we’re going to do it right next time.’ These were criminal decisions,” Schadenberg told LifeSiteNews.

“They should have been smart enough to know that what they were doing was causing death,” said Schadenberg. “If you have a respiratory issue, [morphine] will then cause that person to die. And COVID was something that, of course, they should have recognized is affecting their respiration.”

“Not just a few people died. A few people often die from medical error. But this is massive number of people in Canada who actually died this way. Thousands, not hundreds. Not a dozen. It’s horrific.”

Schadenberg believes these medical decisions explain why Canada had “such an incredibly high death rate amongst its seniors.” According to a report by the Canadian Institute for Health Information (CIHI), Canada has “the worst record for COVID-19 deaths in long-term care homes compared with other wealthy countries,” as CBC News noted.

Unfortunately, he added, criminal investigations in medicine are rare.

“The only reason they got the woman in Woodstock was because she confessed,” said Schadenberg in reference to serial killer nurse Elizabeth Wettlaufer.

Despite numerous studies supporting the use of Ivermectin and hydroxychloroquine as safe and effective treatments for COVID-19, numerous health authorities worldwide have said they shouldn’t be used.

One such recent study by the French Pasteur Institute states that standard doses of Ivermectin, which earned the 2015 Nobel Prize in Physiology or Medicine as a parasitic drug, “prevent[s] clinical deterioration” and “limit[s]” respiratory inflammation in lab experiments.

After Dr. Paul Marik and Dr. Pierre Kory gave a ringing endorsement for the “miraculous” drug before the National Institutes of Health (NIH) Treatment Guidelines Panel, Ivermectin was finally approved by the NIH for use to treat COVID-19 in the United States.

Two recent studies alone, one published by medRxiv, and one by the Henry Ford Health System, have shown that hydroxychloroquine helped severely ill coronavirus patients recover.

However, the World Health Organization’s official guidelines recommend that Ivermectin “only be used within clinical trials,” and the FDA also warns against the use of Ivermectin to treat COVID-19.

Dr. Joseph Varon, known as the “COVID Hunter,” reportedly has had much success treating COVID because of the use of Ivermectin and hydroxychloroquine. Ivory Hecker, a former reporter for a FOX affiliate, said the media is censoring any mention of his use of these treatments.