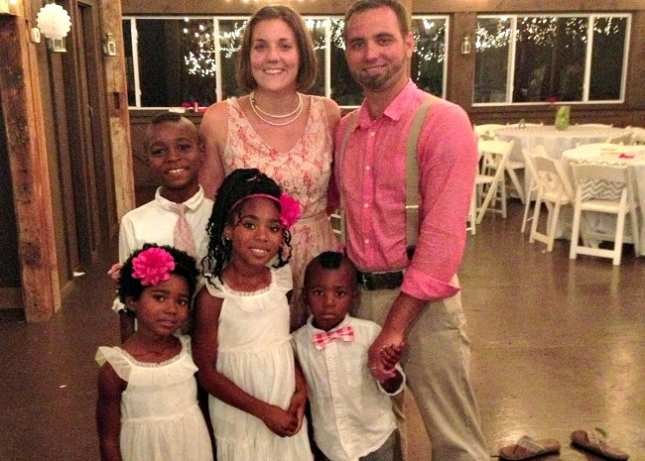 Oct. 2, 2013 (LifeSiteNews.com) – The Onufers knew they wanted to adopt. They'd known for a long time. What they didn't expect was to be given four children from a “high-risk” situation…all at once.

After visiting China and seeing children in extreme poverty, Ryan and Erica were both convinced that adoption was part of their calling as a couple.

“We wanted to adopt before having any biological children, so that our adopted children would feel 'chosen,' not as though they were an afterthought.”

As they approached their five-year anniversary, they contacted an adoption agency and began the stressful process of filling out paperwork and allowing the agency to conduct a home study. But after only two months, they felt led in a different direction. They had previously decided on both foreign and domestic adoption, but their hopes to adopt a child from Haiti were soon disappointed when Haiti closed its doors to outside adoptions. Erica then phoned a local foster care/adoption agency and soon after signed up for training classes.

“We decided on the first night that we wanted a sibling set of two, but that three would be our absolute maximum,” she told LifeSiteNews.

Five months after they began, and before their training was complete, the adoption agency left Erica a voicemail message.

“We know you're not finished your training and aren't to be placed for close to a year, but we feel like these children are a perfect fit for your family. There are four children.”

The message went on to say that the children were ages 1, 2, 3 and 6 and that there were special needs involved. It was an emergency placement. A high-risk case.

“I immediately felt like I needed to say yes,” Erica told us, “but I was worried my husband wouldn't feel the same. We owned a pickup truck and a sports car. We lived in a small house. We had nothing we needed for four young kids. Much less special needs kids.”

Ryan didn't hesitate. “I know these are our kids. I know we need to say yes. God is going to figure out the how!”

All four were in diapers and pull-ups. Three were unable to talk and one simply refused. The youngest, a boy of 12 months, had a fractured skull and was scarcely able to crawl. He had been found lying at the bottom of the concrete steps of the apartment where his birth mother lived. The two girls, aged two and three, had been found at a grocery store blocks from their home, eating food they had stolen.

Within the next two hours, the agency completed its evaluation and home study with Erica, while Ryan chased all four children around the house, caring for them until they finally slept, at nearly two o'clock in the morning.

The next days were spent on several doctor's visits for evaluations, attending to the youngest's head injury, treating malnourishment and a bleeding diaper rash in the youngest girl, trips to the salon to remove bugs, knots and dreadlocks from hair, and buying a van. They also made several trips to purchase new clothing, shoes and bedding, much to the excitement of all four children.

Erica and Ryan knew that in just three months, the court would decide if the children would be returned to their birth mother.

“We prayed for her every day, knowing that God would help us to say good-bye. That we would be ok when they left us,” Erica said, “all the while, my husband kept saying, 'These are our children. They're not going home. Trust me.'”

Just two months later Erica received a phone call. It was a county worker she had never spoken to. An unexpected court hearing had taken place and parental rights had been terminated.

“Just like that. I called my husband and we were speechless, celebrating their new chance at life but also mourning for their birth mother. Praying that God would give her peace.”

“And full of more joy than I ever thought possible.”

Their youngest walked into Ryan's arms on night three, spoke at 18 months and was potty trained before age two, and today is happy and healthy. Their youngest daughter called Erica 'Mommy' on day two and within three short weeks was healthy and properly nourished, attaching easily. Their eldest daughter, diagnosed on the Autism spectrum, received an award for being the kindest in her kindergarten class, and finished kindergarten on a near second grade level.

And their eldest, who had suffered severe abuse, been in four foster homes and passed to seven different families, and was already familiar with weapons and gangs, is “doing his best every day to be a man of God.”

“We will never underestimate the great gifts we have been given. We are so blessed. The spirit of adoption is so beautiful and we feel so grateful to love and care for our 'chosen' children, just as our Father cares for us.”

A common argument in favor of legal abortion goes like this: “So many 'unwanted' children are beaten, abused, or neglected by their parents. Or they end up in foster care where the same or worse happens. Is that what you want? Wouldn't it be better if the child had just never been born?”

The Onufers stand as a living rebuke to this argument. Not one of us can ever know the life that a child will have, no matter the circumstances into which he or she is born.

Miracles can, and do happen, every day. No child is “unwanted.”