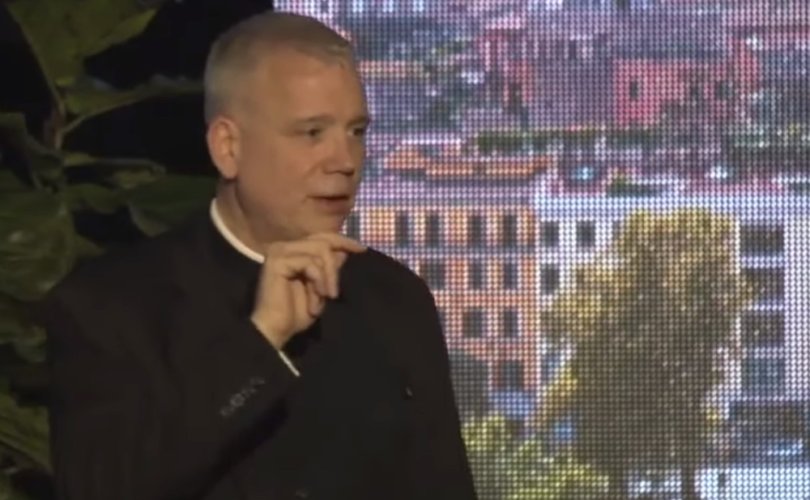 April 4, 2019, 2:20 PM update: Bishop Lawrence T. Persico responded to LifeSiteNews' request for comment regarding Fr. Richards' remarks about him. The bishop's remarks are now included in this report.

ERIE, Pennsylvania, April 3, 2019 (LifeSiteNews) ― Celebrity priest Father Larry Richards warned his congregation during a Sunday homily that he knows who has issued complaints against him to the local bishop because “the bishop called me and told me your names,” adding that the complainers “endanger” their “eternal salvation.”

The acclaimed retreat director and author of Be a Man used his homily this Sunday to upbraid parishioners who had written to their bishop with concerns about Richards’ recent spat with the Church Militant media organization.

“I want to share something with you … because some of you need to be reconciled,” said Richards during his taped nine-minute sermon.

“Some of you wrote letters to the bishop for me, and the bishop called me and told me your names. I know who you are. But the reality is you endanger your eternal salvation.”

LifeSiteNews reached out to both Father Richards and the Diocese of Erie, Pennsylvania for comment. Fr. Richards did not reply.

A spokesperson for the diocese said via email that she would be “surprised” if Bishop Lawrence Persico “would be willing to discuss the contents of a personal conversation he had with one of our priests, no matter what the topic.” Bishop Persico, however, responded to LifeSiteNews April 4, after the publication of this report, detailing how he handles complaints about priests.

“When I receive a complaint concerning a priest, my practice is to begin by asking the person to try to resolve the situation locally, by speaking directly with the priest,” the bishop told LifeSiteNews by email.

“I usually inform the priest of the complaint, and encourage him to resolve it with the complainant in a pastoral way,” he continued. “If the complaint comes in written form, ordinarily I respond to the writer and copy the priest, so both people involved are prepared to have a fruitful conversation,” he added.

Richards had been preaching about the Prodigal Son and his resentful older brother, when the priest suddenly addressed the scandal that ensued after revelations he publicly accused Church Militant of having sent him death threats. Christine Niles and Michael Voris of Church Militant strongly denied the allegations, and Richards amended his story, saying that the threat had come from a follower of the Catholic news apostolate.

In his homily, however, Richards indicated that he believed the trouble has been caused by his unconditional fidelity to Pope Francis.

Richards suggested that some Catholics “hate” Pope Francis because he reaches out to sinners.

“… Jesus sat there and ate and drank with sinners. And it was offensive to the really holy people. It was offensive to them. And often that’s us.  You know, that’s why people hate Pope Francis. Because he talks about, ‘we have to reach out to sinners’ and the righteous ones sit back and …  they do all these things.”

The priest stressed that those parishioners who question Pope Francis need to be reconciled to God and repent just as much as the “other ones.”  He then read his congregation two short  quotes from the First Vatican Council’s document Pastor Aeternus to argue that they will go to hell if they “go against the Pope.”

Pastor Aeternus, however, does not hold the Pope superior to the perennial doctrine of the Church, or suggest that he can never make a mistake or never be lovingly corrected. Chapter 3, Article 1, from which Richards took his first citation, merely restates the teaching of the Council of Florence that the Roman Pontiff is the “Supreme Shepherd”, the earthly leader of all the bishops and the entire Christian Church.

“This is the teaching of the Catholic truth, and no one can depart from it without endangering his faith and salvation,” Richards read from Article 4 before giving his own understanding of the text:

Pope Francis has excited much concern among many Catholics, including cardinals, for what seems at times to be departures from the perennial teaching of the Roman Catholic Church.

In April 2016, the pontiff plunged the Church into confusion with the promulgation of his post-synodal apostolic exhortation Amoris laetitia. It led to the issuance in September 2016 of Dubia (formal questions) from four Cardinals concerning the implications of the document for doctrine. That December, 23 leading Catholic scholars wrote the Dubia Cardinals a letter of gratitude for their quest for “moral clarification.”

In July 2017, a “Filial Correction” was signed by over 60 Catholic scholars, including theologians, and presented to Francis  “on account of the propagation of heresies effected by the apostolic exhortation Amoris laetitia and by other words, deeds and omissions of [his] Holiness.”

In a recent interview with LifeSiteNews, Bishop Athanasius Schneider of Kazakhstan stated his opinion that while even a heretical reigning pope could never be formally judged or deposed, he could certainly be corrected.

“There is a subtle but crucial difference between a correction — a fraternal correction — even in a public form, and the act of an investigating judge and who pronounces a verdict,” Schneider said.