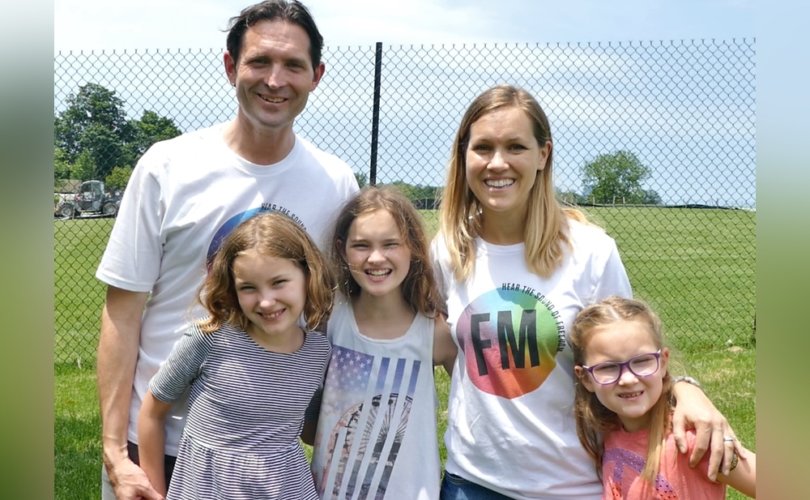 WASHINGTON,  D.C., May 27, 2019, (LifeSiteNews) — Sixteen years ago, Brian Wheelock was fully immersed in the homosexual lifestyle of pornography, lust, and self-gratification. Despite being convinced that he was “born this way” and that his identity was as a “gay man,” he sensed deep down inside that he was unhappy and that he had been created for something more.

“To me it was empty, and a place of depression for me where I just wasn't fulfilled,” Wheelock told a crowd of ex-homosexual and ex-transgender men and women at the Second Annual ‘Freedom March’ in Washington D.C. on the weekend.

That's when he made a promise to God that changed his life forever.

“Leaving homosexuality was not easy,” Wheelock told LifeSiteNews.  “Leaving a life of sexual sin, pornography and lust and self-gratification was even more difficult. But I knew the Lord was showing me that the life I was living was not his best for me.  He had more. Much more. But how could I leave a lifestyle that had become my identity?”

“When I first sensed the ‘nudge’ from above I was living in London right after college and working on a British TV show,” said Wheelock.  “My time overseas is when I pursued my homosexual identity more than I ever had before. I felt the freedom to be more open about it since I was far from home and began dating —and hooking up with— more and more guys and was quite a regular at the gay bars and clubs around town.”

Wheelock cited a journal entry he wrote at the time, and which he only recently rediscovered:

Just went home with a guy I know from work and hooked up. I can’t believe I did that. This has to be the last time – I am so done with this life. Though my feelings are real- I just don’t think I’ll be happy 20-30 years down the road living with some guy. Somehow it just doesn’t seem right.

Last night I had a dream- a vision from God.  I dreamt that I got married (to a girl!) who has a medium build with long brown hair.  She was beautiful.  Together we had 3 or 4 kids…it was hard to tell.  But I could clearly see the oldest.  A girl- a beautiful girl- with long brown hair.  She was twirling and spinning with flowers in her hair and the biggest smile on her face.

Although Wheelock wrote this before he became a believer in Jesus Christ, the dream would later prove to be prophetic.

“The moment my plane touched down back in the states, I just knew I had to get to church,” continued Wheelock.  “I found a solid one and began attending regularly. I could sense the Lord speaking to me directly through His word and through the solid Biblical teaching of that church.  And I knew the Lord was showing me that homosexuality was not His plan for me.”

“Over the next several months the Lord showed me how he died for my sins and paid the price for them on the cross,” said Wheelock.  “I began to pray specifically about what to do about my homosexual feelings and identity with that lifestyle.”

“What happened next truly changed my life. The Lord lead me to write out a written covenant between Him and me,” explained Wheelock.  “I used the best paper I could find. In my own hand I wrote out a promise to Jesus directly that I would seek him with all my heart.  I wrote a promise that I would purge my house and life of all things related to that lifestyle.  I promised to glorify God with my life and to live the life He had for me.”

Knowing he would continue to be tempted by same-sex attraction, Wheelock made a specific plan, including:

Wheelock did an extraordinary thing:  He read his covenant out loud twice each day—first thing in the morning and then before bed at night—and he also signed and dated it day after day, signaling his commitment.

Wheelock now keeps that written covenant in a protective plastic sheathing, along with those hundreds of daily signatures.

“The Lord did something beyond my comprehension,” said Wheelock.  “He set me free from my life of lust and sin and gave me a life of love and trust in Him.

“It wasn’t easy. In fact, it was really really hard,” he continued, “But being this committed to following the path Jesus had for me allowed me to find who I was in Christ.

“People sometimes ask me ‘so praying this prayer made you straight?’” said Wheelock.  “Great question. No. Praying this prayer allowed me to find Jesus and fully focus on him and what He had planned for me. It would take a few more years of staying close to Jesus that He would finally allow me to meet the girl of my dreams, my soul mate, Pam.”

After seven months of dating Pam, Wheelock felt it was time to share his story about having lived as an active homosexual male.

“I dreaded that day so much, it made me sick,” he recalled.  “What would she say?  Could she handle the fact that I used to consider myself gay?

“I’ll never forget the day,” said Wheelock.  “I brought her to the beach and sat her down. ‘There is something I have to tell you.’  Finally, I blurted it out.  There it was done. I could hardly look in her eyes. Would she slap me, or maybe run away? Or just break things off? The moment of silence seemed like an eternity.”

“Wow,” said Pam. “I’m sorry that you went through all of that.  It must have been so difficult.”

Wheelock said he just sat there, bracing himself, waiting for the other shoe to drop.  But Pam’s response shocked him.

“You want to go get some ice cream?” she said with a smile.

“You mean you don’t want to leave me?  Smack me?  Run away?” asked Wheelock.

“No sweetie, I don’t,” said Pam. “I see the Godly man that you are now and that’s who I care about.  I mean, I may have some questions for you down the road, but I have a past too, it’s not the same as yours, but we are all sinners.”

Wheelock said he was speechless.

“So are we gonna get some ice cream or what?” Pam asked again.

“I look at my girls and sometimes cry,” said Wheelock.  “If I didn’t yield myself to the Lord and follow His lead, these little munchkins wouldn’t even exist! It overwhelms me to think that an entire generation—my kids, their kids and onward—wouldn’t have even been possible if I didn’t embrace the plan that Jesus was showing me.

“If somebody in their school tells them that change isn’t possible, then they can say, ‘Well I saw all of these people and they were all changed by the love of Christ,’” said Pam.

“‘So you can’t say it’s not possible,’ she added. “ They’ve witnessed it with their own eyes.”