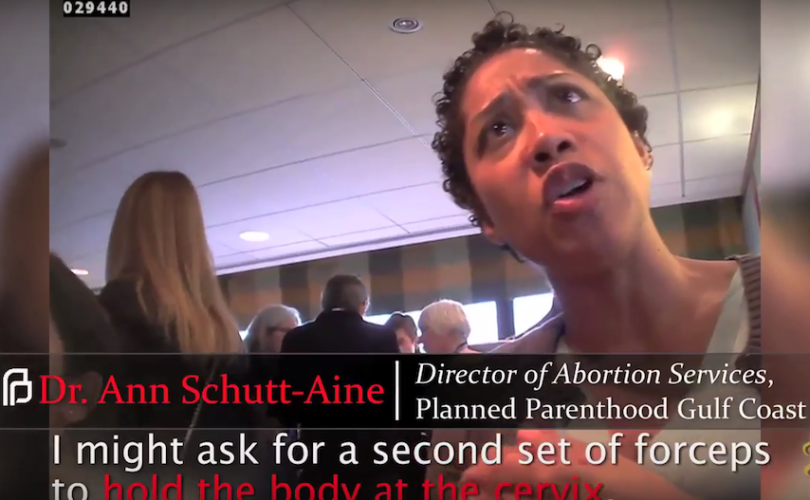 Claire
Chretien
Claire Chretien
May 25, 2017 (LifeSiteNews) – The Center for Medical Progress (CMP) has released video footage from the National Abortion Federation (NAF) conference during which abortionists admit the work they do is “killing,” complain about how “difficult” it is to tear apart a fetus, and lament that they’re not given a place to discuss the “heads that get stuck that we can’t get out.”

A judge’s gag order prevented this footage from being released for over a year. NAF took CMP to court over the footage. Some of this footage was previously leaked by Got News, but this is the first time CMP has publicly released it with subtitles.

CMP leader David Daleiden faced arraignment on May 3 for 15 felonies the California Attorney General is charging him with.

“Every video recording for which the Attorney General is charging David was obviously and unquestionably made in a public place where it could not possibly be considered 'confidential,'” said Ferreira. “The only difference between David’s conduct and that of undercover video journalists every day in the state of California is the fact that he recorded the political backers of the state’s top prosecutor.”

The video is a compilation of extremely candid comments abortionists and Planned Parenthood executives made about decapitating babies and selling their livers, heads, and limbs.

“An eyeball … fell down into my lap, and that is gross!” exclaimed Dr. Uta Landy, the founder of Planned Parenthood’s Consortium of Abortion Providers (CAPS). Landy was a speaker at the NAF conference. The audience laughed.

Dr. Lisa Harris, the Medical Director of Planned Parenthood of Michigan, noted, “Our stories don’t really have a place in a lot of pro-choice discourse and rhetoric, right?”

“The heads that get stuck that we can’t get out. The hemorrhages that we manage. You know, those are all parts of our experience,” she said. “But, there’s no real good place for us to share those.”

Harris suggested granting pro-lifers many of the arguments they make in opposition to abortion.

“You go in there, and you go, 'Am I getting the uterus or the fetus?' Oh good fetus. Ugh! What have I got? Nothing? Let’s try again,” explained Robinson.

Dr. Deborah Nucatola, who appeared in one of CMP’s first videos discussing altering abortion methods to obtain better fetal body parts to sell, describes in this video how she beheads babies so their skulls and brains can be sold.

“You know, sometimes she’ll [fetal parts buyer] tell me she wants a brain, and we’ll, you know, leave the calvarium in ’til last, and then try to basically take it, or actually, you know, catch everything, and keep it separate from the rest of the tissue so it doesn’t get lost,” said Nucatola.

The video highlights an audio recording of Talcott Camp, the Deputy Director of the ACLU Reproductive Health Freedom Project, talking about how she understands that broken fetal skulls are “really sharp.”

“When the skull is broken, that’s really sharp! I get it! I understand why people are talking about getting that skull out, that calvarium,” she said.

“The truth is that some [clinics] might want to do it [sell fetal tissue] … to increase their revenues,” said Deb VanDerhei, National Director of Planned Parenthood’s CAPS. “And we can’t stop them.”

Dr. Ann Schutt-Aine, the director of abortion services at Planned Parenthood Gulf Coast, explained to CMP that she’s often about to commit what would be considered a partial-birth abortion, so she yanks off one of two of the baby’s legs to prevent it from being classified as such.

A partial-birth abortion occurs when an abortionist delivers all of a live baby’s body except his head. The abortionist inserts scissors into the base of the baby’s skull, vacuums his brains out, and then removes the rest of the body. The partial-birth abortion procedure is illegal and the law designating it as such was upheld in the Supreme Court case Gonzales v. Carhart in 2007. Other methods of late-term abortion are still legal.

“If I’m doing a procedure, and I’m seeing that I’m in fear that it’s about to come to the umbilicus [navel], I might ask for a second set of forceps to hold the body at the cervix,” said Schutt-Aine. Then, she’ll “pull off a leg, or two, so it’s not PBA [partial-birth abortion].”

“There’s a lot of clinics that we work with that, I mean it helps them out significantly,” an unidentified StemExpress employee told CMP. StemExpress is one of the fetal tissue companies that CMP’s videos implicated.

The director of abortion services at Planned Parenthood of New York City, Dr. Stacy De Lin, said the abortion facilities with which she’s affiliated “certainly do intact D&Es.” A “D&E” is a dilation and evacuation abortion, also known as a dismemberment abortion. It's not standard for babies to be delivered “intact” during such a procedure.

The testimony of Dr. Anthony Levatino, a former abortionist who committed over 1,200 abortions, indicates that a baby's skull must be broken and its arms and legs usually individually removed during a D&E abortion.

A “grasping instrument” is inserted “into the uterus to grasp larger pieces of tissue,” a sanitized description of the D&E procedure says on WebMD.com.

A D&E abortion involves twisting a baby apart and pulling its body parts out, Levatino explains in an video on AbortionProcedures.com.

AbortionProcedures.com explains that during such an abortion, “the abortionist uses a sopher clamp — a grasping instrument with rows of sharp 'teeth' — to grasp and pull the baby’s arms and legs, tearing the limbs from the child’s body. The abortionist continues to grasp intestines, spine, heart, lungs, and any other limbs or body parts.”

De Lin told CMP investigators that the “financial incentive” they were offering abortion facilities for baby body parts will make “the people we have to get this approved” by “very happy.”

Originally, the people accusing Daleiden and his co-worker Sandra Merritt of the 15 felonies weren't named, but rather were listed as anonymous “Does.”

“The First Amendment must apply equally whether you are pro-choice or pro-life,” said Ferreira, who wrote and filed the demurrer, “and a publicly-accused defendant is entitled to face his accusers in a public trial. Anything less is a corrupt attempt by the Attorney General to orchestrate a star-chamber proceeding reminiscent of the witch hunts and show trials of more unenlightened eras.”

“The Attorney General sent SCA a password-protected list of Does 1 through 14, stating that the names were somehow confidential, rather than amending the publicly filed complaint to publicly list David’s accusers,” the group explained in a press release. “There is no protective order in place in state court that would protect the names of the Does, and David is entitled to a public defense.”

The video-recordings related to interviews with these people are here.