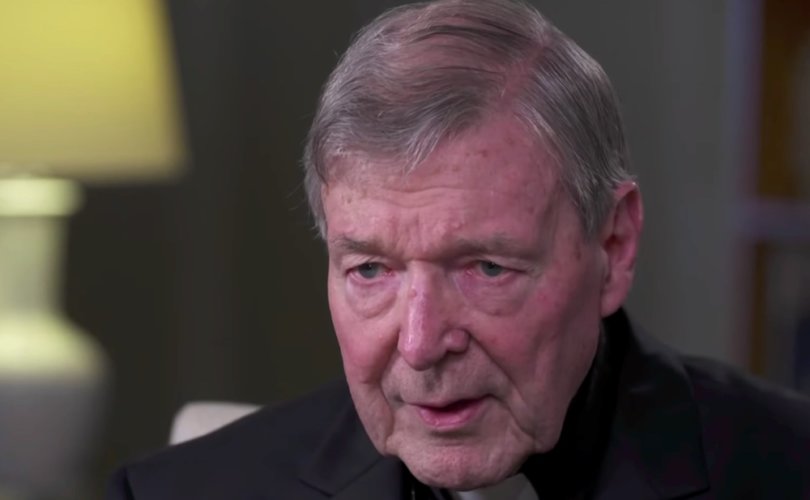 AUSTRALIA, April 14, 2020 (LifeSiteNews) – Cardinal George Pell says that he “never felt forsaken” during his more than 13 months in prison, saying that he received “something like 4,000 letters.”

Pell made the comment during his first TV interview following his release from prison last week, after being acquitted of his convictions of historic child sexual abuse by a unanimous decision from seven justices of the Australian High Court.

He spoke to Sky News Australia's Andrew Bolt, who has long defended Pell’s innocence, despite much of the Australian media’s hostility to the Cardinal.

Pell told Bolt that his lowest moment in the past year came when the Victorian Court of Appeal upheld his initial conviction. The Sky News Australia reporter summed up the injustices of recent years, before asking Pell what his lowest point had been.

BOLT: You were accused and jailed for the most horrific of crimes: raping two boys. You were vilified: crowds screamed at your face. You lost your job, your savings, your career, your reputation, spent four hundred and five days in jail for a crime you didn't commit – what was your lowest moment?

PELL: I think the lowest moment was after the decision of the Victorian appeal court. I never believed there was a remotest possibility that a couple of judges would not uphold my appeal.

But when asked if he had ever felt forsaken, Pell replied:

Upon his release last week, Pell acknowledged his gratitude for the prayers offered for him by others. He repeated that gratitude during his interview with Bolt in a longer reflection on the role prayer played in his time in prison.

“I was cleared. And, I mean, there are thousands, if not more, people all over the world praying for me. And, I seriously believe that one reason that I coped so well with the adversity was the prayers of all these people,” he said.

Pell also told Bolt that a lot of “very good Christians and Catholics who weren't wealthy people” helped to finance his legal costs, which are thought to have run into the millions. The acquitted cardinal also acknowledged the contributions of some “very generous…wealthy people” and said that he had used some of his own retirement savings to fight the charges in court.

Asked by Bolt if the Church had financially contributed at all, Pell replied, “not a thing.”

Pell described his surprise at the decision of the Victorian Court of Appeal to uphold his original conviction, given the scanty and improbable evidence against him.

“Overwhelmingly, the opinion after the appeal, amongst people who weren't my supporters, was that we won hands down. One of my leading opponents in the press said that the prosecution case was a disaster,” he said.

Pell said that he actually “felt sorry” for his prosecutor “because he has no cards, and he was a capable honest man and so he didn't have much room to move.”

The Cardinal said that he thought during his first unsuccessful appeal that “the onus of proof was reversed.”

“I’m no lawyer, but I was always clear in my own mind that if somebody says such and such as possible, that's on quite a different level from establishing that something is factually probable, or factually happened. And we weren't there to prove that it was impossible – [but] actually I believe it was on the evidence of the complainant and of the others. But the decision’s a mystery, and I think the High Court dealt with it well.”

Pell, who in 2017 was the third most senior cleric in the Catholic Church while serving as Vatican’s Secretariat for Economy, said that while in prison he followed the advice he himself has given to priests over the years for coping in difficult situations.

“I followed the advice I've often given to priests when they're in a bit of trouble. ‘Keep up your prayers; get out of bed at a good time; eat properly; exercise every day and try to sleep at night,” he explained.

During the interview, Pell also told Bolt that senior people in Rome believe his conviction and imprisonment in Australia was related to the trouble he was causing to “corrupt officials in the Vatican” as he led the financial reforms.