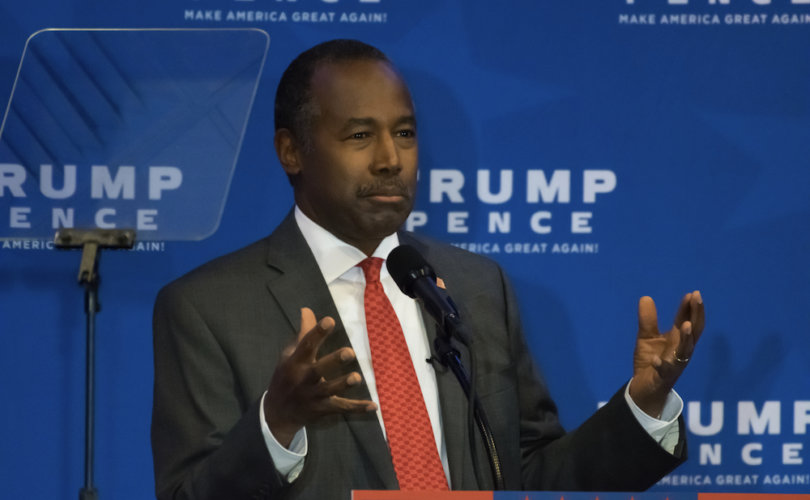 WASHINGTON D.C., January 31, 2018 (LifeSiteNews) – President Trump's Housing and Urban Development (HUD) Secretary Ben Carson said he will not be “intimidated…into relinquishing my spirituality or religious beliefs” by an atheist group which is in the process of suing Carson for alleged discrimination.

Unhappy about continuing reports of Trump Cabinet members holding weekly Bible studies, The Freedom From Religion Foundation (FFRF) had earlier filed Freedom of Information Act (FOIA) requests to determine if government resources were being used to conduct the Bible studies.

When Carson’s department refused to waive standard fees for the request, FFRF chose to sue HUD and Secretary Carson.  FFRF was joined in the suit by Citizens for Responsibility and Ethics in Washington (CREW). The suit alleges that Carson’s department refused to waive the fees because any uncovered documents “are likely to cast the agency or HUD Secretary Ben Carson in a negative light.”

The atheist group is “fearful that a hot beverage or a bagel may be consumed at the expense of taxpayers or that staff may be coerced to participate in religious activities against their will,” he wrote.

“First of all, taxpayer funds are not used to support the ministry, and secondly, no staff are involved in the Bible study,” he continued.

“More importantly, I refuse to be intimidated by anti-religious groups into relinquishing my spirituality or religious beliefs,” he added.

Carson wrote that one of the principles of “our nation‘s founding is freedom of religion.”

“I will not stop being a Christian while in service to this country, in fact, it is my faith that helps me serve the nation even better. The relentless attacks on the spirituality of our nation must be resisted. We are not like everyone else, which is precisely the reason that we rose so rapidly from obscurity to become the most powerful and free nation in history,” he wrote.

The secretary said that “patriotism, our morality, and our spirituality” are “currently under severe attack” by such suits.

Vice President Mike Pence, who described himself during the 2016 campaign as “a Christian, a conservative, and a Republican, in that order,” is present for the Bible study as often as his travel schedule allows.

While Bible studies among Washington politicians or officials are not unheard of, the weekly Bible study is purported to be the first regular cabinet-level study in some 100-plus years, according to organizer Ralph Drollinger, president and founder of Capitol Ministries.