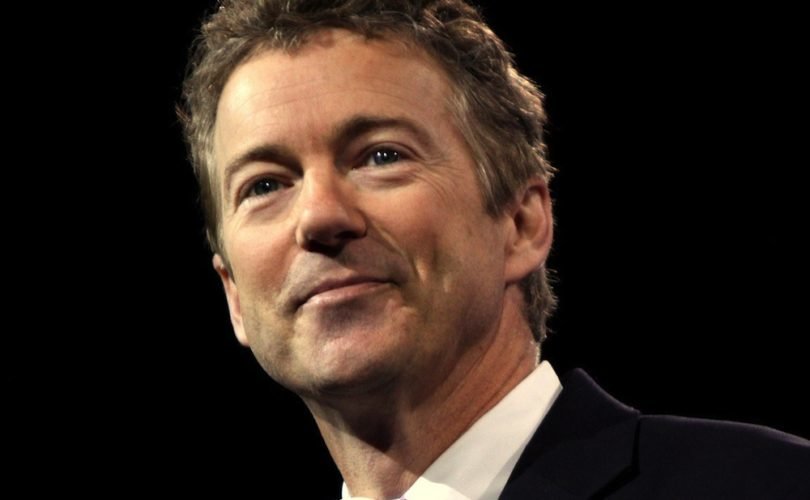 ASHLAND, KY, September 3, 2015 (LifeSiteNews) – Rowan County Clerk Kim Davis has been arrested and taken to jail for refusing to issue marriage licenses to same-sex couples this afternoon. After repeatedly refusing to give such a license to gays and lesbians, a federal judge found her in contempt of court and sentenced her to jail time rather than assessing a fine.

As she was escorted out of the courtroom to jail, homosexuals began chanting, “Love won! Love won!”

As the scene played out, her U.S. senator, Republican presidential hopeful Rand Paul, said the decision was unwarranted, violated religious liberty, and would further polarize the country on the issue of same-sex “marriage.”

“I think it's absurd to put someone in jail for exercising their religious liberty,” Sen. Paul, R-KY, told CNN. “If you want to convince people that same-sex 'marriage' is something that's acceptable I would say try to persuade people” instead of using state force.

He also warned such heavy-handed tactics would backfire on LGBT activists. “If we're going to use the federal government, and we're going to get involved in every state and locality, you know what's going to happen? It's going to harden people's resolve on this issue,” Paul added. “There's going to be no open-mindedness on this.”

“I think it's a real mistake to be doing this,” he said.

He said if state force continued to be exerted against Christian believers, “I think what's going to happen as a result of this is states and localities are just going to opt out of the marriage business completely.”

“The court cannot condone the willful disobedience of its lawfully issued order,” Judge Bunning said in issuing the arrest order. “If you give people the opportunity to choose which orders they follow, that's what potentially causes problems.”

Bunning ordered Davis imprisoned, rather than imposing a fine, because he said her fellow believers would take up a collection and pay her fine.

Similar tactics were applied when Christians who refused to participate in same-sex “marriages” tried to raise funds via crowdfunding platforms.

Paul's rivals for the 2016 Republican nomination – Mike Huckabee, Bobby Jindal, and Marco Rubio – have also voiced their support for the now-incarcerated Davis.

“We should seek a balance between government's responsibility to abide by the laws of our republic and allowing people to stand by their religious convictions,” Rubio said yesterday. “There should be a way to protect the religious freedom and conscience rights of individuals working in the office.”

But her opponents say they demand nothing unreasonable of her. ACLU attorney Heather Weaver said, “Its not making someone a martyr to ask someone to do their job and follow the law.”

Republican presidential candidates Chris Christie, Lindsey Graham, and Carly Fiorina have agreed that clerks who have deeply held religious beliefs must enforce the law. Christie underscored his resistance to finding any accommodation for public officials.

The prospect of jail does not frighten Davis, a born again Christian, who says iron bars cannot separate her from the Savior Who dwells in her heart, nor does prison compare to the punishment that she believes awaits should she participate in legitimizing sin.

“I've weighed the cost and I'm prepared to go to jail,” Davis told Fox News yesterday. “This is a Heaven-or-Hell issue for me and for every other Christian that believes. This is a fight worth fighting.”