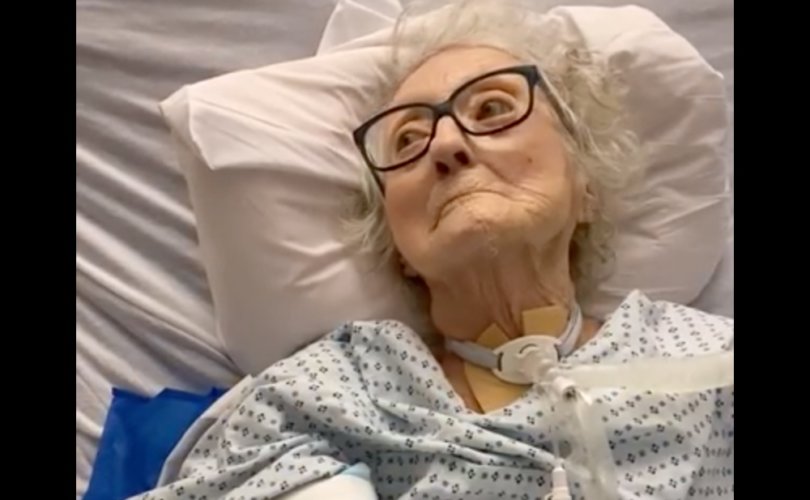 NEW YORK, January 7, 2020 (LifeSiteNews) – A conscious and alert 91-year-old woman’s life hangs in the balance as she fights for her right to live by remaining on life support after having her leg amputated in a US hospital.

The battle for Arline’s life or death is apparently the result of a dispute involving her two sons, over their mother’s (Arline) future care.

The mother’s fate is now being decided in a county court in New York. Arline’s feeding tube and ventilator could be removed, resulting in her death by starvation

The mother, who was a public school teacher in Brooklyn for 25 years, was recently evaluated as mentally capable of making her own decisions – to update her living will, which reflects her desire to live.

The son who is trying to help his mother and honor her will to live, Ed Lester, has also stated his intention to care for his mother once she starts to recover her strength.

It should also be noted that the video, in which Arline says she wants to live, was taken by her son Ed, to coincide with the approval of her new living will. The video was captured Nov. 7, 2019.

Yesterday, a Nassau County (NY) Court Judge, Julianne Capetola, started hearing the case which could have two possible results: either Arline will be allowed to recover with proper medical treatment being given; or, Arline’s feeding tube and ventilator could be removed, resulting in her death by starvation.

Judge Capetola also issued a gag order, yesterday, preventing those involved with the case from speaking to the media.

A petition asking the courts to respect Arline’s right to life has been started by LifePetitions and the Personhood Alliance.

A crowdfunding page has been set-up to help Arline’s legal defense raise a war chest to defend her right to life.

CLICK HERE to donate to help Arline’s lawyers as they fight for her.