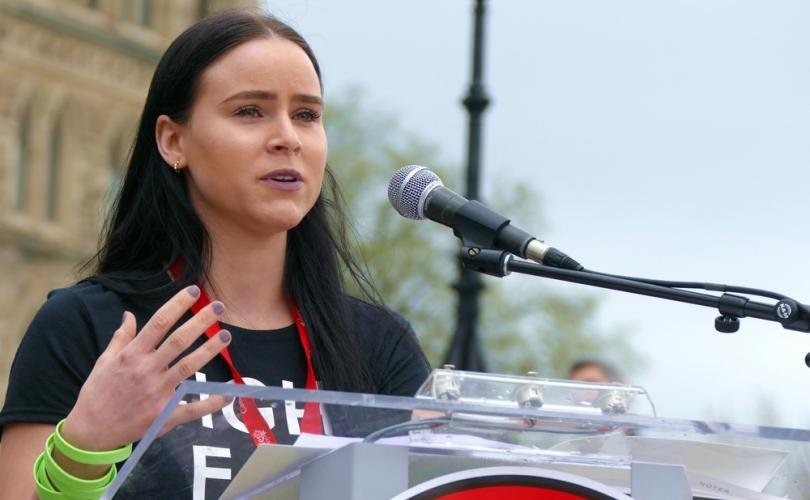 Felicia Simard addresses the National March for Life in Ottawa, May 10, 2018.

OTTAWA, Canada, May 11, 2018 (LifeSiteNews) – “Heroism doesn’t look the same to everyone,” a young woman told a crowd of thousands at the National March for Life in Ottawa on May 10. “Grit, boldness, audacity, and a fierce spirit – these are not the words I would have defined myself with before the birth of my very tiny human,” she said, clearly choking back strong emotions.

“I was the epitome of everything society told me would define me — rebellious, self-mutilating — I was against myself and society,” she said.  “I was a severe functioning alcoholic, addicted to cocaine and prescription pills.”

“To make matters worse, I was homeless,” she added.

Felicia Simard of CHOICE42 — pronounced “Choice for two” — told of her unlikely, unexpected discovery of inward strength which allowed her to choose life instead of an abortion for the child in her womb in the midst of an erratic, traumatic life.

“I found out that life was being sustained inside of me,” she said, while at that moment, “sustaining life for myself seemed unimaginable, far off.  I thought, ‘I can’t bear a child into my circumstances.’”

But that’s when the heroic grit, boldness, and audacity kicked in from within.

“So my heroism looked more like this:  Saying ‘Yes’ to a little life, even though I had no idea what it was going to look like, or how.”

“‘Grit’ looked like checking myself into a not-so local place of refuge at Wings Maternity Home, taking priority over 35 other girls on a waiting list,” said Simard.

“‘Boldness’ was kicking habits I’ve had since the undeveloped age of eleven:  Excessive drinking, smoking cigarettes, and mixtures of my choice of mixtures and poisons.”

“‘Audacity’ was looking in a mirror and finally facing––me, and childhood post-traumatic stress disorders.  I had a lot of those:  Crack baby, incest survivor, family shot at, landing us in the witness protection program, and abusive relationships that left me handcuffed to a mother’s basement banister.  Trauma was my ‘normal.’  And how dare anyone come and judge my normal.  Right?”

“But a fierce spirit — Jesus — chased me down to give me a life when I thought I would be doing my child a great service by giving them a death sentence they did not ask for,” said Simard.  “But God made something out of nothing.”

“And so, to any woman out there facing an unplanned pregnancy, I encourage you to make a choice you both can live with,” said the now beaming, joyous, confidant Simard.

“You are not a statistic on the rise, or who society says you will become,” she said.  “You are strong enough to choose life.”

Simard concluded by encouraging those looking for help to “visit www.choice42.com to find support in your area.”

CHOICE42 is a Canadian grassroots pro-life organization.  It is “pro-woman, pro-baby, and pro-life.”

The organization seeks “to create awareness about the humanity of pre-born children, and to provide support to women who are facing unplanned pregnancy or dealing with post-abortion problems,” according to its website, which “includes Canada’s largest nationwide database of pregnancy help resources.”

“CHOICE42 encourages women to be fully educated about their options and to realize that though it is their choice, they are making a choice for two.”

The March for Life is organized by Campaign Life Coalition, and marks May 14, 1969, the day Prime Minister Pierre Elliott Trudeau’s Liberal government passed the omnibus bill legalizing abortion. The theme for this year's annual march was “Pro-Life.ALL.IN.”