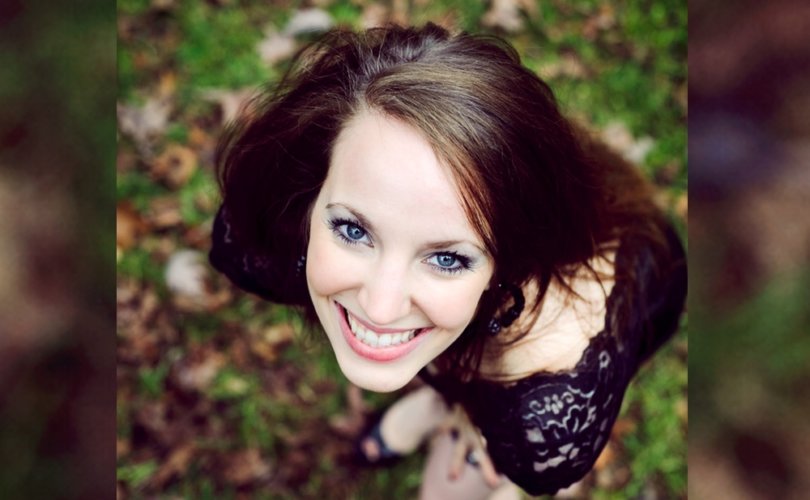 March 28, 2017 (LifeSiteNews) — I had always dreamed as a little girl of Prince Charming, castles, and fairytale endings. But what took place exactly one week before my birthday in September 2009 was no childhood dream, but an evil nightmare filled with pain and utter disbelief.

When I was violently raped by my fiancé, my dreams were dashed. My world came crashing down. That violent act shattered my very core.

I’m often asked when sharing my story how a fiancé could be guilty of rape.

What some people fail to understand is that when a girl says “No,” she means “No,” regardless of whether or not there is an intimate/sexual relationship. Yes, we were engaged, but this does not mean we were having sex. In fact, we weren’t. We had decided as followers of Jesus Christ that we would wait until we got married to have sex.

My fiancé had even said, “It will be difficult to wait, but it will be worth the wait!” I had no idea that the man who vowed to always protect me was capable of hurting me so much. How could the man who planned a future with me, who prayed with me every night for our future children, and who read and quoted scriptures to me be the same man who could cause me such harm?

It was through this situation that I had a true understanding of the meaning behind the phrase “a wolf in sheep’s clothing.” Not only had my body been violated, but also my heart had been betrayed.

I had been visiting him out of state. There was no family around. After he violated me, I called my sister and asked her what to do. I was in pain. She suggested I go to a hospital for urgent care, though I was still very much in denial with all that had just happened. My fiancé’s actions were, for the first time, the opposite of his words, and it was a lot to process.

After I relayed every harrowing detail of the traumatic event to the urgent care doctor, he sat on his spinning chair in front of me and told me by law he had to report it to authorities. He gave me the choice to make the call to the police and turn in my own fiancé for rape, or else he would.

All I could do was cry. I couldn’t believe this was happening.

The doctor said he would make the call and would come back once the police arrived. Meanwhile, my family and friends were hundreds of miles away as I sat by myself in the urgent care room, wondering how my happily ever after had turned so dark and violent. This was not at all how I expected to spend my weekend: Raped, then in urgent care with a doctor turning my fiancé in for rape, then having the rape kit (to collect evidence of sexual assault) performed on me as the police searched for my now ex-fiancé.

It was a woman’s worst nightmare. I went from being blissfully in love to feeling like the most unloved and alone woman in the world.

Most are unaware of the logistics of what a rape kit involves. It is horrifying to have it performed, but it is made even worse when you are so scared and facing so many unknowns. I found myself lying down in that hospital room as the Sexual Assault Response Team (SART) nurse performed the rape kit on me, all while a SART nurse-in-training looked on.

How did I get here? I was terrified and an emotional wreck. I couldn’t help but sob and feel so utterly alone, as my future now looked so bleak.

Now, I’ve been pro-life all my life. As the painful rape kit was performed on me, one thought that went through my mind was that I finally understood why some rape victims would be tempted to have an abortion. And that thought deeply disturbed me because of the strong pro-life beliefs I have always stood for. Yet, I could not bear the thought of becoming pregnant with the child of my rapist.

Just then the nurse asked me, “Do you think you could be pregnant?”

Her question made me want to crawl out of my skin and scream. The nurse discussed with me the timing of everything and determined that I was likely pregnant.

She then told me she was going to give me the “Morning-After” pill. I lay there crying, pleading with God to let me somehow die or escape this nightmare.

I knew the purpose of the Morning-After abortion pill was to terminate a pregnancy, to destroy the life of another human being. There are three ways the Morning-After Pill operates: 1) If a woman has not yet ovulated, it prevents ovulation. 2) If she has ovulated, but has not conceived, it prevents conception. 3) If she has conceived, it prevents the tiny baby (referred to as a “blastocyst”) from implanting in the uterine wall, which causes the baby to die because he or she cannot receive the nutrients needed to survive.

The SART team deceives a raped woman if they tell her that the Morning-After pill does not “terminate a pregnancy.” If she is pregnant, the pill does kill.

As I lay there crying and in pain, I knew in my heart that a life, no matter how it is conceived, is still a precious gift created by God. It is a gift that I knew I had no right to destroy, regardless of the trauma I was now experiencing. No pre-born child deserves capital punishment for the sins of the father. So, I knew, as I sobbed while they took the most graphic pictures of my injuries, that regardless of the future, I would choose life.

That night I not only declined the Morning-After pill, but I refused to take any of the STD emergency antibiotics, not sure which pills the SART nurse might slip in if I took any. So, I took the risks with my health and trusted God.

I have since learned that it is standard practice that while the rape kit is being performed, not only is the Morning-After pill given to victims of rape, but also emergency antibiotics to combat sexually transmitted diseases (STDs), including AIDS, just in case the victim has been exposed. All the pills are usually administered together. There is no way for a girl to know which pill is what.

Even though I had declined the abortion pill, the nurse continued to strongly advise that I take it, saying, “Who would want a baby out of rape?”

I was shocked and saddened by her comment. I felt very much like the nurse was trying to manipulate me into doing what she wanted me to do, not what was in the best interest for a potential pregnancy, or for me.

I eventually was released from the hospital and drove home throughout the night, not knowing what the future held. But I knew who held my future: my Lord and Savior, Jesus Christ.

The next few weeks were physically painful and ridden with anxiety as I waited to see if the pregnancy tests I took would either show one line or two. But the tests were only showing one line. I was surprised when a doctor confirmed that I was not pregnant.

Tests that I took six months later also showed that I had not been exposed to any type of STDs.

As I reflect on that low valley I walked through in 2009, I am able to say that, regardless of what the pregnancy tests revealed weeks after my rape, I did choose life under the most unthinkable and traumatic circumstances while facing a world of unknowns. It’s a choice I would make again.

Since my rape, I have forgiven my rapist. I have become an advocate for abuse victims, speaking about rape, choosing life, and domestic violence. I have found hope and healing through God. Today I am an advocate for the pre-born.

I refused the Morning-After pill after rape because I am pro-life. It is deeply woven within the very core of who I am. My choice for life has helped make me into the woman I am today.

Editor's Note: Witlee Ethan's story is used here by permission from the author. It has been edited. Witlee can be reached on twitter: @VoiceUrRights.