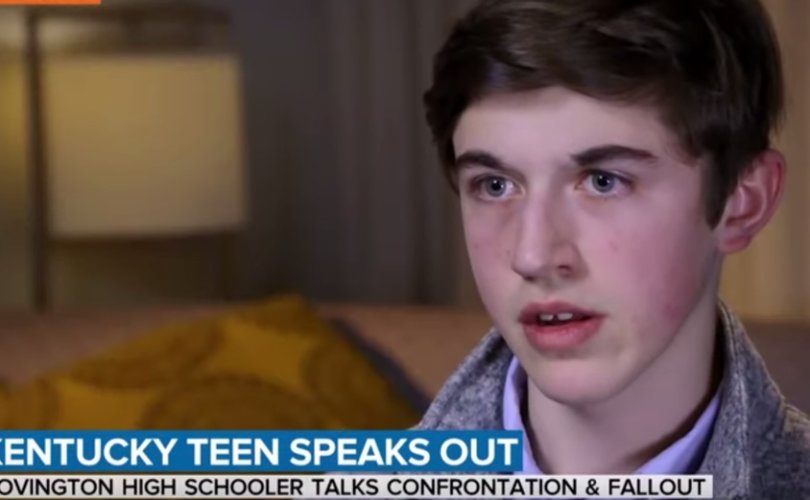 Nick Sandmann on 'The Today Show'YouTube

NEW YORK CITY, January 23, 2019 (LifeSiteNews) — The boy at the eye of the Covington Catholic storm appeared on NBC’s “The Today Show” this morning.

Nick Sandmann, 16, became an unwitting figure of hate for thousands of people who watched a short video clip of him smiling at a Native American activist who was banging a drum in his face. The 64-year-old activist, Nathan Phillips, told media that the boy had blocked his way as he tried to climb the steps of the Lincoln Memorial in Washington, D.C.

Subsequently extended video evidence disproved Phillips’ story, but Nick and his schoolmates at Covington Catholic High School, who had travelled to D.C. for the March for Life, are still being smeared as racist bullies. Nick is accused of “smirking” disrespectfully at the older man.

NBC had recorded three interviews with Nathan Phillips before speaking to the boy he accused.

Savannah Guthrie of “The Today Show” began her interview by asking Nick if he wanted to apologize for his actions.

“As far as standing there, I had every right to do so,” the boy said. “My own position is that I was not disrespectful to Mr. Phillips.”

He said that in hindsight he wishes he and his fellow students could have walked away and avoided “the whole thing.”

“But I can’t say that I’m sorry for listening to him and standing there,” Nick added.

Asked what it was like to be at the “center of the storm,” the teenager said that it was “weird” to see his face on television. Nick has been receiving a lot of supportive messages but also many hateful comments.

Nick and his schoolmates were on the receiving end of many hateful comments in Washington, D.C. as they waited with chaperones for buses to take them home. Members of the racist “Black Hebrew Israelite” sect, who had been harassing passersby of all races, turned their attention to the Covington Catholic High School boys.

Nick told Guthrie that these African-American men shouted homophobic, racist, and other derogatory remarks at them. As he gave examples, NBC bleeped one out.

Guthrie wondered why the boys would have been afraid of these men, as they outnumbered them.

“I definitely felt threatened,” Nick said. “They were a group of adult men. I wasn’t sure what was going to happen next.”

Nick said the boys got permission from a chaperone to drown out the taunts with school cheers. Many viewers have characterized the boys’ chanting as aggression.

“In hindsight I wish we had just found another spot to wait for our busses,” he said, but said that at the time chanting seemed the best way to drown out the adults’ abuse.

Asked by Guthrie if the boys had retaliated with racist remarks, Nick cited the Catholic teachings of his school and stood up for his classmates.

“We’re a Catholic school,” he said. “It’s not tolerated. They don’t tolerate racism. My classmates are not racist people.”

Guthrie admitted that NBC News had also not heard any recording of the boys shouting “that hot-button phrase,” but cited the testimony of the much-interviewed Nathan Phillips, who claimed they did.

When asked about the boys’ reaction to Phillips, Nick said that they thought at first that the drummer was accompanying their school cheers.

“At first we were unsure about if he was trying to join in and drum to our chants or what he was doing,” he said.

Nick was adamant that he was not impeding Phillips.

“I’m not sure where he wanted to go, and if he’d wanted to walk past me, I would have let him go,” he told Guthrie.

After it became clear that Phillips was not friendly to the boys, all Nick wanted to do was defuse the situation. He told his interviewer that he wanted to see the situation die down and the drummer to walk away. He thought that if he kept his composure and didn’t do anything that could be construed as aggressive, the tension would die.

The boy said he did not walk away himself because he didn’t want to seem disrespectful to Mr. Phillips if the older man was trying to talk to him. There were also the crowded situation and all the camera phones recording his every move to contend with.

“I didn’t want to bump into someone, or seem like I was trying to do something,” he explained.

As for the supposed “smirk,” Nick said he saw it as a smile telegraphing a refusal to become aggressive.

“I see a…smile saying that this is the best you’re going to get out of me,” the teenager said.

“You won’t get any further reaction of aggression, and I’m willing to stand here as long as you want to hit this drum in my face.”

Nick observed that people are judging him for one facial expression, using it to characterize him as someone who is racist and “disrespectful to adults.” He noted that people who have done that have not consulted anyone who might have given them the “opposite story.”

As for the idea that the Black Hebrew Israelites might have been intimidated by the boys, Nick pointed out that the men had harassed them.

Guthrie suggested that there was something aggressive about Nick standing in front of Phillips and Phillips standing there in front of him.

“You both stood your ground,” she said, “and had quite a staredown.”

“Mr. Phillip had his right to come up to me; I had my right to stand there,” the boy replied.

As for the famous MAGA hat, Nick bought his that day from a street vendor in D.C. He said it was possible that it was the hat that attracted Phillips to him, but added that he did not want to assume what Phillips was thinking.

“I’d rather let him speak for why he came up to us,” he explained.

Poignantly, after repeating that he respected Mr. Phillips and wanted to speak with him, Nick said that he wanted to thank him for his military service.

The interview was taped yesterday before it was discovered that Phillips, who allowed media to believe he was a veteran of the Vietnam War, never saw action and has a military record blemished with AWOLs. According to the most recent media reports, Phillips served in the U.S. Marines from 1972 to 1976 under the name “Nathan Stanard” but was never deployed to Vietnam. Apparently he spent most of his service as a refrigerator mechanic.

As for the impact Phillips’ story of “white teenage bullies” has had on his life, Nick said that it has been hard on him and his family.

“It’s been terrible,” he said. “People are threatening our lives.”