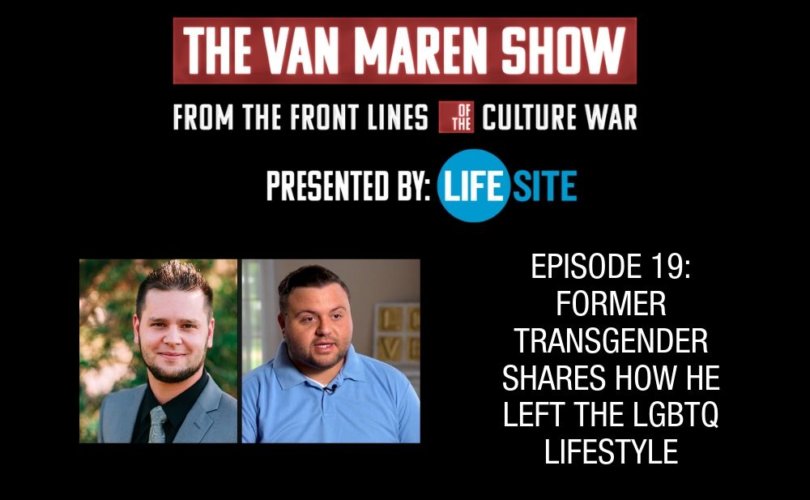 May 29, 2019 (LifeSiteNews) – According to the mainstream media, people like Jeffrey McCall don’t exist. The mainstream media insists people don’t leave the LGBT lifestyle. However, McCall is one of many who are standing up to share their stories of leaving that life behind and moving ahead in the grace of God. In episode 19 of The Van Maren Show, McCall talks about the moment he decided to literally throw his transgender identity into a dumpster and walk away forever.

Jeffrey McCall is the co-founder and CEO of Freedom March and CEO of For Such A Time Ministry. He also authored a memoir-style book titled, “For Such A Time,” which chronicles his personal journey. McCall began experiencing same-sex attraction when he was 12 years old and began to live out that lifestyle by the age of 15. When he reached his late-20's, McCall began to believe he was transgender and needed to “transition” to a woman.

McCall details the moment he heard from God and how he moved from being on the fast-track to “becoming” a woman to leaving the homosexualist movement and his friends in it in pursuit of Christ’s will for his life.

Van Maren and McCall spend time discussing why the LGBT movement and mainstream media are so against sharing and hearing stories of individuals who have left homosexuality and transgenderism.

“I think some of them come against us because it stirs something inside of them, something they remember from being young. They remember a feeling of knowing something wasn’t quite right with this whole sexual identity. And there could be something more that God had for them. I know so many people that may not admit, but they feel that way,” says McCall.

The second annual Freedom March happened in Washington, D.C. this past weekend. Over 200 ex-LGBT men and women from around the country attended the rally to celebrate the power of the grace of Jesus Christ on their lives. Read the full report here. To learn more about the Freedom March, click here.