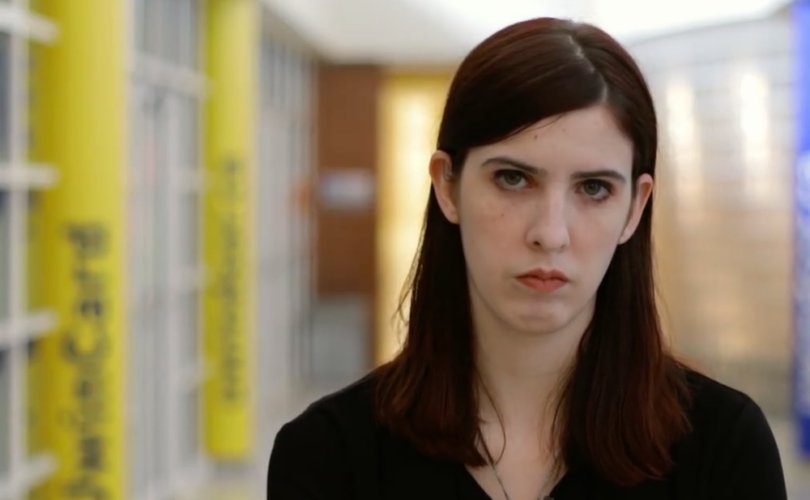 WINDSOR, Ontario, September 14, 2018 (LifeSiteNews) – University campuses in Canada are run like petty, pro-choice dictatorships with student councils and faculty members censoring and even making it dangerous for pro-lifers to speak up, says a University of Windsor student.

Although she prefers only her first name be used in this article out of a fear of reprisals from abortion activists, Maggie is stepping up and talking about the obstacles pro-lifers face on Canadian university campuses in a video on Facebook.

It's called Maggie: #TheNewDictatorship. It's part of a public awareness campaign by National Campus Life Network, an organization that trains students to become pro-life leaders, where Maggie now works as a regional coordinator.

In that video, she recounts some of the mistreatment she has endured because of her pro-life views at institutions of higher learning.

Although universities pride themselves as being bastions of free speech, safe places to explore all kinds of ideas, that hasn't been Maggie's experience.

“I've been repeatedly dehumanized on my campus because of my pro-life views,” says Maggie in that video. “I was an item of discussion in the classroom. I was spat upon by a professor during a campus outreach. Campus police threatened to arrest me.”

In April 2016, Maggie was even physically attacked by a hooded man who cited her “anti-choice” convictions during the assault.

Then only 20 years old, Maggie was already an outspoken pro-life university student on that day two years ago. As she walked home from campus, a man in dark clothes pushed her against a fence and derided her for her pro-life beliefs.

“Would you still be anti-choice if you had to make the choice?” he mocked.

Afterward, that man put a photograph of an aborted baby in her mailbox at her home. On that picture were the words, “Your baby after I rape you.”

Terrified to leave her home, Maggie needed therapy to deal with the trauma of that attack. She failed classes. She lost friends.

And even though he confessed to the attack, that man was never charged and still remains at large due to a lack of evidence, said Maggie in an interview.

“Not a day went by in my second year when I was not dehumanized and lied about on campus,” she says in the video. “Instead of helping me, my women's centre denied me. They told me they wouldn't help me because it was a 'pro-choice space'.”

One days while she was “chalking”, writing the positive, pro-life message “Women deserve better than abortion” on a sidewalk at the University of Windsor, a professor spat on her, she said.

According to Maggie, campus security later called her home about the incident and threatened to have her arrested if she ever did that again, even though the University of Windsor has no policy against chalking.

“They told me to get off of my political soapbox and act like a decent human being,” she said.

A culture of censorship pervades Canadian university campuses and that can easily get dangerous for pro-life students, said Maggie.

She's not the only student pro-lifer to run into censorship and mistreatment on campus.

Late last year, a pro-life student group at the University of Ottawa was censored and stripped of its club status by its student union because its mandate promotes human rights for all human beings. That student union later made its “pro-choice” position official and announced it would only support groups that support legalized abortion.

The year before that, pro-life students at Brandon University took their student government to court when it denied them club status on the grounds that its displays were deemed “intimidating” and that the abortion issue was already adequately covered by pro-abortion groups.

Marxist ideology has so taken hold of student unions and faculties that they now tend to see discussions through the lens of class conflict and hurt feelings from ideas deemed offensive are viewed as justification for physical attacks, said Maggie.

“If they don't like [what someone is saying], they see it as hurting them. They see words as violence that can be met with violence,” she said.

Despite all of the harassment and even the violence she has endured, the now 22-year-old pro-lifer is adamant that it's all been worth it and she encourages other student pro-lifers to stand up for their beliefs as well.

“For everything that's happened to me, none of it is worth even one abortion,” she said.

The Maggie: #TheNewDictatorship video has been seen roughly 39,000 times and shared 703 times as of this writing.