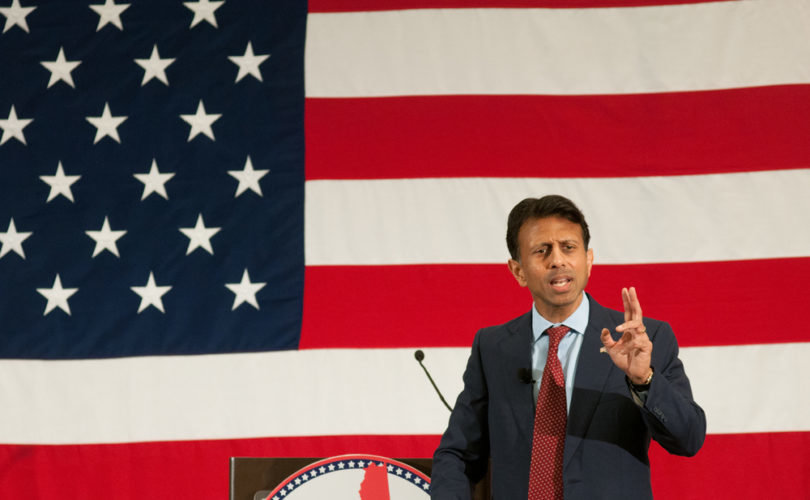 KENNER, LA, June 24, 2015 (LifeSiteNews) – Louisiana Gov. Bobby Jindal embraced religious liberty and the unborn in a rousing speech aimed at the party's base.

Jindal, who has presided over arguably the most pro-life state in the union, became the 13th Republican presidential hopeful to enter the race with an early evening speech delivered at the Pontchartrain Center in Kenner, Louisiana.

“Every Republican will say they will fight to protect the unborn, repeal ObamaCare, secure the border, and destroy ISIS,” he said. “I won’t simply talk about these things, I will do these things.”

Jindal has been as good to his word. He had a 100 percent pro-life voting record during his two terms as a U.S. congressman.

Under Gov. Jindal, Louisiana has been the top pro-life state in the country for six years in a row, according to Americans United for Life's 2015 Life List.

He has signed legislation requiring abortionists to have admitting privileges, meet the same health and safety standards as other ambulatory surgical centers, and offer to show women an ultrasound before an abortion. He opted his state's insurance providers out of covering abortion under ObamaCare. He strengthened pharmacists' conscience protections.

He signed a law saving the life of a baby whose pregnant mother is declared “brain dead.”

He also vetoed a bill to legalize surrogate motherhood, saying that commercializing births would change “the way we value human life.”

In his announcement speech today, the governor again stood up for religious freedom, saying that “Christianity is under assault today in America.”

“Religious liberty,” he said “is fundamental to our freedom.”

“I’m going to say this slowly so that even Hillary Clinton can understand it,” he said before reviving a recurring phrase from his speeches: “America did not create religious liberty, religious liberty created the United States of America.”

But the man who badly fumbled the Republican response to the State of the Union event hopes he will not be remembered for his ability to give a speech but his record of accomplishment.

“To be sure, there are a lot of great talkers running for president already,” he said. “If great speeches helped our country, we would be on easy street right now.”

He has actively protected religious liberty, signing a Religious Freedom Restoration Act, then promoting another measure to prevent the state government from taking punitive action against businesses that refuse to take part in a same-sex “wedding.” When Republicans in the state legislature defeated the bill, he enacted the provisions he could by executive order.

He vowed to take the fight, not only to Democrats, but to Hollywood and Big Business, if necessary.

His determination to preserve religious liberty has cost him some backlash. IBM refused to hold a ribbon-cutting ceremony at a new institution in Louisiana after Jindal refused to cave on conscience exemptions to same-sex “marriage.”

Jindal has said if the Supreme Court redefines marriage, “the remedy would be a Constitutional amendment.”

In today's speech, he also talked about his record in “getting rid of Common Core,” a curriculum that has concerned parents both with its approach to teaching basic mathematics and its views of American history.

He summarized his platform neatly near the end of the speech.

“As president I’ll have four objectives,” he said.

“I will secure our borders. I will replace ObamaCare with a health care system that focuses on reducing costs and restoring freedom. I will grow the private sector economy by shrinking the size, scope, and reach of the federal government. And I will rebuild America’s defenses and restore our standing on the world stage.”

Despite his impressive record, Jindal enters the race with little name recognition. According to a new poll, he ranks 15th among current and potential GOP presidential hopefuls – too low to participate in the August Fox News debate in Cleveland.

After years of action, he now hopes pro-life conservatives will give him a chance to speak.

Bobby Jindal: If SCOTUS overturns states on marriage, it’ll be time for a constitutional amendment