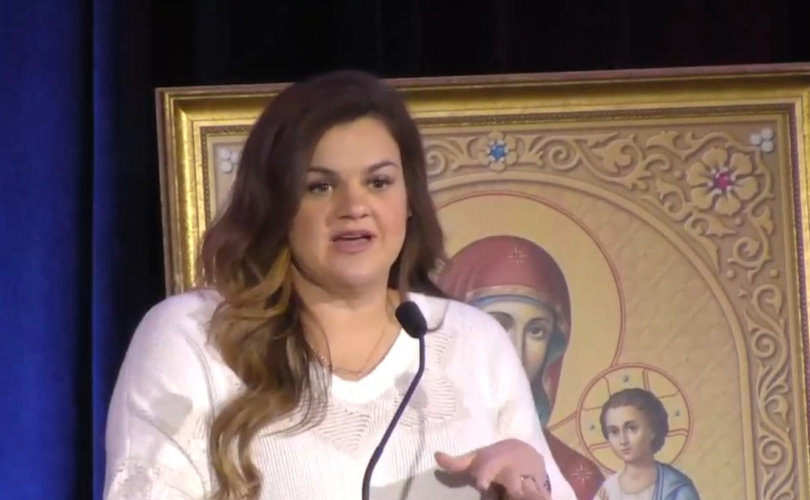 PITTSBURGH (LifeSiteNews) — One of the world’s most powerful pro-life voices on Saturday decried vaccines tied to abortion, now culminating in the Catholic clergy’s encouraging what Abby Johnson characterized as cooperation with evil.

At the Catholic Identity Conference in Pittsburgh, former Planned Parenthood facility director turned pro-life warrior Abby Johnson explained that it’s not only the abortion industry that has sunk to new lows in its callous disregard for the lives of mothers: The Catholic hierarchy has promoted evil by encouraging the use of vaccines developed with cell lines of aborted children, even becoming complicit in forced abortion-tainted vaccination.

Johnson, who left Planned Parenthood 12 years ago after being shaken while assisting an ultrasound-guided abortion, highlighted the fact that the abortion industry has become more “brazen” than ever before in promoting the killing of the unborn.

Even after abortion was legalized, she pointed out, it was not portrayed in the media as it is today. “Women weren’t up on the podium shouting their abortion. Women were not proud of the fact that they had killed their children,” said Johnson. “I saw a woman the other day wearing a shirt that said, ‘I’ve had 21 abortions.’ And you say, ‘Abby there’s no way …’ We had women that came into my clinic all the time that had 16, 17, 20 abortions.”

“The bottom line is that in today’s society women are using abortion as a form of birth control,” said Johnson.

This is not how it was first sold to the American public, explained Johnson. It was instead promoted as something that would “solve the ails” of society, like poverty, crime, and domestic violence. But “from 1972, before Roe, until today, we actually see a dramatic increase in those rates,” she said.

“[Abortion] actually compounded the problems that women and families were having. Why? Because it’s just another form of abuse. It’s a form of dehumanization. If you’re willing to kill the most innocent, the most vulnerable of your society, then you’re willing to abuse and kill anyone else. It actually was not the solution that they promised it was going to be. It’s incredibly diabolical.”

As recently as the first term of Barack Obama’s presidency, “abortion was still being sold as something that needed to be safe, legal, and rare,” said Johnson. “I even believed it. I mean, that was one of the reasons I got involved in Planned Parenthood.”

Now, Johnson said, “It’s not about preventing abortion at all. It’s about access to abortion at any and all cost.”

To drive her point home, Johnson told the disturbing story of a recent experience she had with an abortion pill website that sprung up after Texas passed its heartbeat law. The company shipped its abortion pills from India in order to bypass the law, and was receiving considerable social media attention.

In an experiment to see what the process of ordering these pills looked like, Johnson posed as an 18-year-old ordering abortion pills for a pregnancy she said she thought was 9 weeks and 6 days along, falling just short of their cutoff of 10 weeks. In submitting the required form, Johnson was not required to provide an ultrasound as proof of the baby’s age, but could provide an estimate from the date of her last menstrual period.

Johnson said that when they asked for ID to prove her age, and she emailed them to say that no, she actually didn’t have ID, she thought “for sure” that this is when they were going to say, “Well honey, we can’t do it then.”

Instead, Johnson said, “They email me back and they say, ‘No problem. Here’s what we need you to do. On a piece of paper, write down your name, write down the date of birth you gave us, write down the consult ID that we gave you, hold the piece of paper by your face, take a picture, and that’s gonna be your ID. Email us back with that picture, you’re gonna pay us $110, then we’re gonna send you the abortion pills in the mail. By the way, they’re gonna come from India. So it’s gonna take about 4 weeks for them to get to you.”

Johnson then laid out horrific scenarios that could have occurred if her pretended pregnancy was real.

So let’s say I am ten weeks pregnant. I’m gonna do the medication abortion when I’m 14 weeks pregnant. By that time, my baby [is] fully formed. At 14 weeks my baby is pretty large, actually.

And at 14 weeks, if I’m 18 — Maybe I’m 15 and I’m actually being trafficked by an older man, I’m being abused. But my young body is probably not going to be able to pass a fully formed baby out of my uterus.

And so what more than likely is going to happen, is that the pills I take are gonna kill the baby, but the baby is gonna be stuck in my uterus. Because I’m 18, or 16 or 14, I don’t know much about my body. And so I’m gonna bleed and I’m gonna assume, that was it, that was the abortion. But I’m still gonna have my dead baby in my womb.

And then a couple weeks later I’m gonna start running a fever… And I’m gonna get sicker and sicker and think maybe I just have the flu. Or COVID. And then one day my parents are gonna find me in bed, and I’m gonna be dead. Because I had sepsis. And they had no idea that I was even pregnant. Because I got pills online for $110 from India.

Or, maybe I take the pills… at two o’clock in the morning when my parents are asleep. And I take them in my bathroom alone. Maybe only a leg comes out, and an arm comes out. And maybe I begin to hemorrhage because my body is trying so hard to pass this baby… and I bleed to death.

See, and I’m giving you a hypothetical situation here, but this is a reality taking place in our country today. If that doesn’t tell you the demonic presence that is within abortion, I don’t know what else would. The abortion industry is so desperate to kill a baby that they are willing to kill a mother in the process.

It can’t get worse than that, right?

‘Where are you, Church?’

Johnson went on to lament that unprecedented levels of moral compromise haven’t stopped with secular society. They have seeped even into the Church hierarchy.

For 12 years, Johnson said she told herself, “There’s one thing you should never talk about: vaccines.”

“Then the COVID vaccine came out. And I thought: Johnson, you gotta talk about it. And so I did,” she said, sharing that a viral video she made, in which she slammed the U.S. bishops’ equivocation on abortion-tainted COVID vaccines, “has essentially made me persona non grata to the Catholic Church. I have had speaking events canceled with various dioceses. I have had events canceled with various right to life groups.”

“Never in my life did I think that as a pro-life person, speaking about the fact that aborted babies are being used in vaccines, the Catholic Church and right-to-life groups would try to silence me and censor me. Yet here we are. That’s the state of our movement and that’s the state of our church. The mainstream church, I should say.”

“It was very eye opening to me. I started looking, I started digging … I thought, if I attack this giant, I better know what I’m talking about.”

Again and again, people shared the National Catholic Bioethics Center (NCBC) webpage about vaccines with Johnson. “I don’t know that I’d ever seen so many contradictions in one document before,” she remarked. “And I worked for Planned Parenthood.”

“As if the degree of evil diminishes as time goes on. Like Ted Bundy’s crimes are less severe because they took place decades ago. That’s essentially what they were saying,” she added. “On one hand they were saying that it’s morally acceptable to take this vaccine, but on the other that we needed to protest it. Well, why do we need to protest it if it’s okay?”

“And so that was when I began to speak out. I became so convicted about it, because I was just waiting for my beloved Church to come out and say no, we will not do this. Because Scripture tells us that when we see evil we do not cooperate with it. When we see evil, we flee from it,” said Johnson.

Johnson went on to predict that if the clergy told the laity “not to comply” with unethically developed vaccines, “then I guarantee you, an ethical option [would] pop up in minutes.”

“But to my surprise, they didn’t. They just rolled over like they’ve always done. In the face of a moral evil, they just accepted the evil. And worse than that, they told us to accept the evil,” said Johnson, visibly grieved.

“And things have just continued to get worse,” Johnson went on. She pointed out that Pope Francis has urged “everyone” to get vaccinated, as a matter of ethics, “but he was directly contradicting what the CDF just said. That it should always be voluntary,” she said, referring to the Congregation for the Doctrine of the Faith’s note from December 2020.

Pope Francis has called receiving the vaccine “an act of love,” but Johnson maintains: “Loving my neighbor looks like warning them of the effects of a dangerous vaccine.”

Johnson asked why the Catholic Church hierarchy isn’t calling out so-called Catholic institutions like Notre Dame for mandating a vaccine, when its “own bioethics committee said that that’s not ethical.”

“So where are you, church? Where are you, Pope Francis? Why aren’t they speaking up? They’re silent. You know why? Because they are perfectly fine with forced vaccinations. That’s why. They have no problem with us being forced to vaccinate ourselves. And their silence tells us all we need to know.”

Forcing someone to put something into their body, said Johnson, “goes against everything we believe, not just as Americans, but it goes against the Catechism of the Catholic Church.”

“And I have to think, what are we afraid of? I’m not afraid. I have great hope in where I will spend eternity. I’m not afraid of death.” She went on to encourage the audience: “If anybody in the world should not be scared of death, it’s us.”

One of our most powerful tools is social media. Post what’s happening in the abortion world. Post about where women can go if they’ve had an abortion. Post about local resources in your community. Post cool little graphics from different ministries. Because you never know who’s scrolling through your social media page. God never wastes anything, ever.

For encouragement to those who wonder if what they’re doing is making a difference, Johnson told the story of how a young man who used to pray outside Johnson’s former Planned Parenthood center was asked to pray for her by name.

The Coalition for Life had asked a dedicated prayer group outside the clinic to pray for particular people who worked there. One young man was asked to pray for Johnson every day for a year. Johnson explained, “This is the end of 2008, beginning of 2009, which is the year I left. So he was praying for a full year for me by name.”

Johnson left the clinic in October 2009, and the young man entered seminary, getting to know Johnson through his priesthood.

“We got to become very good friends,” said Johnson. One day, after Johnson had been at a new parish for only a month, she “got notice that that guy, who prayed for me every day, is now my parish priest.”

“God does not waste anything. We have to keep praying, we have to keep sacrificing. I believe we can make abortion unthinkable again,” she concluded.