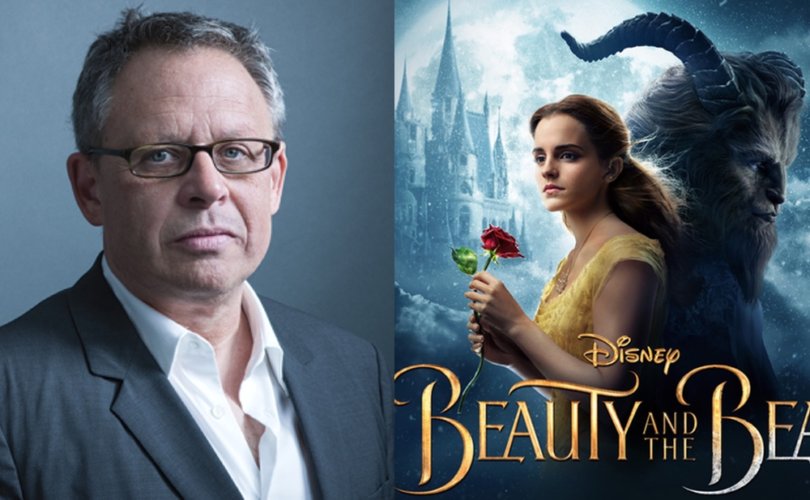 March 17, 2017 (LifeSiteNews) — In a 2007 interview that is getting renewed attention this week, Beauty and the Beast director Bill Condon said that he wishes he could “rip pages out of the Bible” when he stays in hotel rooms.

When asked by Passport Magazine in the interview what the first thing is he does when he gets into a hotel room, he replied: “I wish I could say I’m like Ian McKellen and immediately go rip pages out of the Bible, but there don’t seem to be bibles in the hotel rooms I stay in these days.”

The openly homosexual director’s film is being boycotted by Christian and Conservative groups after he revealed that it contained what he called an “exclusively gay moment.”

“Le Fou is somebody who on one day wants to be Gaston and on another day wants to kiss Gaston,” Condon said in a March 1 interview with Attitude.

“He’s confused about what he wants. It’s somebody who’s just realising that he has these feelings. And [actor] Josh makes something really subtle and delicious out of it. And that’s what has its payoff at the end, which I don’t want to give away. But it is a nice, exclusively gay moment in a Disney movie,” he added.

According to a report by The Charlotte Observer’s Lawrence Toppman, there are two homosexual moments in the film. The first comes when “a young man whirls into the surprised Le Fou’s arms, and they dance happily away together” and a bit later in that number, Le Fou “spins across the room and lands on the reclining Gaston’s lap, wrapping Gaston’s arms around him.”

A petition to boycott the film created by LifeSiteNews has been signed by 131,000 people. The petition to Disney states:

“Children's movies are no place for promoting a harmful sexual political agenda, one that offends the deeply held beliefs of countless parents and families.”

“I pledge to boycott both the Beauty and the Beast movie, and other Disney films and products, until such a time as Disney commits itself to protecting, not harming, the innocence of our children,” it adds.

Other boycotts have popped up throughout the country.

The American Family Association has 51,000 petition signers saying they “can't support Disney's ‘Beauty and the Beast’ movie” because it pushes the “gay agenda on our children.”

“Homosexual behavior is unhealthy and unnatural. It is irresponsible and careless of Disney to promote such an agenda in a movie designed and marketed to children,” the petition states.

Colorado Christian University created a petition to Disney CEO Rober Allen Iger where “Christian Americans” pledge to “not allow our children or grandchildren to be subjected to your radical Left-wing agenda through your latest rendition of Beauty and the Beast.”

“We will not allow you to bully us into going against our Biblically-based beliefs in natural marriage, and we will certainly not let you circumvent us as leaders of our families to force these beliefs on the impressionable young minds of our children,” the petition states. It is not known how many have signed this petition.

On March 2, evangelist Franklin Graham wrote his 5.5 million Facebook followers asking them to “say no” to Disney’s remake.

“Disney has the right to make their [shows], it’s a free country. But as Christians we also have the right not to support their company. I hope Christians everywhere will say no to Disney,” he wrote.

On top of this, Malaysia pulled the film from theaters after Disney refused to allow the country to cut out the pro-gay scenes. Added to this is Russia which slapped a  16+ rating on the film, effectively banning children from seeing it.

Earlier this month Christian owners of an Alabama drive-in theater said they would refuse to show the film because it would “compromise on what the Bible teaches.”

Meanwhile, LGBT activists are roasting Christians on mainstream media for what one called their “manic homophobia” that leads to “fatal beastliness.”

Hollywood pundits say Christian opposition to the film will “very unlikely” have any effect on box office sales.