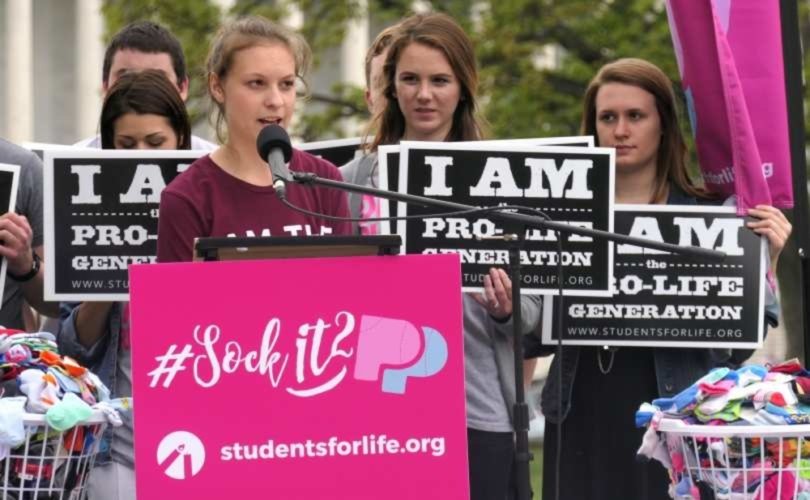 ROANOKE, Virginia, December 4, 2017 (LifeSiteNews) – An angry abortion activist punched a pro-life high school student outside a Planned Parenthood on Saturday, giving her a minor concussion but strengthening her resolve to fight abortion.

Another pro-life activist caught the assault on camera.

15-year-old Purity Thomas was praying outside the Roanoke Planned Parenthood on Saturday morning when a woman, apparently there for an abortion, became agitated at the pro-lifers.

“It was really cold out and I had actually just texted my parents to come and pick me up,” Thomas, who was holding a 40 Days for Life sign, told LifeSiteNews. She said a Liberty University student named Serena “called out to this woman.”

Serena said, “‘Good morning, we’re here for you, we’re praying for you. There’s other resources that we have, just wanted to offer them to you,’” Thomas recalled.

The woman approached Serena and began yelling, “what are you gonna do when I beat you all up, when I f*** you all up?”

“And then she was like, ‘I’m gonna have my girlfriends come and beat you all up,’” said Thomas.

The woman then asked Serena what she was going to do if she took her sign, which said, “All people are made in the image of God.”

“She grabbed that sign and she tried ripping it up but it’s really thick plastic so she ended up folding it up,” Thomas told LifeSiteNews. It was at this point that the teen, who is a high school fellow with Students for Life of America (SFLA), suggested to her fellow activists that they start filming.

When Thomas told the woman, “we’re praying for you,” the woman came over and began threatening to take Thomas’s sign as well.

“She tried taking my sign and then punched me right below the eye on my left cheek,” Thomas said. The video of the attack shows the punch caused Thomas to fall to the ground.

The other pro-lifers called 911 and the police came. The woman was not arrested.

“Immediately afterwards, I was really light-headed,” said Thomas. This was followed by a headache. A doctor discovered she had a minor concussion. Thomas said the site of the punching was red for a while.

Two days after the assault, “I just have a lot of pressure in my head right now,” she said.

“I absolutely forgive [the assailant],” said Thomas. “There’s no hard feelings towards her.”

She said she wishes she could “talk with her and be there for her.”

Thomas is also not revealing the identity of the woman because “she’s just suffered from an abortion.” Thomas doesn’t want her to be swamped with angry messages from those upset over that and the assault she committed. She hopes instead that the woman can heal.

“I feel super sorry for her and I want her to know that we’re not violent, we actually care about her,” said Thomas.

“Being punched was nothing compared to what those babies are feeling when they are aborted,” said Thomas. “And honestly, I would take a million punches if it saved one child.”

The teen has no intention of ceasing her pro-life activism.

“I will most definitely be there” again this coming Saturday, she said.

Kristan Hawkins, President of SFLA, called the incident an “act of violence” that “serves as a sad reflection on the state of debate today.”

“It’s horrific that a minor expressing love for pregnant women was targeted for violence,” said Hawkins. “But this is not an isolated incident. Across the country we are witnessing a rise in the number of incidents of vandalism and violence against peaceful pro-life speech.”

“Even the American Bar Association is demonizing pro-life speech, trying to block pro-life attorneys from taking a seat on the bench,” said Hawkins. “We pray that the assailant…is brought to justice swiftly. But we also pray for the protection of those who volunteer their time to speak for the innocent, preborn infants and their mothers.”

SFLA has launched a webpage through which people can send Thomas supportive messages.

Thomas spoke on Capitol Hill at SFLA’s #SockIt2PP rally on April 26, 2017. The spunky adolescent is already a senior in high school despite being only 15. She is homeschooled.