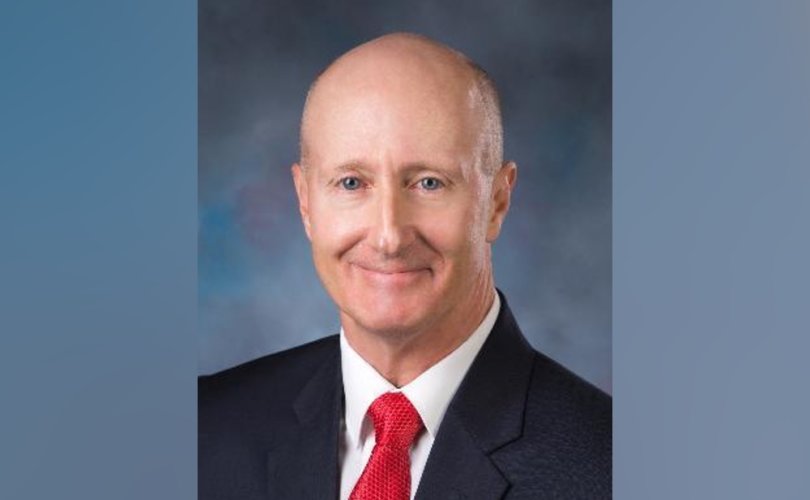 BOISE, Idaho, February 20, 2018 (LifeSiteNews) – Mainstream media is slinging mud at a pro-life Republican state senator in Idaho after he was filmed in a heated exchange with a dozen or so pro-abortion college students affiliated with Planned Parenthood, telling them that abortion is “murder.”

When State Sen. Dan Foreman (R) canceled a meeting with University of Idaho students on Monday, the Planned Parenthood-affiliated group left condoms in the Catholic senator's office in response. The group was lobbying lawmakers to pass two bills, one on providing tax-funded birth control and another on updating the state’s sex-ed program.

Despite the meeting being canceled, the students continued to press Sen. Foreman on condoms, contraception, and comprehensive sex education for school children.

Then, in a face-to-face confrontation with the students, Foreman explained what he really thinks about Planned Parenthood’s work.

“Abortion is murder. I stand against it. I am a Roman Catholic. I am a conservative Republican. I think what you guys do stinks,” he said.

One student challenged Sen. Foreman, stating, “That is your choice.”

Foreman immediately responded: “You're d-mn right it's my choice, so stay out of my office.”

He told the students that if they continued to hound him in the Capitol lobby, he would contact security.

When Foreman left the students to return to his office, one girl can be heard saying about the Senator's remarks, “I got it.”

When video of the exchange was posted on social media, mainstream media slammed the politician for his comments to the students. Many ran headlines saying Foreman screamed, shouted, or ranted at the students. They carried commentary by a Planned Parenthood spokesperson who said that the senator was “unhinged” and being a “bully.”

Foreman told LifeSiteNews that he considers himself “blessed” for being given an opportunity to defend life.

“I consider myself blessed to have been presented with the opportunity as a legislator to stand for the rights of the unborn. Abortion is a national disgrace and an affront to the Almighty – the Creator of Life,” he said.

A 30-year U.S. Air Force Master Navigator and combat veteran on jet tankers and aircraft, Foreman retired as a full colonel and vice commander of the 168th Air Refueling Wing in Alaska.  Foreman also served as a police officer for eleven years after his military service.

The first-term Republican has been married to his wife Maria for 42 years, and they have seven children and 20 grandchildren.

A staunch pro-life, pro-marriage, and pro-family legislator, Foreman introduced a bill as soon as he took office that would classify abortion as “murder.”  “I don’t want to tell a woman what to do with her body, and neither should the government,” he explained.  “But using that same logic, how can a woman tell her unborn child it has to die? Who represents the child?”

“I’m tired of babies dying,” he said. “It’s time to start the fight, and I’ll be the point man. I’ve been through two wars and have 11 years as a cop. I’m not thin-skinned.”

The senator and family man says he is first and foremost concerned with “doing the right thing.”  “I don’t care what people think of me,” he said.  “I’m here (in the Legislature) to do what I think is best for the people.”

The politician now faces an ethics investigation after an unverified Twitter account allegedly belonging to Foreman sent a number of tweets concerning Planned Parenthood and abortion. The tweets were sent hours after Foreman's interaction with the students.

One tweet told the students to “stop harassing me and staff.” Another suggested that if they want to talk about “killing babies,” they should see Democratic Sen. Maryanne Jordan of Boise.

Idaho State Senator Maryanne Jordan (D) then filed an ethics complaint against Foreman regarding the tweet she was mentioned in, saying that his “behavior is beneath the Idaho Senate.”

After Jordan's ethics complaint, the year-old twitter account was deleted, only to come back online to confirm that it was not associated with Foreman.