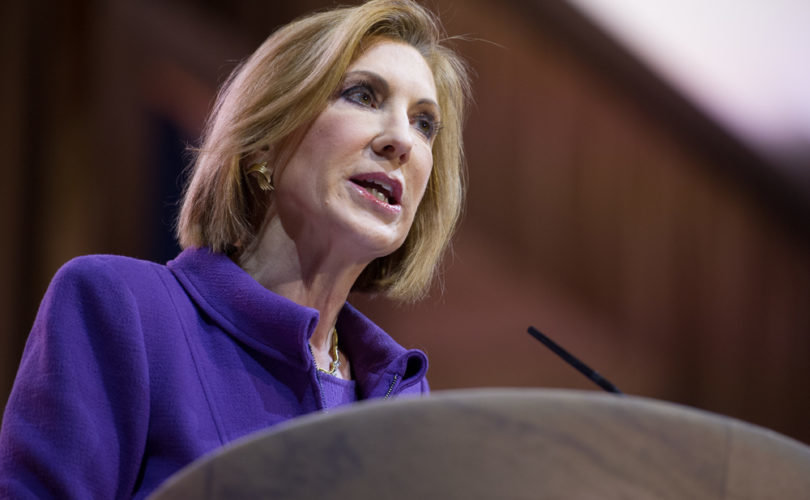 Updated at 5:15 p.m. EDT to include remarks from Carly Fiorina.

Cruz hailed Fiorina as “brilliant and capable,” saying she was a strong female leader who had “shattered glass ceilings.”

Sen. Cruz said he and his family had “come to adore Carly.”

He said Fiorina has the knowledge, judgment, and character to assume the presidency, if need be.

Sen. Cruz said the American people deserve “a choice and not an echo,” a reference to the 1964 book of the same title written by Phyllis Schlafly, the founder of Eagle Forum. Schlafly has endorsed Donald Trump.

In her remarks, which she glanced at only intermittently, Carly Fiorina saluted Cruz as a “principled” leader who had fought for religious liberty and would not waver in his defense of the Constitution.

At one point, Fiorina broke into a snippet of a four-verse song she wrote for Cruz's two daughters, Caroline and Catherine.

Becoming more serious, she invoked her mother's Sunday School lesson that the life you forge “is your gift to God.” That taught her that “everyone deserves the right to use his God-given gifts to live up to his potential,” and the American genius was reckognizing that this right had been endowed by the Creator.

To allow maximum human flourishing, she said, Sen. Cruz would return as much power as possible to the states and to the people, a view that jibes with the Ninth and Tenth Amendments, as well as the principle of subsidiarity.

“Cruz has no path to victory,” he said. “He is only trying to stay relevant.”

In his speech this afternoon, Cruz responded that “nobody is getting to 1,237 delegates” before the convention.

Pro-abortion groups called the ticket out-of-touch with the feminist movement.

Planned Parenthood tweeted that the pairing was “loathsome”:

“If Ted Cruz thinks he will fix his problem with women voters with Carly Fiorina, he's making a huge mistake,” agreed EMILY's List President Stephanie Schriock on MSNBC this afternoon. “They want to dismantle Planned Parenthood. This is not a team that women voters are going to be taking a serious look at.”

Carly Fiorina, she said, would offer an “incredible contrast” with Hillary Clinton.

But Cruz's decision was hailed by pro-life leaders.

“Carly Fiorina would have been a great presidential candidate. Barring that, she is the ideal choice for a Vice Presidential candidate. She will take Hillary Clinton head on,” said Marjorie Dannenfelser, president of Susan B. Anthony List. “Carly is ideally suited to challenge Hillary Clinton’s entire platform, especially issues related to women.”

“Hillary has claimed the ‘women's advocate’ mantle, without offering any compelling fresh perspective,” Dannenfelser continued. “Carly, on the other hand, has challenged and bested the entrenched feminist politicos, who purport to advance women’s rights even as they advance the usurpation of the rights of children.”

The last time a presidential candidate named a running mate who had no legislative experience was 1972, when George McGovern tapped Sargent Shriver, the last pro-life Democrat to appear on a presidential ticket.

Indiana will hold its primary next Tuesday, May 3. Polls show Donald Trump leading handily, but they were taken before Gov. John Kasich of neighboring Ohio agreed not to contest the state, leaving the anti-Trump vote to Sen. Cruz.