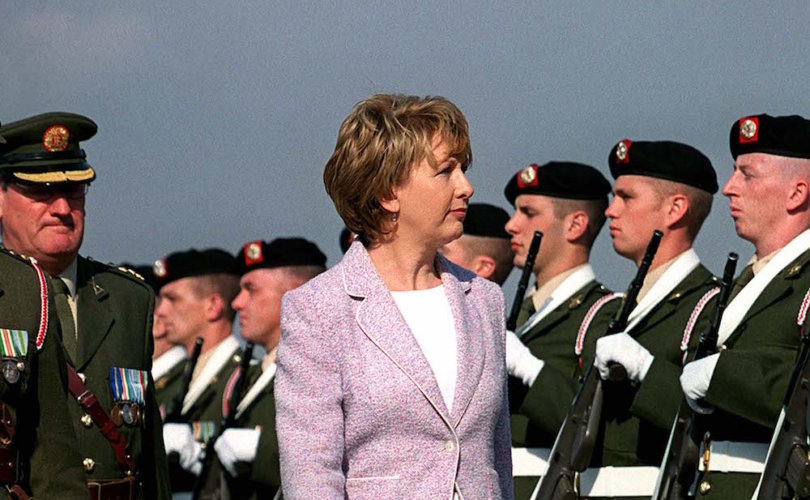 DUBLIN, Ireland, August 31, 2016 (LifeSiteNews) – Former Irish President Mary McAleese has responded to the recent scandal over homosexuality at the country's national seminary by saying she wishes the seminary would be more welcoming” to homosexuals.

McAleese, who considers herself “a staunch Catholic,” regrets the decision of two Irish prelates to remove their seminarians from St. Patrick’s College, the national seminary at Maynooth, and send them to Rome instead.

“I am just worried that the Maynooth controversy seems to be concentrating on the wrong things,” she told the Irish Times. “A seminary should be a place where people feel welcomed … not somewhere where they feel policed — after all, these are young people who haven't yet taken a vow of celibacy.”

McAleese’s comments follow closely those of Senator Jerry Buttimer, a former Maynooth seminarian who later declared his homosexuality. Buttimer called on the Church to openly recruit homosexuals for the priesthood to make it more welcoming to the LGBT community.

“These are issues surrounding celibacy, sexuality, formation and how the Church treats LGBT people, but especially LGBT people of faith, members of its own Church, who want to be ordained or … play a pastoral role,” Buttimer said.

Both statements fly in the face of the Church’s devastating experience with homosexual priests who were responsible for 80 percent of the sexual abuse perpetrated on minors since the 1950s. As a result, in 2005 the Vatican declared that the Church should not “admit to the seminary or to holy orders those who practice homosexuality, present deep-seated homosexual tendencies or support the so-called ‘gay culture.'”

But McAleese complained that seminarians were being hurt by the Church’s action “because the teaching of my church, the Catholic Church, tells them that ‘homosexuality is, of its nature, intrinsically disordered’ — those are the words of Pope Benedict — and that homosexual acts are, in his words, ‘evil.’”

McAleese's and Buttimer’s views on homosexuality are apparently shared by most people who consider themselves Catholic in Ireland. Polling indicates since at least 2010 a majority of Irish Catholics supported same-sex “marriage.” Last year’s referendum on the issue showed more than 60 percent of the population in support.

The existence of a homosexual subculture in the Catholic priesthood since the 1950s has been well documented. According to one 2002 study, 53 percent of priests who were surveyed agreed their seminary had a gay subculture. A study by the Kansas City Star in 2002 covering 14 states found the death rate from AIDS six times higher among priests than among the general population.