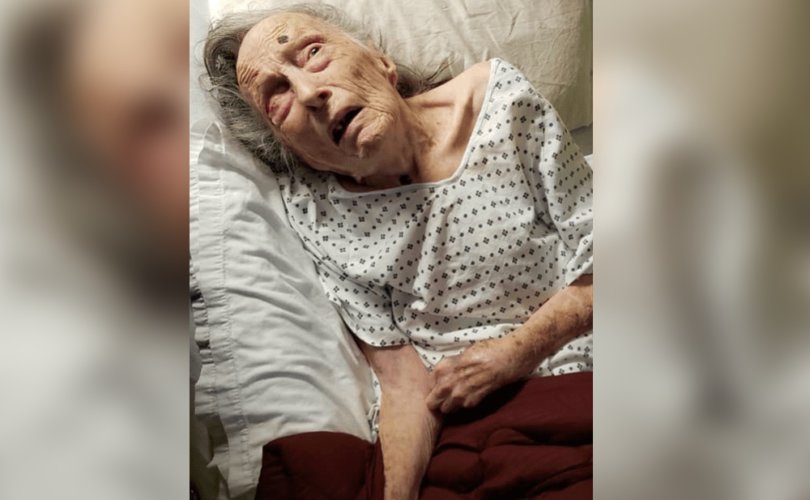 BIRMINGHAM, Alabama, July 5, 2019 (LifeSiteNews) – An 103-year-old woman with no terminal illness named Marian Leonard is being held at an Alabama hospice against her will, where her daughter says she’s not being properly fed and a state-appointed “guardian” has authorized doctors to give her powerful antipsychotic drugs despite no history of mental illness.

According to Leonard’s daughter, Nancy Scott, and Life Legal Defense Foundation (LLDF), “the state of Alabama placed Marian in protective custody and appointed a third-party guardian to take over Marian’s care after erroneously believing Nancy moved her mother to home care against a doctor’s recommendation. Ms. Scott says she had the ‘full permission and blessing’ of the doctor to move her mother from a nursing home in Tennessee back to the family’s home town in Alabama.”

Over Scott’s “strong objections,” her mother was placed at Diversicare of Riverchase, a hospice facility in Jefferson County. Diversicare is a chain of nursing homes with dozens of centers around the Southeast. The company offers “short-term rehabilitation,” “complex medical care,” “long-term care,” “memory care,” “hospice care,” and “assisted living,” according to its website.

Scott is now prevented from seeing her mother more than twice a month for 1 1/2 hours per visit – and she’s only able to see her at all because of the work of her local attorney.

According to LLDF, “The last time Nancy (Scott) went to see her mother, Marian pleaded with her to take her home, saying, ‘If you don’t get me out of here, they’re going to kill me.’”

“We are appalled that Alabama’s Department of Human Resources would consign an elderly woman to a facility against her will and then allow her condition to deteriorate so rapidly,” said LLDF executive director Alexandra Snyder. “Life Legal will do whatever is in our power to ensure that Marian Leonard receives the care she needs, including frequent visits from her daughter.”

“I have heard that Marian is receiving better care at the nursing facility since we posted the story (on June 26),” Snyder told LifeSiteNews. “However, the guardian has not budged on visitation and we are concerned he may again prohibit Nancy from seeing her mother.”

A 2018 federal inspection of Diversicare of Riverchase, conducted by the Department of Health and Human Services’ (HHS) Center for Medicare and Medicaid Services, found “the facility failed to routinely provide showers as scheduled to residents who required ADL (Activities of Daily Living) assistance.”

At least one Diversicare employee also prepared a patient’s ready-to-eat food with her bare hands, against FDA code.

A 2016 inspection report found Diversicare of Riverchase “failed to ensure residents were informed of and invited to their care plan meetings” and was deficient at having a “program that investigates, controls and keeps infection from spreading.” The latter offense involved a staffer wearing soiled gloves while caring for a resident with incontinence issues, putting the patient at risk of a urinary tract infection.

The Google reviews of Diversicare’s Riverchase facility are similarly dismal. As of press time, it has 2.6 stars out of 5. Reviewers call the center “filthy,” “deplorable,” “non-responsive,” “incompetent,” and a “dump.”

“Nancy has reported that her mother is not being given sufficient food and that the guardian had authorized Marian to be given antipsychotic drugs, including Haldol, even though Marian has no history of mental illness,” according to LLDF. “When Marian was first placed into the guardian’s custody, she could walk, was energetic, and was able to eat a regular diet. Now, she is bedridden, lethargic, and suffers from bedsores.”

“Bedsores are ulcers that happen on areas of the skin that are under pressure from lying in bed, sitting in a wheelchair, or wearing a cast for a prolonged time,” Johns Hopkins Medicine explains. “If an immobile or bedridden person is not turned, positioned correctly, and given good nutrition and skin care, bedsores can develop.”

Haldol is used to treat schizophrenia and schizoaffective disorders. According to rxlist.com, some of the most common side effects of this drug are extrapyramidal disorder and Tardive dyskinesia, common reactions to antipsychotics. These side effects cause uncontrolled muscle spasms and twitching.

The “prevalence of the syndrome appears to be highest among the elderly, especially elderly women,” according to rxlist.com, although it’s impossible to predict which patients will suffer from it. Other common side effects are drowsiness and dizziness, according to the Mayo Clinic.

The Patient Rights Act, a bill recently introduced by U.S. Senator Kevin Cramer, R-North Dakota, would potentially mitigate Marian Leonard’s situation if passed into law. Healthcare facilities could lose Medicare or Medicaid money for not exercising “the same degree of professional skill, care, and diligence to preserve the life and health of any patient as a reasonably diligent and conscientious health care practitioner would render to a patient in a different state of functionality, development, or degree of dependence.”

It would seem that not providing elderly and/or disabled patients with adequate access to showers, as detailed in the 2018 deficiency report, and denying them proper nutrition, as alleged by Leonard’s daughter, are exactly the types of abuse this bill is designed to prevent.

“The legislation also creates a right of civil action for patients and families to sue if a federally funded health-care group fails to respect a patient’s rights,” Alexandra DeSanctis wrote in a summary of the bill on National Review.