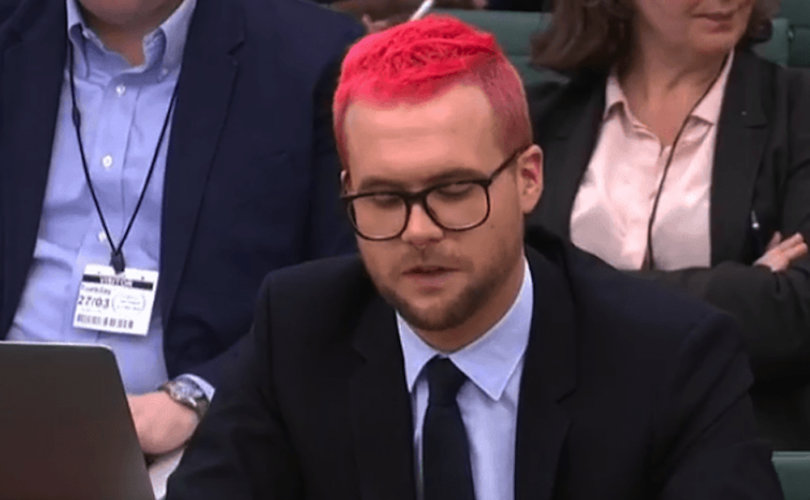 Christopher Wylie, the whistleblower behind the Facebook and Cambridge Analytica data scandal, appeared in front of U.K. lawmakers on Tuesday.YouTube

LONDON, England, March 28, 2018 (LifeSiteNews) — Facebook is able to monitor users in their homes and workplaces, a whistleblower in an ongoing data scandal told UK lawmakers Tuesday.

Facebook can use and process audio collected from users through its smartphone app to determine their whereabouts and better target them in advertisements, Christopher Wylie said in response to a question from MP Damian Collins.

Wylie said Facebook and other apps “pull audio” for “environmental context” to “improve the contextual value” of the ad targeting the user.

Facebook is in hot water following revelations that its leadership permitted Barack Obama’s campaign to mine users’ personal profile information because the social media giant wanted Obama to win re-election.

That part of the controversy began with reports that information mined by Cambridge Analytica was later used by the Trump campaign. But it then came to light that the Obama campaign essentially had unrestricted real-time access to users’ personal information with a green light from Facebook. The data utilized by the Trump campaign was left over from when Cambridge Analytica collected it in 2007.

Carol Davidsen, former Obama for America media director, was up front on Twitter last week, saying Facebook officials “were very candid that they allowed us to do things they wouldn’t have allowed someone else to do because they were on our side.”

CEO Mark Zuckerberg, attempting to do damage control last week during the Facebook-Cambridge Analytica scandal fallout, also acknowledged that Facebook profits to the tune of billions by targeting users for advertising based upon the profile information they provide to the social media site.

Wylie emerged as a primary figure in the Cambridge Analytica scandal last week after telling The New York Times and The Observer newspaper in the U.K. that the political consulting data company used personal information of as many as 50 million Facebook users without their knowledge via a third-party quiz app.

MP Collins asked Wylie his thoughts in Tuesday’s UK Parliament hearing on the prospect of Facebook having the ability to monitor users with audio through its app.

“There's been various speculation about the fact that Facebook can, through the Facebook app on your smartphone, listen in to what people are talking about and discussing and using that to prioritize the advertising as well,” Collins said. “Other people would say, no, they don't think it's possible. It's just that the Facebook system is just so good at predicting what you're interested in that it can guess.”

“On a comment about using audio and processing audio, you can use it for, my understanding generally of how companies use it … not just Facebook, but generally other apps that pull audio, is for environmental context,” Wylie said. “So if, for example, you have a television playing versus if you're in a busy place with a lot of people talking versus a work environment.”

“It's not to say they're listening to what you're saying. It's not natural language processing,” Wylie pointed out. “That would be hard to scale. But to understand the environmental context of where you are to improve the contextual value of the ad itself (is possible).”

“There's audio that could be useful just in terms of are you in an office environment, are you outside, are you watching TV?”

Facebook denies the allegation that its app listens to users for the purpose of customizing ads.

Still, users voiced concerns about being monitored after noticing they've been targeted with ads for products they never expressed an interest in online, according to PJ Media, with many Facebook users reporting examples and alleged proof that the app is listening to their conversations.

Facebook has been found as well to suppress conservative views on its platform.