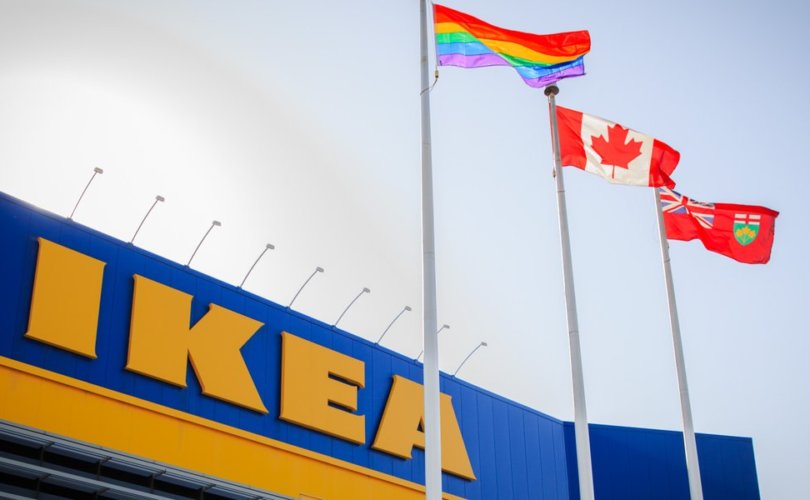 “At IKEA, caring for people, diversity and inclusion are embedded in our vision and in our values,” he said. “We strive to have a diverse and inclusive work environment where co-workers feel valued for their uniqueness, recognized for their diverse talents and where they can be themselves.”

We’re proud to raise the Pride flag at all our stores across Canada today in recognition of #IDAHOT and in support of the LGBT+ community and people of all orientations and gender identities. ❤️���������� #beyourself pic.twitter.com/LEJGTsERJH

Workers at the global home furnishings retailer joined in gay festivities throughout Canada, according to a company statement that noted that IKEA is a partner of Pride at Work and a global partner of Workplace Pride. The latter organization is based in the Netherlands and seeks to expand the LGBT agenda globally by setting benchmarks for the employment of homosexuals.

The British, European Commission, and Canadian governments, along with several other global corporations, also commemorated the day in concert with the United Nations.

Originally known as International Day Against Homophobia, the day marks the date 30 years ago when the World Health Organization removed homosexuality from the International Classification of Diseases. Several governments, as well as the UN and its various agencies, are celebrating the day, as are various globalist corporations.

For example, UK Prime Minister Theresa May tweeted: “International Day Against Homophobia Transphobia and Biphobia is an opportunity to celebrate the progress made in promoting LGBTQ rights. But we must also reflect that there is much more to do so that discrimination is consigned to history.” She was seconded by the UK foreign office and its representatives to the UN in Geneva.

Canadian Prime Minister Justin Trudeau released a supportive statement, saying his government is addressing the “unique needs of LGBTQ2 Canadians, and the persisting disparities they face” by funding “community-level organizations leading the work to bring about change. This year, Canada is releasing a $1 “Equality” coin to commemorate the 50th anniversary of the partial decriminalization of homosexuality in the country.

Elsewhere, Taiwan proclaimed that it is the first nation in Asia to legalize same-sex “marriage” to mark the day.

The Bayern Munich soccer team will celebrate by replacing the customary corner flags at a Saturday match against Eintracht Frankfurt with rainbow flags.

Australia’s biggest telecommunications company, Telstra, proclaimed its support. BASF board member Michael Heinz released a statement of support on Twitter. And the rainbow gay pride flag flew on top of the offices of city government in Glasgow, Scotland.

On the Int'l Day Against Homophobia, Transphobia & Biphobia, the UK is proud to be flying the rainbow flag. #IDAHOT: Against discrimination. pic.twitter.com/H1xyDHO35B

UNICEF tweeted: “Join us in speaking up For Every Child's right to live free from discrimination, no matter who their family is, who they love or how they identify.”

UN High Commissioner for Refugees Filippo Grandi said in a statement that his agency is working to ensure that “LGBTI asylum seekers and refugees are protected wherever they are…” The statement claimed that LGBTI people around the world experience human rights abuses and persecution in their home countries and thus deserve refugee in other countries where they may face even greater risks.