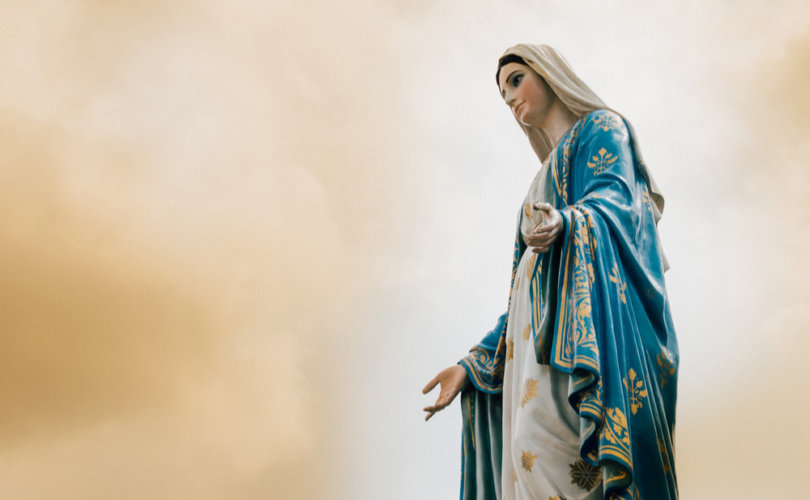 (LifeSiteNews) — A candlelit procession in honor of the Immaculate Conception was harassed by a group of about a dozen young Muslim men on December 8 in the suburban town of Nanterre, west of Paris. The faithful were the target of insults and death threats, ranging from “sons of bitches” to “Wallah, on the Coran I swear I’ll cut your throat.”

Some of the faithful were shoved and pushed, and the priest at the head of the procession — who received the death threat — was spat at. The Islamic aggressors tore a lighted candle from one of the Catholics and threw it into the group of faithful. No-one was injured, but the procession was forced to move quickly to its destination, where it was met by the police who had been called by the deacon when the group of youths closed in on the faithful. The thugs dispersed as soon as they saw the law enforcement officers, running away into the neighboring streets. No arrests were made.

The French mainstream media mentioned the aggression, and the Diocese of Nanterre has announced that it is lodging a complaint, however the overtly Islamic nature of the insults and threats was mostly glossed over.

In an unsigned statement published on December 11 by the diocese, the Church authorities wrote: “Two halts were to take place during the march. During the first stop, the procession was taken to task by several people who proffered gross and violent threats and insults. The candle of one of the faithful was torn from his hands and projected towards the participants. The procession started off again and continued, joined by the police, until it reached Sainte-Marie des Fontenelles … The diocese has contacted the public authorities so that the security of the faithful, who are legitimately worried, be fully assured as of now and in the future.”

The procession between the two churches of Saint-Joseph and Sainte-Marie de Fontenelles, which are about one kilometer apart, traditionally takes place in the evening of the Feast of the Immaculate Conception, and is duly “declared” to the local authorities. This year, about 30 parishioners took part, chanting hymns and carrying a statue of the Virgin Mary through the bleak, modern streets of Nanterre, where a large proportion of the Muslim population of the “Hauts-de-Seine” department resides.

According to one of the participants who spoke to alternative media outlet Boulevard Voltaire about the aggression, passers-by started insulting the Catholic faithful some 100 meters after the procession left Saint-Joseph. It was at that point that a dozen youths encircled the peaceful Catholic marchers, sneering at them and calling ever more violent insults: “bunch of whores,” “you’re not in a cathedral here,” “kuffaar” (infidels), “miscreants,” “get out of here, this place doesn’t belong to you.”

The Catholics decided to go ahead with their procession, while the group of youths spat on the road in their direction.

Minutes later, the Muslim youths headed toward the priest who was leading the procession, spitting and throwing cold water at him. As the aggressors moved closer, one shouted: “Wallah, on the Coran I swear I’ll cut your throat.” The priest answered calmly, trying to explain that the procession was “consecrated to the Virgin.”

But the thugs became even more violent: “You are on Allah’s land, f–k off!” Words were shouted in Arabic and some of the parishioners were violently jostled.

Several faithful who were part of the procession described the events on Twitter in corroborating threads, telling how the faithful decided to continue their march, loudly singing Marian hymns to cover the infamous insults that were still being yelled by the hostile crowd.”

According to these witnesses, the police were waiting for them on the steps of the church of their destination. No one was hurt but many of the participants were “shocked,” they said. The diocese said the police arrived quickly and protected the march until it reached its destination.

Some mainstream media outlets went out of their way to obfuscate the clearly Islamic nature of the anti-Catholic demonstration which may have completely escaped the attention of many French citizens. This is in fact a recurring attitude when Islamic terrorism or lesser incidents take place: The media, the public authorities and even the courts describe aggressions but never call the aggressors by name, speaking rather of unhinged or unbalanced individuals who were acting for unknown motives.

France’s interior minister, Gérald Darmanin, tweeted a message of support to the victims that is typical of this attitude: “Unacceptable acts. The freedom of worship must be allowed to be exercised in all serenity in our country. Support for the Catholics of France.”

The rise of the alternative media had its effect, though, forcing some mainstream media to speak more clearly about the nature of the aggression. Le Figaro, Valeurs actuelles, and even the unofficial daily of the French bishops, La Croix, quoted the obviously Islamic rants at the Catholic procession in its December 12 edition, adding that the words quoted on social media had been confirmed by the diocese.

Police protection was put in place around the two churches of the Fontenelles parish on Sunday.