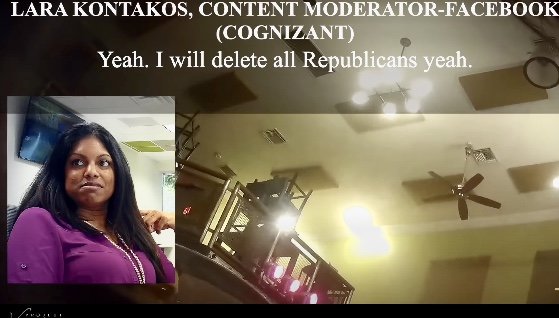 June 24, 2020 (LifeSiteNews) — A whistleblower on a company employed by Facebook to manage content on the site has released undercover video footage showing staff with an anti-conservative bias deliberately censoring pro-Trump, pro-conservative posts.

McElroy also revealed that Cognizant’s Facebook moderators were told not to censor a video of CNN host Don Lemon, where he said that white men are “the biggest terror threat in this country.”

“This is implying that white men are terrorists and so would typically violate (Facebook rules against “dehumanizing” speech). As this is a newsworthy event, FB’s content policy team is allowing a narrow exception for this content on the platform,” reads what appears to be a November 2018 memo given to moderators.

“Certainly there is obviously an intention on Facebook's part to have the back of people like CNN and hosts like Don Lemon,” McElroy says.

At one point in the newly released video footage, a Facebook insider tells a group of Cognizant content moderators that he’s thinking about deleting “every Donald Trump post I see on the timeline” of a Facebook user. As other moderators laugh and agree, another content moderator replies “Oh, OK, I thought I was the only one.”

“You don’t let any go, do you? Like, if you see a conservative post you just get rid of it, right?” a Project Veritas journalist asks a Cognizant content moderator. “Yes! I don’t give no fu*!s, I’ll delete it,” she answers.

“Even if it’s in policy, you’re deleting that, right?” the operative replies.

Another Cognizant content moderator said she would “delete all Republicans” on her last day at work.

“If someone is wearing a MAGA hat, I am going to delete them for terrorism and just going to like go crazy,” she says.

“Gotta get the Cheeto (Trump) out of the office,” Gordon says.

One content moderator told a Project Veritas journalist that she had deleted posts that just included the text “#MAGA.”

While acknowledging that “the actions of the content moderators may not be conclusive evidence of structural bias at Facebook,” Project Veritas CEO James O’Keefe says. “McElroy’s story raises serious doubts about the ‘under oath’ testimony of Facebook CEO Mark Zuckerberg to Congress where he claimed Facebook has no political bias.”

“It's very simple you've got a formula you've got a workplace full of mostly liberal-leaning Democrats, leftists, essentially,” McElroy concludes.

“They are being put in charge of moderating the entire public discourse. Facebook and Instagram are very large platforms. One of the biggest and our voices are in the hands of people who are almost entirely left-leaning.”

Earlier this month, Facebook promised to “protect political speech, even when we strongly disagree with it” after presidential candidate Joe Biden called for the social media giant to essentially censor Donald Trump’s re-election campaign.